It’s tough work to find a small scale wind energy charger that works. While we’ve seen innovative designs pop up over the last few years, it’s simply difficult to get enough wind coming through such a little device to charge devices. However, thanks to a company called Humdinger Wind Energy LLC, that might change with their new device called the microBelt. It is a piezoelectric turbine-based system that is purportedly 10 times more effective at gathering energy than other systems of the same size. 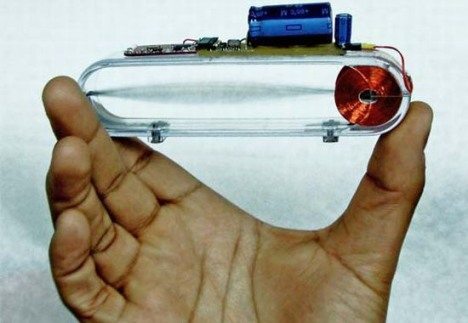 Humdinger (which, by the way, is a super cute name for the company) is a start-up of of just 6 people, and they’ve developed a new method of gathering wind energy on a small scale. The system uses aeroelastic flutter and vibration of a membrane – rather than a spinning turbine – is at the core of the Microbelt, which is intended to replace the batteries used in wireless sensor networks (WSN). It can be used in applications such as HVAC systems, using the airflow to power the device and therefore skipping the need for more expensive batteries. And because the system doesn’t mess with spinning turbines that can break more easily, it expects a long lifespan – as much as 20 years.

It’s inexpensive as well as efficient. Ecofriend writes “Power is produced in air flows from as little as 3 m/s. At 5.5 m/s of wind flow the power output is 2mW. Apart from efficiency, another advantage of the system is that it is cheap to produce, as the materials are very simple. Humdinger is progressing applications such as building monitoring and transit monitoring that will rely on such wind turbines.”

Energy Harvesting Journal reports that Humdinger is looking at using microBelt for applications such as sensors in HVAC units in buildings and transit monitoring – any place that has a steady air flow and currently relies on batteries that have to be replaced. The company is still gathering up funds to get the concept off the ground, and they’re aiming to work with select partners to tailor the harvester to specific projects.