Mitsubishi has announced its 2010 line up of 3D DLP Home Cinema TVs available in sizes up to a gigantic 82-inches. The large screen TVs utilize the same core Digital Light Processing (DLP) technology used in 3D movie theaters, which Mitsubishi says is up to 1,000 times faster than LCD technology, providing for a more realistic, sharper 2D and 3D viewing experience. 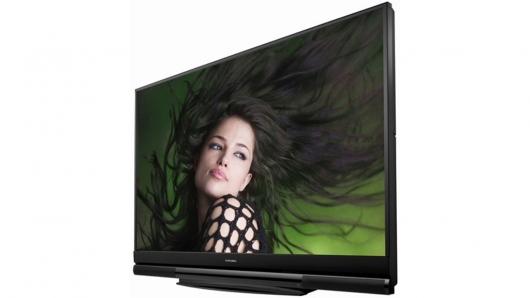 Since Mitsubish has actually been selling 3D-ready TVs since 2007, the new 638, 738, and Diamond 838 series 3D DLP Home Cinema TV models for 2010 represent the fourth generation of 3D-ready TVs from the company.

In addition to the 3D capabilities the newly announced TVs integrate 16-speaker 5.1 channel Dolby Digital surround sound to deliver home theater audio, without the need for separate components. They also include Internet media streaming capabilities with StreamTV enabling instant access to a range of online content via over 100 different applications including Vudu movies, Pandora, Flickr, Facebook, Associated Press and The New York Times.

Mitsubishi’s 738 and 838 series currently support the side-by-side 3D signal format. For support of other 3D formats, such as 3D Blu-ray standard top-bottom and frame packing, Mitsubishi 3DTVs will require the use of a 3D source device that outputs the 3D checkerboard format, a 3D source device coupled with the Mitsubishi 3D adapter, or other source devices that support checkerboard display formats for display of 3D games, 3D broadcasts from terrestrial/cable/satellite and 3D Blu-ray disc content.

The VIZIO M65Q8-H1 Quantum 65" 4K HDR Smart TV features amazing 4K Ultra HD picture quality, a decent sound quality, compatibility with Vizio’s Smart Cast 3.0, built-in Chromcast and Apple Airplay 2, and Voice Assistant support. With this high-end Smart TV you can easily improve your viewing experience for your favorite content, as you're guaranteed to get a breathtaking picture-quality for any of your favorite streaming services, including Netflix, Hulu, Amazon Prime Video, and more. All that makes the VIZIO M65Q8-H1 Quantum 65" 4K HDR Smart TV the perfect entertainment centerpiece for any family that’s enthusiastic about their Smart Home.
Read more
Home Gadgets

The EnviroKlenz Mobile UV Model is a mobile air purifier system that combines a high-end HEPA Filter with two germicidal UVC Lamps and an advanced chemistry technology to capture and destroy any fine airborne particles in the air. While its Medical-Grade HEPA Filter can accurately filter, capture and remove up to 99.97% of sub-micron particles from the air that are as small as up to 0.3 microns with a 99.99% efficiency, the system's built-in UVC lamps work in combination with its HEPA Filter by continuously shining a powerful ultraviolet germicidal radiation (UVC Light) on any of the airborne organisms that are collected by its HEPA Filter to effectively kill and destroy those same captured airborne particles. At the same time, the system's patented Earth Mineral Technology works to attack any surrounding VOC (Volatile Organic Compounds) that are present in the air, which then allows the system to break those down to a compound level. This is the main feature that sets this air purifier away from its competition, as it is a brand-new functionality that is not seen in any other air purifier models from other brands.
Read more

HP set to unveil printers for the “iPhone age