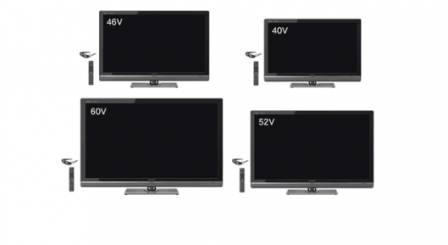 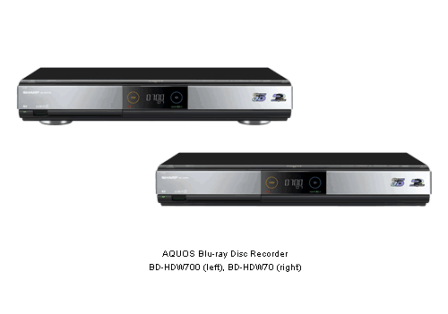 A 3D button on the remote enables what Sharp calls “pseudo” 3D conversion of images shot in 2D on a camera or camcorder. The conversion technology takes place in the glasses, which feature conversion from 3D back to 2D. This could be useful if a group is watching a movie in 3D but one person would prefer to watch it in 2D – all it takes is a push of a button on the glasses.

Both the LV and 2D LX Series also get an “around-the-screen” eight-speaker system with a Duo Bass woofer (LV/LX Series 60V/52V/46V-inch models), which includes two sub-woofers placed in opposition to reduce vibration. Sound reproduction is handled by Yamaha’s AudioEngine audio chipset, which has been specially tuned for the AQUOS and, according to Sharp, “reproduces sound with a spatial component that is ideally suited for 3D images.” 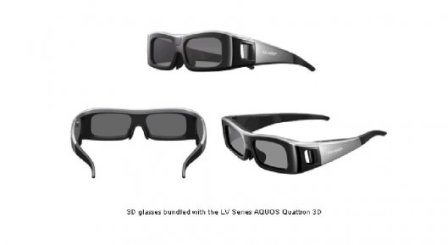 Additional features of the new Sharp range include support for access to the Internet via a wireless LAN router, expanded access to peripheral menus (like Blu-ray players) via the company’s AQUOS Familink HDMI cable connection, and a USB port for hard drive recording of digital content which can be controlled by the remote. The HDD recording also includes a “Frequently Recorded” function where the TV learns your most watched programs and records them automatically.

The iLive Indoor/Outdoor Dual Bluetooth Speakers are a set of portable dual Bluetooth speakers that can optionally be used with their removable 10" stakes to have them placed in the ground, featuring a waterproof construction, a set of dual speaker drivers for 360° omnidirectional sound, built-in controls, both an Aux Input port and a MicroSD Card slot for reading and playing music, along with FM Radio, Bluetooth 5 Connectivity with 33 ft. wireless range and TWS Dual Pairing, and a built-in rechargeable solar-panel battery that can be charged via electric-power or via solar-power, with it offering users up to 20 hours of battery life. All in all, these 2 portable dual Bluetooth speakers are perfect for enjoying music both indoors as well as outdoors, which for the latter, goes for just about any outdoors location, whether you're simply looking to throw a party at your back-yard and enjoy some of your favorite tunes, enjoy some relaxing music while at the beach, or even while camping.
Read more
Home Gadgets

The Lorex 2K Pan-Tilt Outdoor Wi-Fi Security Camera is an electric-powered smart outdoor camera that features a IP66 Weatherproof Rating, a high-end Pan-Tilt camera system integrated with a 4MP image sensor that can record video at 2K QHD resolution in a 360° FOV for full coverage that also boasts Digital Zoom, Color Night Vision and IR Night Vision functions, as well as an AI-Powered Person Detection functionality, along with a motion detection sensor, and a set of built-in motion-activated dual LED nightlights, and a 2-Way Talk System that's also integrated with a remote-activated siren, all while also coming equipped with a pre-inserted 32GB MicroSD Card (expandable to 256GB) for local storage of its 2K QHD video recording, plus both Wi-Fi and Ethernet Connectivity, and also Voice Assistant support for both Amazon Alexa and the Google Assistant, as well as Smart Home integration compatibility with Chromecast and Firestick. With the Lorex 2K Pan-Tilt Outdoor Wi-Fi Security Camera you're able to have an around-the-clock coverage of your property with access to multiple smart-recording functionalities that ultimately allow users to safely and reliably protect their household and/or place or business.
Read more
Home Gadgets

The SmartWings Roller Shades are custom smart motorized shades equipped with a built-in whisper-quiet motor powered by a large-capacity 2200mAh Lin-Ion rechargeable battery that offers around 4 to 6 months of battery life, all while also featuring multiple Smart Home capabilities, including wireless controls from their included remote control, as well as compatibility with Samsung SmartThings, In-App Controls from their Smartphone App, and even Voice Assistant support for both Amazon Alexa, the Google Assistant, and Apple HomeKit. All in all, these custom smart motorized shades are reasonably easy to install by yourself, as well as fairly straightforward to operate. With them, you can more conveniently operate the shades of your windows indoors, ultimately allowing you to have a more comfortable lifestyle.
Read more