Want to find the cheapest, smallest, and probably most effortless camera available? Still on the hunt? Well, here’s one you can think about buying, if you’re in Japan. You can at least add it to the list of other impossibly small digital cameras out there, that still look like digital cameras, at least. 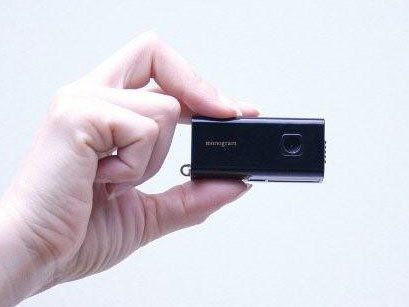 The Exemode SQ30m is a product from two companies: Pokedigi and Camera Folks. Their hard work brought the world this camera, which measures in at an astonishing 53mm x 19mm x 23mm, and weighs in only at 21 grams. We wish we could say that they managed to shove revolutionary sensors inside this little guy, but that’s not the case. What you will find, though, is a 1.95MP CMOS sensor which shoots at 1,280 x 1,200 resolution. There’s 64MB of on board storage.

Thankfully, you can put a microSD card inside. You are allowed to expand your memory up to 2GB, which should be plenty for on-the-spot shooting. Additionally, you’ll be able to shoot some video, too, but the resolution is only 320 x 240, and at 8fps, so it may not be to everyone’s liking. It’s available right now in Japan for 5,985 Yen — which is about $67 here in the States.