Halo Bike Lock Will Text You When Your Bike Gets Stolen

Apparently it’s Summer or something, because bike safety is taking a front-and-center approach the last few days. But that’s not a problem, especially when the concepts are some of the coolest things out there. In the latest effort, we’ve got a concept from designer Steve Hunt, which manages to attract our eyes in its shiny aesthetics, our curiosity with the features Hunt plans, and just the name alone gets us all intrigued. 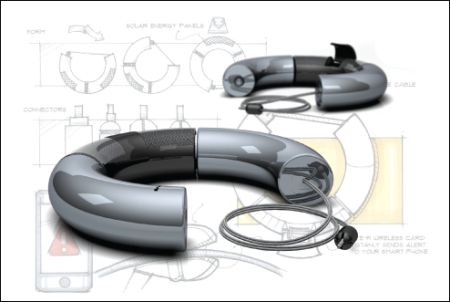 As you can see from the image, the body of the Halo Bike Lock is flexible enough to warrant the similarity between a heavenly item and itself. Hunt designed it so that the connector cable is housed within the frame of the lock itself, which should cut down on the thieves cutting your cable and having their way with your bike. But, that’s not the great feature. Hunt wants to have an integrated wirelesscard inserted into the lock itself, so that when (if) your bike gets stolen, the lock itself will notify you. So, if you’re close enough, you might be able to stop the thief before he makes off with your goods.

The text message would be sent out the moment the lock is tampered with. So, if the thief tries to break the lock off, or cut the cable with as little as would be exposed, you’d be notified that moment. It’s a great idea, and right now we wish it were more than just a concept drawn up, but we can hope that some deep-pocketed investor out there likes it just as much as we do. Now, just put the Halo Bike Lock on your Foldable Bike, and you’d pretty much have a bike that’s thief-proof.