A new portable digital recording unit has just been added to the BOSS guitar and bass family. Capable of recording up to four tracks simultaneously and playing back eight at a time, the BR800 also has high-end, onboard vocal and instrument effects and its own rhythm generator. Most of the user controls are now operated by a gentle tap on the device’s surface. 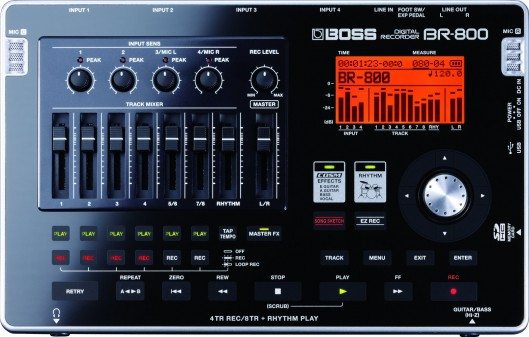 BOSS, a division of Roland, has been pretty successful with portable digital recording devices over the course of the last few years, and the new BR800 portable digital recording studio is another feather in their cap. The unit is capable of recording up to four tracks at any one time but up to eight virtual parts can be stored on each recorded track making up to 64 different parts available, with playback of up to eight at any one time being possible. 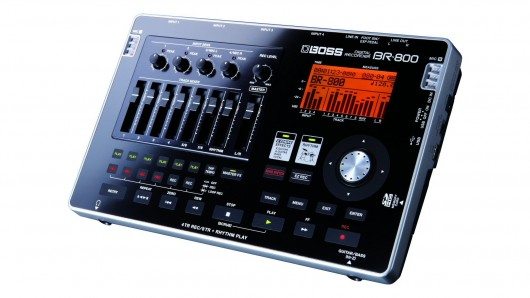 The BOSS BR-800 Digital Recorder records to SD/SDHC memory cards at a sample rate of 44.1 kHz and has a frequency response of 20 Hz to 20 kHz (+1/-3 dB) and there’s an extra dedicated stereo track for the onboard DR-880-like drum and percussion rhythm generator. As well as a set of four jack inputs and four XLR inputs for voice or instruments, the unit also features a separate guitar/bass input. There are also built-in stereo condenser microphones placed outermost left and right of the upper face.

Raised control buttons make way for touch sensor switches, although the familiar sliding mixers and level dials have managed to stand their ground. Menu options are displayed on a 128 x 64 dot backlit LCD screen and controlled by a toggle dial. To the left of the control dial is an option to engage the EZ Recording mode, which walks newbies through the recording process. Song Sketch activates a one-touch audio capture feature, which records in 16-bit linear stereo WAV format. 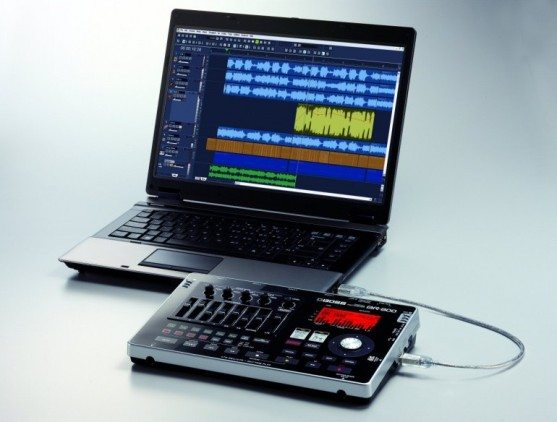 Recordings can be enhanced using effects collected from other flagship processors. Vocal doubling, harmonies and the ever popular pitch correction are made available via effects from the VE-20 vocal processor, COSM guitar/bass effects feature from the GT series processors and modeled acoustic-guitar body effects from the AP-1 preamp offers pro-quality mic’d-up sound and rich body tone to line-recorded acoustic guitar.

To the rear of the BR800, users will find RCA stereo line out sockets, a line-in mini jack and input for an expression pedal or footswitch. The digital recorder also sports a USB port for onward connectivity to a computer, where it can even be used as a control surface for Digital Audio Workstation software. In fact, the BR800 comes with Cakewalk SONAR 8.5 LE software with full audio loops and backing tracks on DVD.

The 11.37 x 7.24 x 2.28 inch device weighs just 2 pounds and runs on either the included AC power adapter or six AA-sized batteries. It’s available now for a suggested retail price of $524. Optional extras include a soft case and range of footswitch, expression and volume pedals.