After launching only two weeks ago, and simultaneously setting the broadcast and entertainment industries abuzz, ivi TV (pronounced ivy) now turns its focus to its primary goal — attracting consumers who seek relief from paying high cable TV bills and more freedom regarding how and where they watch TV. ivi TV delivers what we’ve all been waiting for — live TV on the Internet. The downloadable application offers retransmission of live broadcast TV signals from NBC, CBS, ABC, Fox, ABC, PBS, CW, Telemundo, and many more. 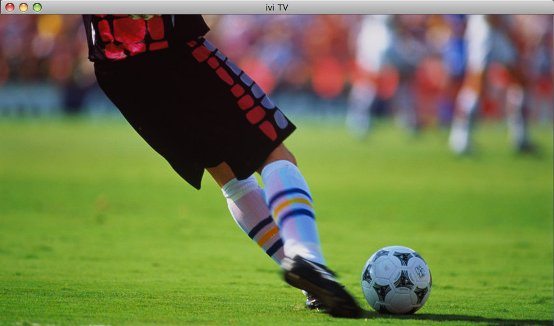 With more content available than Hulu, ivi’s service fuels a rising cord-cutting trend among many consumers looking for content they want to view directly from the Internet instead of through costly cable television subscriptions.  ivi TV’s legal offering, in conjunction with a legal movie-on-demand site like Netflix, for example, can literally save hundreds of dollars a year with its $4.99 monthly cost, in comparison to the average cable TV bill of $71.00. 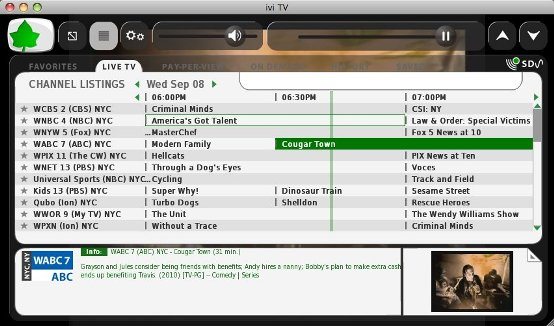 With a simple download of the lightweight app, anyone on the most basic computer can be watching live TV anywhere, anytime they have an Internet connection.  ivi TV’s push for consumers comes with a new lifestyle video created to demonstrate ivi TV’s TV anywhere’ offering. The video features voiceover talent from David H. Lawrence, who played the popular villain character Eric Doyle on the hit NBC show “Heroes”. 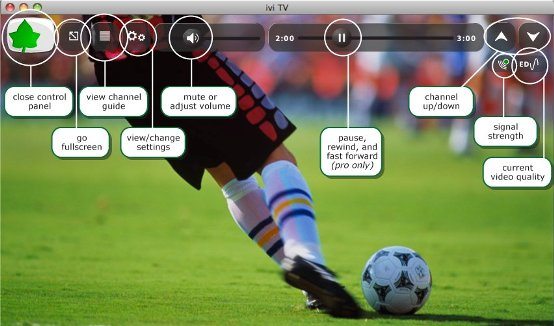 ivi TV™ is making it easier than ever for consumers to cut-the-cord and free themselves from the tyranny of paying high cable bills for access to live television content. In an ever-increasing new consumer trend, they can now easily access popular TV programming by downloading ivi TV’s app from its website. The online cable system’s app is easy-to-use and transforms nearly any internet-connected device into a “TV” allowing the user to watch live TV anytime, anywhere. 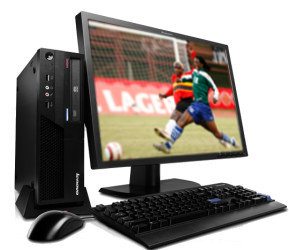 At $4.99 a month for all major network programming, it is significantly cheaper than cable TV bills, which average $71.00 a month. As cable TV bundle pricing goes the way of the landline telephone business, ivi TV now delivers what consumers have been waiting for since the dawn of the Internet boom – live television over the Internet, without buffering or other issues often experienced at video on demand (VOD) sites, like YouTube.

“We are the consumer’s and television industry’s new best friend,” said Todd Weaver, ivi founder and CEO. “ivi TV gives consumers a unique way to watch more television – on their own terms – while simultaneously solving significant technological problems for the broadcast industry as it provides a scalable distribution platform that includes a revolutionary security methodology to protect content. When breaking news occurs, people rush to sites like CNN.com that have a set cap on simultaneous viewers. That leads viewers to seek out news from alternative sources that are often user-generated sites that don’t pay for use of the content. ivi TV pays content owners and scales considerably better than any alternative platform.”

ivi TV is cross-platform, delivering live, continuous TV on Mac, Linux and Windows alike. The platform is available via a downloadable app for $4.99 a month after a free 30-day trial with pause, rewind, and fast-forward functionality available for an extra $0.99 cents a month. Additional broadcast channels, more mobile devices, and higher resolutions are product enhancements soon to be added.

“ivi TV is an experience people can feel good about. It is a legal online alternative to expensive cable services that have failed to innovate and offer consumers the choices they want. People are increasingly informed about their options and won’t continue paying for something they don’t need.  ivi TV enables consumers to carry their subscription with them accessing just the content they want, wherever and whenever they want,” Weaver added.

NCIS on CBS, House on FOX, Bones on FOX, Grey’s Anatomy on ABC, Supernatural on The CW, Smallville on The CW, Criminal Minds on CBS, One Tree Hill on The CW, Lie to Me on FOX, The Vampire Diaries on The CW, Gossip Girl on The CW, Desperate Housewives on ABC, Fringe on FOX, The Gates on ABC, How I Met Your Mother on CBS, Glee on FOX, CSI on CBS, The Big Bang Theory on CBS, Two and a Half Men on CBS, Heroes on NBC, 90210 on The CW, The Mentalist on CBS, Lost on ABC, CSI: NY on CBS, Family Guy on FOX, Castle on ABC, The Office on NBC, Brothers & Sisters on ABC, 24 on FOX, Law & Order: Special Victims Unit on NBC, Private Practice on ABC, Big Brother on CBS, The Simpsons on FOX, Chuck on NBC, Friday Night Lights on NBC, Prison Break on FOX, CSI: Miami on CBS, Persons Unknown on NBC, FlashForward on ABC, NCIS: Los Angeles on CBS, The Event on NBC, 30 Rock on NBC, Rookie Blue on ABC, Beverly Hills, 90210 on FOX, Medium on CBS, Friends on NBC, The Game on The CW, Cold Case on CBS, Modern Family on ABC, America’s Next Top Model on The CW, Law & Order on NBC, Scrubs on NBC, Dancing With the Stars on ABC, and much more.

-Adding a basic Netflix account to stream legal movies on demand and the annual cost for ivi TV and Netflix combined is only $167.00.

-Multi-tasking – watch live TV online while finishing that research paper, chatting with friends on IM, or connecting across social networks.

-No clunky hardware to install, or boxes to clutter.

-ivi TV is eco-friendly. No packaging or soon-to-be obsolete boxes.

-Minimal system requirements – ivi TV works on the most basic PCs and its technology adjusts the stream according to one’s available bandwidth.

-No set-up fees or other hidden costs that cable companies are infamous for.

-Be part of the future today. ivi TV is cutting-edge technology putting the user at the forefront of innovation ahead of offerings from Google TV and Apple TV.

ivi TV ™ endeavors to make the world a better place by providing a high-quality viewing experience while offering consumers what they want in the way they want it, with more choices, less hardware, and higher standards than other modes of online content delivery. At the same time, ivi TV increases eyeballs for channels and advertisers, continuing and adding to the live television tradition in an innovative and sustainable manner. Consumers, broadcasters and advertisers alike will agree that live television, most notably sports and news programming, is here to stay. The solution is ivi TV. And the time is now. ivi, Inc., is based in Seattle. For more information, please visit http://www.ivi.tv

The D-Link DCS-8300LHV2 is a Smart Home Wi-Fi Camera that features Full HD 1080p Video with 360º Adjustability and IR Night Vision, Two-Way Talk, Smartphone In-App Controls, and even support to multiple Voice Assistants. Overall, the D-Link DCS-8300LHV2 makes for a really solid Smart Home Wi-Fi Camera for you to go with. With it, you can monitor your home in a 24/7 basis and see everything that's happening inside it in a Full HD 1080p resolution, all while letting the camera's advanced AI-based person detection functionality notify you and even alert you to any motion detected outside. All and all, this is a great Smart Home camera to go with, especially when considering its very affordable cost, as well as its ease-of-setup, and that goes for whether you’re looking to take care of your children and/or elders, to keep an eye on your pets, or even to keep your home and family protected against any potential intruders.
Read more
Home Gadgets

The Atomi Smart Pathway Lights are a set of x4 10-watt smart Wi-Fi-enabled LED pathway lights that feature programmable lighting with adjustable colors, customizable schedules, and Voice Assistant Support. Overall, these smart LED pathway lights are extremely durable, very easy to install, and extremely easy to configure via their Smartphone App. Featuring a broad spectrum of 16 million hues of different colors, a tunable white light functionality, and Voice Assistant Support, these smart home-exterior LED lights are perfect for everyday use, no matter if its just another regular day or if you're celebrating a special occasion. With them, you can always keep your home's pathway safe to walk at all times, all with an added touch of elegance and coziness.
Read more
Home Gadgets

The TableCoaster is an ultra-durable anti-spill drink holder that can securely hold all your favorite drinks, making it the perfect drinking accessory for both your office space as well as your living room's sofa table. Featuring an ultra-durable construction and a super ergonomic design that combines a narrower Drink Adapter piece as well as a larger Drink Holder piece, this sleek anti-spill drink holder can cater to most drinking containers, including mugs and tumblers, as well as bottles and cans. All that makes this the ultimate anti-spill drink holder that you can currently get, which can be used by anyone to prevent spills around furniture, other people or even pets. Best of all, you can use it just about anywhere, starting from the comfort of your home office and living room all the way down to motor-homes or even boats.
Read more
Home Gadgets

The Echelon Connect Bike EX-5s is a smart exercise bike for indoors use that comes equipped with a 22” HD Rotating Screen, an Ergo-Adjust Resistance Knob with 32 levels of magnetic resistance, a 6” Fore/Aft Seat Lever and a Seat Height Adjustment Lever for adjusting the bike's seat position and height, a set of Adjustable Toe Cages on its pedals, and 2 Power Ports for charging your devices while working out. Coming designed for maximum comfort, smooth functionality and total immersion, this smart exercise bike is simply awesome. Overall, it's extremely comfortable to ride, as well as easy to adjust to different difficulty levels for easier or harder cycling workouts. Best of all, with an Active Echelon Membership, the sky as the limit, as both all of the Live and On-Demand Classes as well as the Echelon's Fitpass Programs can offer all fitness enthusiasts an ultimate away of transforming all of their workouts at home to ultimately get to the fitness level they so desire.
Read more

Sony PSP 2 to be announced January 27th in Japan