The Red Wii Bundle is heading to the US for $199 and so is the 25th anniversary red DSi XL bundle for $179. The new Wii Bundle, which as we mentioned is finished in a cherry finish, will include the new Super Mario Bros. game as well as a new Wii controller, which stuffs the extra sensing Motion Plus attachment into the standard Wii controller form factor.  It will also come with Wii Sports and the ability to stream Netflix sans disc. 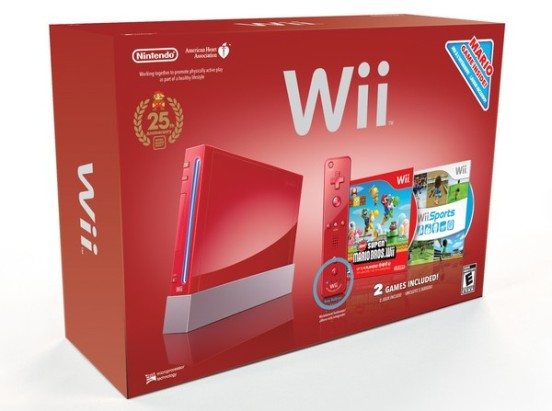 If you’re not interested in buying a whole new system you can purchase the new controller stand alone for $39.99.  Expect all three to hit the gaming market on November 7th. 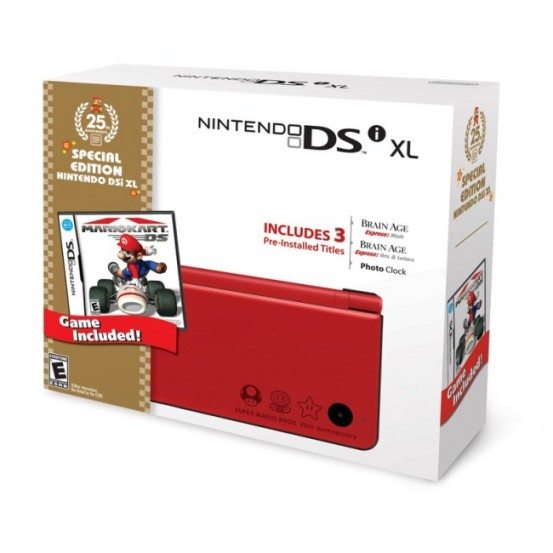 REDMOND, Wash.–(BUSINESS WIRE)–Nintendo has everyone’s holiday shopping list covered with an array of great new products. These include Mario™-red, limited-edition Wii™ and Nintendo DSi XL™ system bundles that celebrate the 25th anniversary of the Super Mario Bros.™ game on the NES™ and a new Wii Remote™ Plus controller that has Wii MotionPlus™ motion technology built right in. Nintendo already offers tremendous video game value, and these products will make it even easier for shoppers to find fun at a great price. All new products go on sale in North America on Nov. 7, and the limited-edition products will be available while supplies last.

“Whether shoppers want to add a cool new look to their gaming setup or expand their supply of controllers with an exciting game, Nintendo offers a great value for the holidays”

“Whether shoppers want to add a cool new look to their gaming setup or expand their supply of controllers with an exciting game, Nintendo offers a great value for the holidays,” said Marc Franklin, Nintendo of America’s director of Public Relations. “For anyone who is still on the fence about whether to join the world of video games, we’re offering many fun, easy, economical ways to get involved.”

Red Wii Bundle: This limited-edition Wii hardware comes in beautiful red to celebrate the 25th anniversary of the original Super Mario Bros. game. The bundle includes New Super Mario Bros.™ Wii and a new red Wii Remote Plus controller, in addition to all the other included items, like Wii Sports™ and a red Nunchuk™ controller. It will be available while supplies last at a suggested retail price of just $199.99.

Red Nintendo DSi XL Bundle: This special-edition Nintendo DSi XL bundle is also red in honor of the 25th anniversary of Super Mario Bros. and features three iconic Super Mario Bros.-themed graphics. The bundle comes with Mario Kart™ DS, which looks gorgeous on the extra-large screen. That’s in addition to the pre-loaded software of Brain Age™ Express: Arts & Letters, Brain Age Express: Math and Photo Clock. It will be available while supplies last at a suggested retail price of just $179.99.

Wii Remote Plus: This new controller combines the original, iconic Wii Remote™ controller with built-in Wii MotionPlus functionality. The compact Wii Remote Plus controller offers players precision motion controls all in one unit. It becomes the new standard Wii controller, and will be available from now on in all Wii hardware packages and bundles, as well as sold separately at a suggested retail price of $39.99.

FlingSmash™ Bundle: The new Wii game combines the hands-on fun of tennis with the nonstop action and instant gratification of pinball. It requires use of the Wii MotionPlus accessory, so it seemed natural to bundle it with the new Wii Remote Plus controller. For a suggested retail price of $49.99, shoppers get to enjoy both the game and the controller in one package.

Remember that Wii and Nintendo DSi feature parental controls that let adults manage the content their children can access. For more information about this and other features, visit http://wii.com or http://www.nintendodsi.com.

About Nintendo: The worldwide pioneer in the creation of interactive entertainment, Nintendo Co., Ltd., of Kyoto, Japan, manufactures and markets hardware and software for its Wii™ home console and Nintendo DS™ family of portable systems. Since 1983, when it launched the Nintendo Entertainment System™, Nintendo has sold more than 3.4 billion video games and more than 565 million hardware units globally, including the current-generation Wii, Nintendo DS, Nintendo DSi™ and Nintendo DSi XL™, as well as the Game Boy™, Game Boy Advance, Super NES™, Nintendo 64™ and Nintendo GameCube™ systems. It has also created industry icons that have become well-known, household names such as Mario™, Donkey Kong™, Metroid™, Zelda™ and Pokémon™. A wholly owned subsidiary, Nintendo of America Inc., based in Redmond, Wash., serves as headquarters for Nintendo’s operations in the Western Hemisphere. For more information about Nintendo, please visit the company’s website at http://www.nintendo.com.

Tunebug Shake Turns any Helmet into a Personal Music System

The Tunebug Shake is a device that will transform the current landscape for mobile speaker products.  It is a small device that can be...
Read more
Home Gadgets

The Harmony Remote Control App is now available for Android devices. The app will have all the features found in Logitech’s physical Harmony Remotes,...
Read more