Gaming has exploded in the last few years, with consoles and games being introduced, seemingly by the minute.  Of course we’ve all heard of the award-winning game Rock Band.  LevelUP has recently released a stylish storage ottoman to accommodate and house all of Rock Band’s instruments and accessories, for a seemless and smart storage solution. 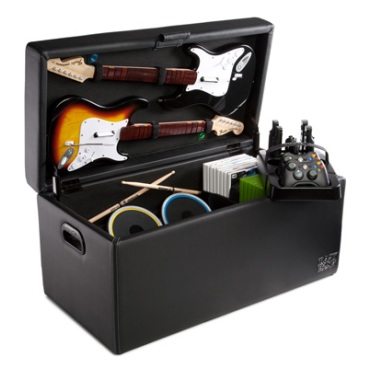 Seattle, WA – LevelUp©, the only company making officially licensed storage solutions for Wii™, XBOX®, DS®, PlayStation® and Rock Band, is stoked to announce the availability of the Rock Band Ottoman.  The company knows that being a rock star requires a lot of loose gear and accessories, which can clutter the home and eventually make band practice less fun.  To solve the problem, LevelUp constructed this ottoman out of solid wood and sleek leather-like exterior, durable enough to withstand the most destructive performer.

The Rock Band Ottoman features fitted drum stick loops, fitted side accessory pockets, and a Velcro guitar loops to keep your gear secure.   Users can comfortably fit two axes, one drum set, one microphone, and one drumstick set.   There’s also a safety hinge lid and side handles for easy lifting in case have a gig at your friend’s house, as well decorative lid stitching because every band needs a little flair.

“There are a lot of gamers who want to play like Green Day, but not necessarily live like them,” says Jason Lemelson, President of LevelUp.  “This product grants players the ability to shred their guitars, not their living rooms.”

JCPenney.com and Kohls.com are currently selling the “Skull and Snakes” version online for $179.00 while Costco stores are carrying the “Back in Black” version for $89.99.  Compatible storage trays for games/DVDs and other gaming gear are available separately at LevelUp’s array of prestigious retailers.  For more information, please visit www.levelupgear.com, or find them on Facebook and Twitter.

LevelUp®, a division of Slam Brands Inc., makes the only gaming storage officially licensed for Nintendo Wii, Nintendo DS, Sony PlayStation and Rock Band, as well as Xbox 360 compatible products.  With the many gaming consoles and accessories that are available in the market, gamers use LevelUp towers, ottomans, trays and wall-mounts to help organize and store gaming accessories smartly and with style.

The Ampere Side Pocket Fanny Pack is a smart fanny pack that's completely waterproof, and also integrates both a Qi-Wireless Charger for your Smartphone and an internal RFID blocking sleeve. By using this game-changing smart fanny pack, you can conveniently recharge your Smartphone's battery via Wireless Charging while you're on-the-go. While the fanny pack's versatile design and its full-waterproof outer layer give you a very convenient pack to carry your daily essentials with you, its RFID blocking sleeve and Qi-Wireless Charging Power Bank make it a great gadget to have with you during the time you're traveling.
Read more
Miscellaneous Gadgets

With the world facing a global pandemic, people spend more time at home and more time online. This article covers how a VPN can protect you from cybercrime.
Read more
Miscellaneous Gadgets

The JGMaker A5S 3D Printer features a robust construction and a great performance overall, and offers you a large printing size of 12" by 12" by 12. 6" with several cool printing features. Featuring a fairly easy set up process, as well as several different functionalities and safety features like Smart Assistant Auto Levelling, Filament Run Out Detection, and   Power Failure Protection, this 3D Printer literally packs everything you need to get you started on 3D Printing, and that goes for any begginer or expert.
Read more
Miscellaneous Gadgets

Texas Hold’Em is one of the most popular Poker games ever, but playing it requires certain qualities for you to be successful. Here's what you need to know.
Read more