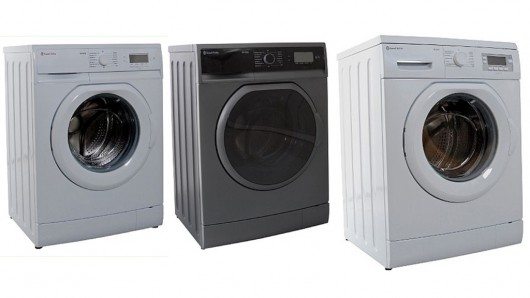 Doing the laundry takes a ton of time.  I remember when I was young, asking my mom what she was doing for the day.  “Doing laundry”.  “All day?”, I would ask.  This was before I lived on my own and had to do the chore myself.  The Wash and Dry cycles take for ever…….FOR ONE LOAD!!!!   Am I telling anyone anything new?  No, I’m aware most are familiar with a washer and a dryer, and how long it takes. But that’s why the new revolutionary washing machines by Russell Hobbs is such a dramatically different approach to washing clothes. This new line conserves water, energy and has a “super rapid wash” cycle, rinsing and spinning a load of lightly soiled clothes in a world record time of just 12 minutes, as opposed to an average 90-minute wash cycle.

The time and water savings come courtesy of a twin jet system that injects detergent and water onto the dirty laundry via two nozzles instead of one. Russell Hobbs says its 12-minute washers can save two years and four months of washing time over the average adult’s lifetime, while cutting energy usage by 30 percent and water consumption by 15 percent, which equates to saving enough water to fill 17 average-sized swimming pools. This is based on the average machine using 23.7 gallons of water compared to the 12 minute cycle using 7.7 gallons, five times a week.

The 12 minute cycle won’t do the job on heavily soiled laundry, which will require using one of the machine’s 14 other programs. Other features include extra spinning and rinsing programs, variable temperature, spin speeds and a delay start function. The machine also has a half load detection system to cut washing time, water consumption and energy on certain programs.

Currently, the Russell Hobbs 12 minute wash cycle machines are only available in the UK through ASDA direct, where prices start at $399 for a white 15.4-lb load model, $484 for the 15.4-lb Graphite model and $516 for the white 20-lb load model.

Next Gen iPad 2 to get new screen, case and UMTS & CDMA offering