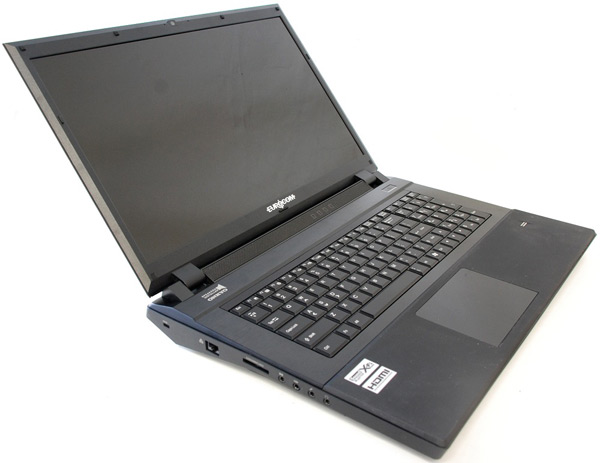 Eurocom has with a laptop that could truly replace your desktop.  There first intro was the ultraportable Monster 1.0, packing the kind of power reserved for larger-screened desktops.  Now there’s the 17.3-inch Scorpius.

While supporting up to 32GB of RAM isn’t too much to brag about, the Scorpius can optionally carry two of NVIDIA’s GeForce GTX 680Mgraphics chips with the full 4GB of video RAM per piece. That’s more graphics memory than the total system memory of some entire PCs.  Eurocom can optionally slot in two of AMD’s Radeon HD 7970M, or step down to a single graphics core.  Couple that with a quad 2.9GHz Core i7 and four drives, and you’ve got quite a piece of hardware. The Scorpius starts at $1,793, and adding the dual 680M option will ticket at $2,857.

Check out the full press release and video…

Eurocom Launches The Scorpius With 8 GB Of Video Memory With Dual NVIDIA Geforce GTX 680M And Intel Core I7 – 3920XM, 4 Storage Drives And 32 GB DDR3-1600 RAM To Be The Greatest Notebook Of All Time

Driving the system is an optional Intel Core i7-3920XM Processor Extreme Edition running at up to 3.8 GHz with 8MB of L3 cache, which delivers exceptional high-definition multimedia, multi-tasking and multi-threaded performance. These high-performance 3rd Generation Intel Core i7 Processors allow users to simultaneously run multiple applications at the same time — all with increased performance. The EUROCOM Scorpius supports Intel’s Extreme tuning Utility to allow users to tweak the performance of their system to whatever they choose. Up to 32GB of superfast DDR3 1600 SODIMM memory is also supported via four sockets. With such massive amounts of RAM available, the Scorpius becomes a great tool for virtualization and high performance computing.

In the EUROCOM Scorpius, up to 3 storage drives (SSD, HDD, Hybrid HDD) are offered plus an mSATA drive. With these storage configurations, Intel Smart Response Technology is supported, it is designed to give users enhanced system performance and responsiveness. Smart Response Technology is an intelligent caching setup that monitors data reads and writes to your storage drive and caches the most used or frequently accessed data. The Scorpius supports RAID 0/1/5/10 for increased storage performance or redundancy.

The EUROCOM Scorpius is the ultimate in Multimedia Entertainment system with support for Sound Blaster® X-Fi™ MB2, subwoofer, 2 watt speakers and external 7.1CH audio output support. Sound Blaster® X-Fi™ MB2 software suite is a powerful audio platform equipped with state of the art audio technology and THX TruStudio Pro along with a host of other software to enhance the audio of games, movies and music. The Scorpius has many connectivity options to allow users to connect the system to external displays for gaming for video streaming including: HDMI 1.4a, S/PDIF, Display Port 1.2.

The EUROCOM Scorpius comes with an illuminate backlit full size keyboard with numeric keypad. The backlit keyboard helps to increase usability in dim lighting conditions, to ensure operators can see the keyboard in nearly any environment.