How Drones and Robots Helped the Notre Dame Fire

As the Notre Dame Fire story has dissipated after 2 weeks, it’s worth mentioning that to aid them in their heroic efforts to contain the flames, the fire department deployed a number of technologies, among them drones and a firefighting robot called Colossus.

The camera-equipped drones — a DJI Mavic Pro and Matrice M210 — provided the team on the ground with invaluable close-up and real-time aerial data about the intensity of the fire, its position, and how it was spreading. Thermal imaging cameras, if attached, would’ve allowed operators to see through the billowing smoke and identify hotspots, too, but a spokesman said the drones played a vital role in helping to prevent further damage to the cathedral.

An increasing number of fire departments around the world are turning to drones for such activities, in part because of their ability to be quickly deployed, as well as being highly versatile and more cost-effective than helicopters.

With a steady stream of information being sent from the drones to the team on the ground, those organizing the response were able to use the data to call the next move. The ferocity of the fire meant there was a heightened risk of heavy wooden timbers falling from the cathedral’s burning attic, increasing the danger for anyone inside. With that in mind, the response team opted to deploy Colossus, a robot firefighter capable of tackling serious fires from within a burning structure. 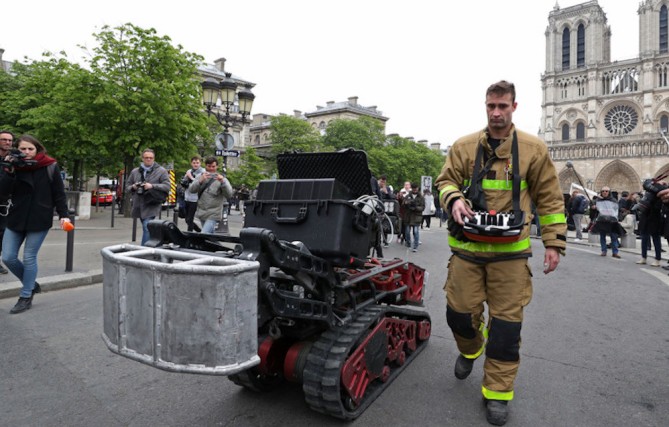 The rugged robot was built by French tech firm Shark Robotics and features a motorized water cannon that can be operated remotely. A high-definition camera with a 360-degree view, a 25x zoom, and thermal imaging capabilities are also part of the package, giving the operator a comprehensive view if and when the 1,100-pound robot needs to travel beyond the line of sight.

While Colossus is admittedly a slow mover, with a top speed of 2.2 mph, its ability to tackle all kinds of terrain makes it an invaluable piece of equipment for the Paris Fire Brigade and others that use it. With some news reports suggesting Notre Dame could have been just half-an-hour from further collapse, the technology used at the cathedral on Monday demonstrated its worth as it complemented the work of hundreds of firefighters risking their lives to tackle the blaze.

Facebook is trying to lasso teens back into their fold with a new meme app called LOL. The company has been working on the...
Read more
Computers

GM’s free Onstar iPhone and Android apps are now available.  If you own a compatible OnStar enabled vehicle, you’ll be able to remotely unlock...
Read more