Artificial intelligence’s influence, perspectives, and benefits are not always clear. Regarding its advantages, AI would have a low error rate when compared to humans, if coded properly. It features incredible precision, accuracy, and speed. It’s not affected by hostile environments, proving able to complete dangerous tasks like exploring in space, as well as endure problems that would injure or kill humans.

Earlier this past month, Ignite Seattle took place. Ignite Seattle is the largest open submission public speaking event in the Pacific Northwest. Going back to the AI subject, machine-learning technology packs amazing potential, proving able to help fix any little problem in life that no commercial gadget can. For Amazon engineer Ben Hamm, that problem was stopping his cute, yet bloodthirsty, night-hunter cat Metric from bringing home dead and half-dead prey in the middle of the night.

During this year’s Ignite Seattle, Hamm gave an entertaining presentation about his issue with Metric. To put it simply, Hamm connected the cat flap in his door to an AI-enabled camera (Amazon’s own DeepLens) and an Arduino-powered locking system. All this just to stop his lovely cat Metric from following his basic instincts. Hamm collected and hand-labeled around 23,000 training images, which makes it a lot of data sorting. 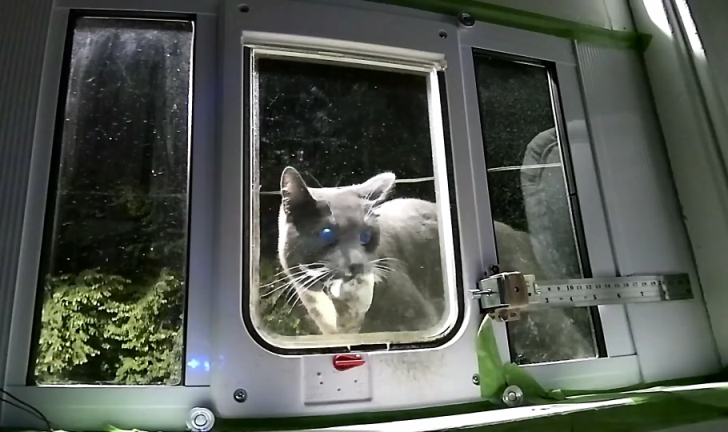 Hamm wanted to use machine-learning technology, so he loaded the camera with machine vision algorithms that were programmed by himself. These algorithms identified whether Metric was coming or going and whether he had prey in his mouth. The machine would go through three “Yes or No Stages”. “Stage 1” would check if there was a cat inside the video frame, or not. If there was a cat being recorded, “Stage 2” would occur, judging if the cat was coming to or leaving the house. And finally, if a cat was coming into the house, or Metric to be specific, “Stage 3” would check if he was carrying a prey or not. If the final stage’s answer was “yes,” the cat flap would lock itself for 15 minutes and Hamm would get a text with the pictures through an Imgur (imgur.com) integration.

To top it off, since Ben would obviously feel bad for all the other animals, the system proceeds to send a donation, or “blood money” as Hamm calls it, to the National Audubon Society, which protects the birds that cats love to prey on.

This is a great example that perfectly shows us the everyday utility of AI. Just like Hamm presented to the people at Ignite Seattle, a little bit of intelligence can go a long way… even proving able to outsmart a cat.