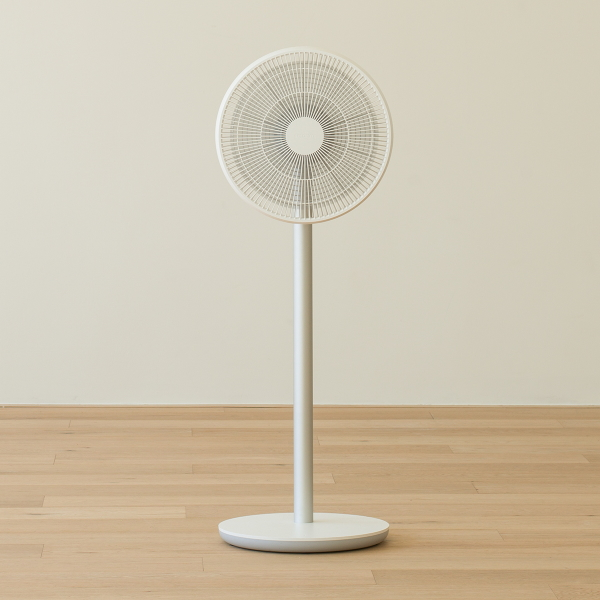 As we all know, another college year is about to start. However, as the Summer is still not quite over, keeping your college dorm room refreshed during the first few weeks of each college year is very important (and the same goes for the last few months of each college year), as a comfortable temperature within the room allows students to focus less on how hot it is outside and more on their studies. With that said, if you are a college student looking for the best fan to keep your room cool, then the Smartmi Standing Fan 2S might be the perfect choice for you. If you want a smaller alternative, then consider getting a table fan by Crompton.

The Smartmi Standing Fan 2S is a portable and App-Enabled cordless fan that’s powered by a powerful built-in lithium-ion battery, and as such, it can ultimately offer students up to 20 hours of battery life per each full charge.

Not only that, but thanks to the fan’s innovative, powerful, and super-silent DC variable frequency brushless motor, which can easily keep the fan running at a whisper-quite level, students are delivered a cooling sensation that mimics a fresh and natural breeze, all without ever disturbing their studies with a single motor sound.

Lastly, thanks to fan’s cordless design, college students can use the Smartmi Standing Fan 2S at anytime and take it with them anywhere, while the fan’s reliable WIFI connectivity provides students with easy smartphone controls for the fan.

Now, let’s take a more detailed look at the fan and check everything that it has to offer.

As mentioned before, the fan’s cordless design ultimately allows college students to use the Smartmi Standing Fan 2S at anytime and take it with them anywhere.

The fan’s main support is its high-quality high-grade anodized aluminum alloy pole/pillar, which not only is very resistant against corrosion to ensure that the fan gets a long-term use, but also makes the fan ultra lightweight for transportation. 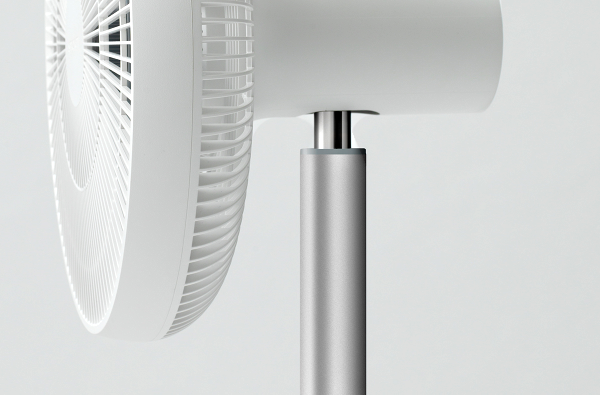 The fan is powered by its previously mentioned innovative, powerful, and super-silent DC variable frequency brushless motor, which actually features an ultra-quiet operation. As such, the fan’s motor can run as low as 28.6dB (at the lowest speed setting), allowing students to use the fan both during their studies as well as during a peaceful and restful night of sleep without ever getting disturbed by the fan’s noise, all while delivering a refreshing and cooling sensation that mimics a fresh and natural breeze. 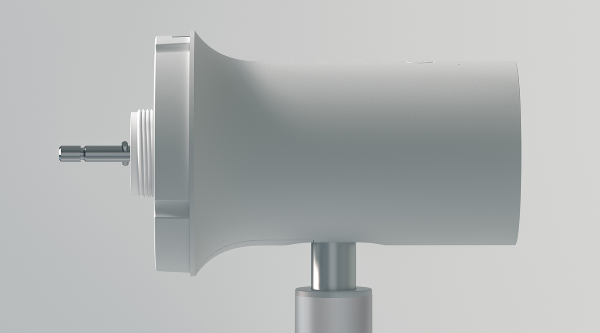 Not only that, but the fan’s brushless motor is free of carbon brush wear, which substantially ensures a reduced kinetic energy loss, thus prolonging the fan’s service life while also improving its energy efficiency during operation.

Othern than its premium DC inverter motor, the Smartmi Standing Fan 2S also features a 7-blade leaf-like design, which means that it comes equipped with a total of 7 fan blades that can create ample and comfortable breezes to deeply recreate the natural wind feel. 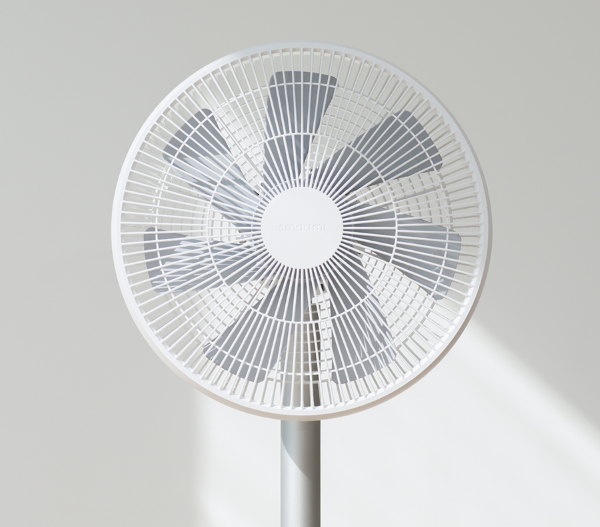 The fan’s gold 7-blade design displays a larger blade area and a wider air supply area than most other fan models on the market, which ultimately provides users with a more powerful wind power, all while using a very low amount of power to achieve that. 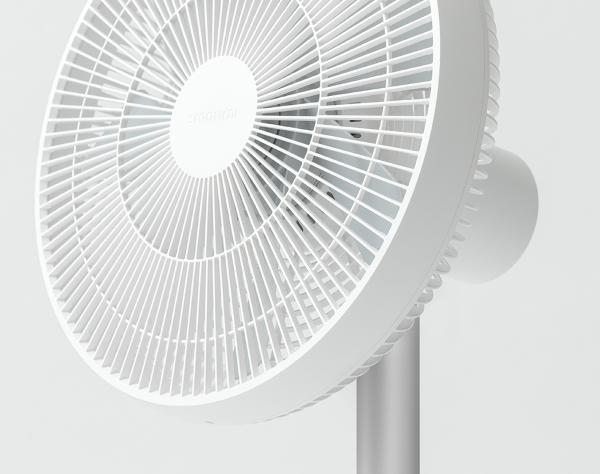 Furthermore, when compared to both 3-blade and 5-blade designs that can be found on other fan models that are available on the market, the Smartmi Standing Fan 2S’s 7-blade design completely eliminates heavy-impact clusters of the air while also allowing air to pass through smoothly.

As such, the fan’s blade radius is optimized to cut down on energy use while providing users with the previously mentioned high potential fan speeds. Both the fan’s front and rear grills are designed to reduce resistance against airflow as well as to reduce the fan’s motor noise during its operation.

Lastly, it’s also worth to point out that just like the fan’s central pole, all of its other components (its DC motor, 7 blades, etc.) are all made of weather-resistant ABS materials, which ultimately increase the fan’s longevity while also retaining their vivid “pearly white” color for a longer period of time. 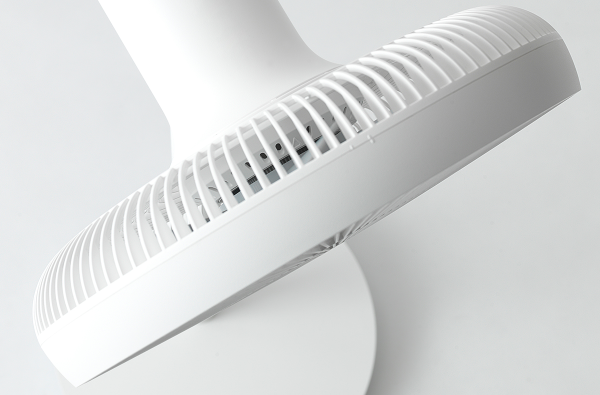 The fan’s interface features a total of 4 Speed Information LEDs that glow in a bright green color (the higher the fan’s set speed, the more LEDs will light up), one single Wi-Fi Connectivity LED (informs users about the fan’s connectivity status via Wi-Fi), and one single button that can be used to turn the fan On and off, as well as for the fan’s gear selection. 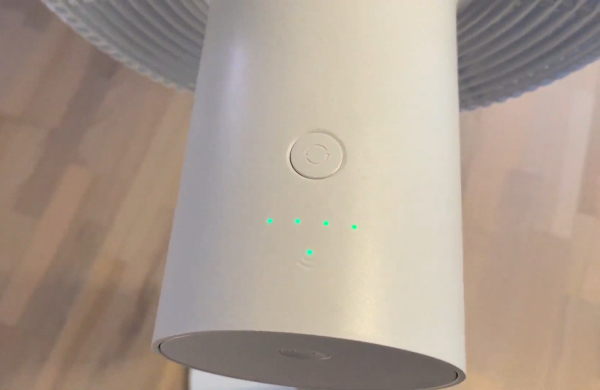 Thanks to the button’s dual-configuration, this means that users can also use the button to easily configure the fan’s speed modes.

There’s also a button located at the back of the fan that can be used to enable or disable the fan’s “Side-to-Side Turning” (blowing air while moving from side to side). Disabling this mode will prevent the fan’s rotation, forcing it to stay stationary. 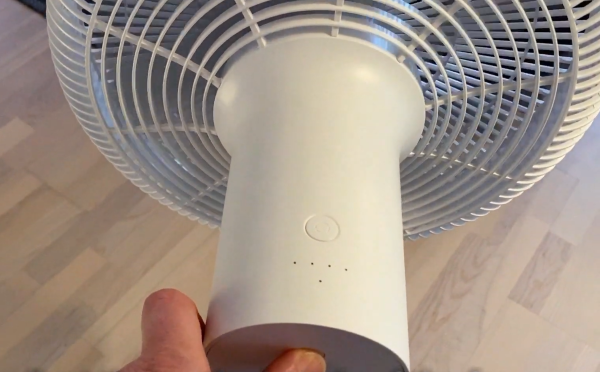 It”s also important to note that users can have even more control options by using the fan together with its proprietary Smartphone Companion App, called the Mi Home App (also known as the Mijia App) – which we’ll discuss at the end of the article.

Since the fan was designed to be easily assembled right out of the box, users get a hassle-free assembly with this model. The package includes just a few attachable parts (the fan’s components) that are all part of the main unit.

Furthermore, while the fan’s blades and grills are particularly prone to dust build-up (just like any other fan model out there), thanks to the fan’s simplified design, users also get an easy and convenient way of dismounting the unit to have an easier time cleaning it.

Then, as soon as you’re done cleaning it, reassembling the unit is just as easy as the first time you’ve installed it; meaning that setting up the fan is always quick and simple.

As mentioned at the beginning of the article, this portable and App-Enabled cordless fan is powered by a powerful built-in 33.6 Wh lithium-ion battery pack that can offer up to 20 hours of battery life (at the lowest speed setting / speed level) while also supporting cordless use. 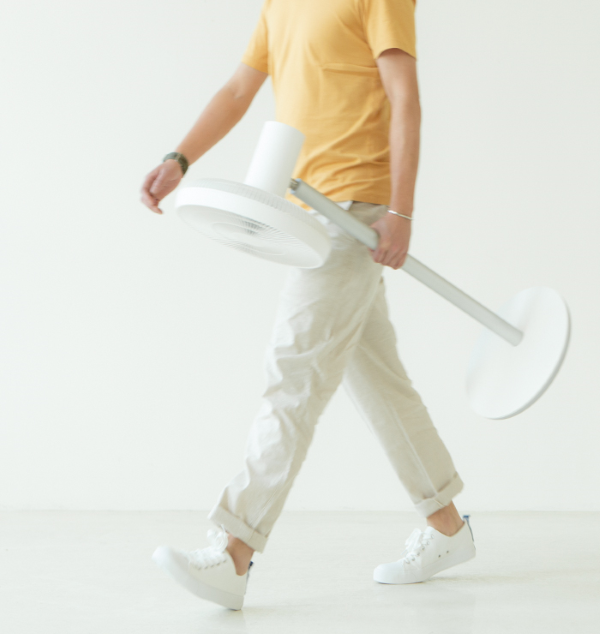 Thanks to the fan’s single button (which can be used to turn the unit On and off), users can also use it for the fan’s gear selection, meaning to change its speed settings in a very easy and convenient way.

By using this button, users can get up to 100 stepless speed settings as well as 4 different oscillation angles, making it easy for all users to find a more comfortable way to have the fan blowing a refreshing gust of cool air to their comfort zone.

As mentioned earlier, this portable and App-Enabled cordless fan also features Wi-Fi connectivity, which is exactly what allows users to connect the fan to its proprietary Smartphone Companion App, which is simply called the Mi Home App.

The Mi Home App is available to download for free, and that goes for both iOS and Android devices.

Thanks to the Mi Home App, users can easily control the Smartmi Standing Fan 2S in a very simply way. The App allows users to control both the fan’s speed settings and its 4 different oscillation angles.

If you’re interested in getting it, each unit is currently going for $130. You can order yours right now, directly from Smartmi’s corresponding Amazon shopping page (who the company is partnered with to sell its products), which you can access by clicking here.

Some Complaints about Apple’s New iOS 4