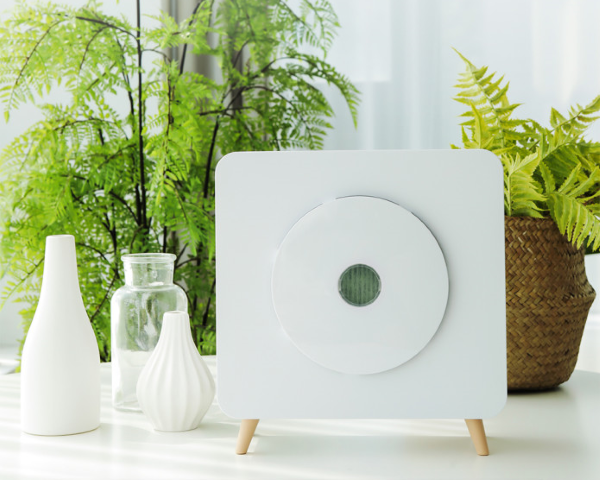 Nowadays, air purifiers are a must-have gadget for anyone that commonly suffers from allergies and/or asthma. Not only that, but air purifiers can actually help any person to breathe better when staying indoors, as the air we breathe indoors can sometimes be of a worst quality than the air we breathe outside. This is mainly due to the common allergens and harmful particles that can potentially be floating around and carried by the air indoors. Additionally, external air pollutants like dust, VOCs (Volatile Organic Compounds) and other airborne contaminants can also easily get caught in the air circulating inside your home. With all that said, it’s obvious that the best way to prevent any harmful particles from floating around the air inside your home is to get a small and portable high-end air purifier that’s equipped with a True HEPA Filter, as that would ultimately allow you to efficiently filter out those air pollutants and contaminants from the air indoors. This brings us to the Aiwana Mam 2 Air Purifier.

The Aiwana Mam 2 is a simple and stylish high-end air purifier that operates at a low-noise level and with a low power consumption, coming equipped with a triple-layer filter to effectively purify the air indoors.

Coming equipped with the latest air filtration technology, the Mam 2 can effectively filter out micro dust as small as 0.3μm. What’s even better about this air purifier is that its three high-end filters are also infused with natural green tea and other corrugate ingredients that ultimately give it a deodorizing and a disinfecting features, which both work together with its air purifying functionality.

Now, let’s have a more detailed look at this high-end triple-layer filtered air purifier and check out how the Aiwana Mam 2 is designed to work, and also see everything that it has to offer you.

Starting with the device’s size, this air purifier comes at a reasonably compact size, as its interior parts were specifically designed with only the essential components to ultimately have the Mam 2 effectively purifying the air inside your home. As such, this air purifier only measures 10.23 inches long by 4.92 inches wide by 10.82 inches tall. Additionally, the device itself is also reasonably lightweight.

Moreover, the air purifier’s slim design combines an ultra-minimalist white-colored body with a simple, yet ultra-durable wooden stand, which ultimately give it an elegant and fairly modern look, thus allowing the Mam 2 Air Purifier to easily blend in with the rest of your home décor, as well as to remain discrete, no matter where you place it within your house.

Now, let’s move on to the air purifier’s main components. Apart from its unique designs, this high-end triple-layer filtered air purifier comes boasting the latest Air Filtration Technology that you can find available on the air purifiers market. In other words, and as said before, the Mam 2 Air Purifier comes equipped with a Three-Layer Filtration System that ultimately allows it to effectively purify the air indoors.

This Three-Layer Filtration System works by combining a Hypoallergenic Catechin Filter with a H13 True HEPA Filter, as well as with a specialized Corrugate Filter for deodorizing and disinfecting that’s made with high-functioning Impregnated Active Carbon.

To put it simply, the air purifier’s Three-Layer Filtration System is exactly what allows the device to effectively filter out any harmful particles that can potentially be carried in the air we breathe indoors, including anything from larger dust particles, all the way down to ultra-microdust as small as 0.3μm.

So, starting with the first component of its Three-Layer Filtration System, we have its Hypoallergenic Catechin Filter (which basically works as the air purifier’s Pre-Filter),

This Hypoallergenic Catechin Filter comes infused with natural green tea extract, which consequently provides the air purifier’s first air-filter and air-purification layer with an antibacterial effect of another level. Thanks to that, its Hypoallergenic Catechin Filter is capable of completely eliminating any captured germs and viruses, all the way up to a 99.9% efficiency rate.

Secondly, we have the air purifier’s H13 True HEPA Filter, which is the unit’s most complex internal component. This high-quality medical-grade H13 True HEPA Filter is exactly what makes the Aiwana Mam 2 Air Purifier capable of effectively filtering out any harmful particles that can potentially be carried in the air, including just about anything from the larger dust particles, all the way down to ultra-microdust that’s as small as 0.3μm.

Essentially, this H13 True HEPA Filter is made of melt-blown non-woven fabric (which are the same type of material used on medical-grade surgical masks), and this basically makes the Mam2 capable of accurately capturing around 99.97% of ultra-fine microdust that measure all the way down to just PM0.3μm by simply using static electricity.

Finally, as the third component of the air purifier’s Three-Layer Filtration System, we have its specialized Corrugate Filter which is incredibly breathable and also extremely durable, as it is made with a mix of processed carbon and pulp to ultimately create a highly-functioning filtration layer of Impregnated Active Carbon.

As stated before, this Corrugate Filter is what’s used by the air purifier for deodorizing and disinfecting the air being filtered, as this final layer of high-functioning Impregnated Active Carbon allows the Aiwana Mam 2 Air Purifier to effectively cover up to 10,763.9 ft² (square ft. – or 1,000 ㎡) of area per gram and accurately capture any potential toxic gases and foul odors at the molecular level, ultimately offering you the cleanest air possible.

Last but not least, and as mentioned before, this high-end triple-layer filtered air purifier operates at a low-noise level, as it features a “Hurricane-Structured” Design that’s powered by high-end BLDC Motors, which are the same type of motors used in Samsung Electronics’ premium devices.

This helps the device to minimize the air resistance which consequently lower its operating noise levels when having the unit turned On, with the air purifier working just at a very whisper-quiet 25dB.

On top of that, this compact air purifier also features a super-economical low-power consumption, as using the Mam2 24/7 for an entire month would only have the device consuming around 2.2KW of electricity. 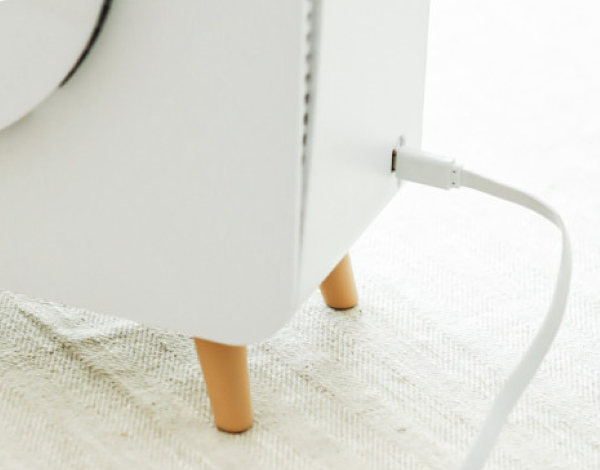 Since this air purifier doesn’t come equipped with an internal rechargeable battery, to have it work, all you have to do is to connect its included USB-C Power Cable to the device’s USB-C port (found at the bottom of the right-side of the unit), and then just plug the other end of its included USB-C Cable to any power source, whether that’s a simple charging port (via an AC Power Adapter), a PC, or even a power bank.

Note that a 10,000 mAh Power Bank can offer you around 48 hours of usage time when using this air purifier in its Sleep Mode (which we’ll discuss in greater detail just ahead).

Going from left to right, we only have one single button, which is a Quick-TOUCH Button (used to turn the air purifier On and Off, as well as to swap between its different operating Modes), followed by an AUTO LED LIght, then a TURBO LED LIght, a SLEEP LED LIght, and a Sensor LED LIght.

Speaking of which, it’s worth noting that this air purifier also comes equipped with a Micro Fine Dust Sensor, which basically allows the device to check the air condition in real-time, and then immediately inform users about those same levels of air-quality through its LED Lights.

By simply tapping the device’s TOUCH button once, the air purifier itself will immediately start running, and its AUTO MODE and SENSOR LED Lights will also quickly light up.

Thanks to this integration, users can very conveniently check the exact levels of the air-quality that they’re breathing indoors at any time they see fit.

The integration of this Circular Window basically lets users easily and quickly check on the unit’s filter’s contamination levels so that they’re able to always know when the air purifier’s filters need to be replaced.

Replacing the air purifier’s filters is a simple and fairly straightforward process. Embedded below, you can find the company’s Official Video Guide on how to do just that:

The Aiwana Mam 2 is a simple and stylish high-end air purifier that operates at a low-noise level and with a low power consumption, coming equipped with a triple-layer filter to effectively purify the air indoors.

Coming equipped with the latest air filtration technology, the Mam 2 can effectively filter out micro dust as small as 0.3μm. What’s even better about this air purifier is that its three high-end filters are also infused with natural green tea and other corrugate ingredients that ultimately give it a deodorizing and a disinfecting features, which both work together with its air purifying functionality.

All and all, this air purifier is designed to help you easily keep an eye on the levels of air-quality of the air you breathe indoors, all while being fairly easy to use and to maintain, as well as operating at a fairly low noise level while only consuming a low-level of power.

If you’re interested in getting it, all you have to do is to pledge a minimum of $89 to AIWANATECH’s Indiegogo Crowdfunding Campaign, which you can access by clicking the provided link.