With global warming now bringing an even stronger greenhouse effect due to the high CO2 emissions from many different devices, Earth has become warmer than ever before. And with that increase in warmth comes the unbearable hot weather that we’ve all become familiar with over the past few years. The main consequences are your typical sunburn(s) when not being careful enough during sunnier days as well as the sticky clothing that comes with sweating, which can be quite uncomfortable as you go about your day. Now, while there are many cooling devices for personal use available on the market, most of those aren’t really designed to be used all day long, and typically, they also require you to stop what you’re doing in order for you to use them. That said, for those looking for a more convenient portable cooling solution for personal use, have a look at the newly announced COOLY Fan.

The COOLY is a unique portable battery-powered wearable fan that can be clipped onto your belt or shirt, working by directly blowing air between a user’s clothing and their backs and featuring a quiet operation, 3 Fan Speeds and up to 6.5 hours of battery life.

The COOLY’s unique and innovative wearable design ultimately frees up a user’s hands, as the device is directly stabilized on their clothing thanks to its built-in Fixation Clip.

Now, let’s have a more detailed look at the COOLY Fan and check out exactly how this portable and wearable fan is designed to work.

Starting with the COOLY’s size, this wearable fan comes at an extremely compact size, as it features a slim and ultra-portable design, with the fan measuring just 3.03 inches long by 1.41 inches wide by 3.97 inches tall. In addition, this wearable fan only weighs 5.99oz, which makes it easy to carry around with you at all times.

In fact, thanks to its ultra-portable design you can even hold it in your hand and aim the COOLY’s gentle cooling airflow to whatever body part you feel overheating, whether that’s your neck, the back of your head, or even your hair / head.

Moving on to the fan’s different components. As said before, the COOLY is designed to be used as a wearable fan, and as such, it comes equipped with a built-in Fixation Clip that ultimately allows users to clip the fan onto their clothing, such as the bottom of a shirt or the waist of their pants, or alternatively, onto their belt. 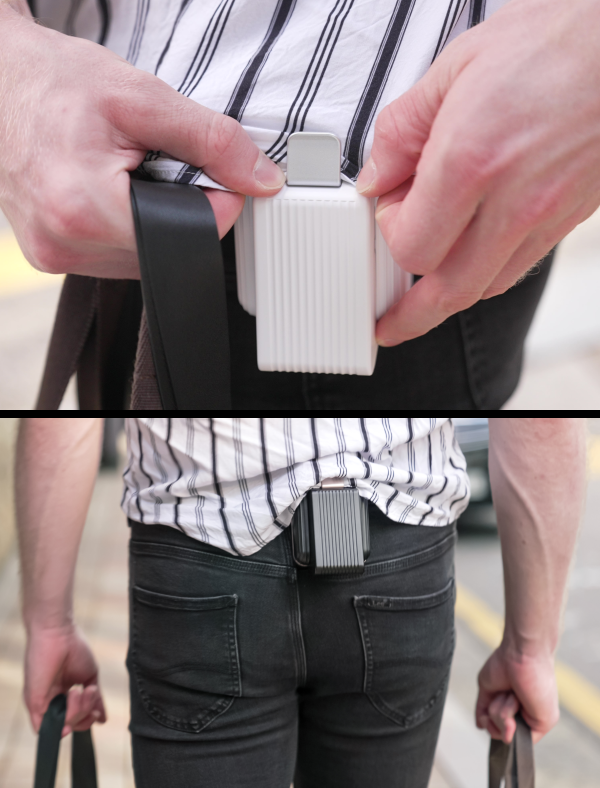 Thanks to that, users can conveniently have their hands free at all times, allowing them to stay focused on any task at they might have at hands will still having the COOLY blowing a nice gentle cooling airflow onto their backs.

Now, it’s important to note that the COOLY is designed to work based on its Cool-Down Technology, and this mechanism that’s responsible for making this wearable fan work was developed based on the water/heat evaporation mechanism that commonly occurs on our backs to take away the heat from our bodies when we’re feeling too hot.

That said, whenever a user clips the COOLY onto their clothing our belt, this wearable fan will then directly blow its gentle and cooling breeze onto a user’s back, which, as we all know, is our body’s largest surface area. Thanks to the COOLY’s innovative cooling method, users can quickly have their body temperature lowered so that they can feel more refreshed throughout their daily routine.

With that said, right at the front-side of the device, we have a set of Air Suction Vents which are used to have the fan inhaling air that then gets rotated around its powerful Internal Motor and alongside its internal walls.

The fan’s motor then creates a powerful rotational speed that’s used to directly blow out cool air from the fan’s Upper Exhaling Vents.

Last but not least, the COOLY also comes with a Wind Covers Attachment that can be attached to its Upper Exhaling Vents in order to prevent any disturbance on the fan’s cooling airflow when having your clothing over the fan’s Exhaling Vents.

As such, by equipping the fan with its Wind Covers Attachment, the unit will still be able to function at full capacity and accurately create a cooling airflow. Thanks to that, you can wear the Cooly in any sort of way, whether that’s under a thin T-shirt or a thicker sweatshirt.

Finally, to power its internal motor, this wearable fan also comes equipped with a 4,000mAh high-capacity battery that can power the device for up to 6.5 hours (when having the fan running at its lowest Fan Speed Setting) on a full-charge.

The COOLY is a unique portable battery-powered wearable fan that can be clipped onto your belt or shirt, working by directly blowing air between a user’s clothing and their backs and featuring a quiet operation, 3 Fan Speeds and up to 6.5 hours of battery life.

The COOLY’s unique and innovative wearable design ultimately frees up a user’s hands, as the device is directly stabilized on their clothing thanks to its built-in Fixation Clip.

All that makes this portable and wearable fan perfect for keeping yourself fresh during any upcoming hotter days, and most likely, better than most other cooling devices for personal use (if not all) that you can find available on the market.

Overall, this wearable fan is perfect for campers, fishers, hikers, or anyone else that enjoys participating in any sort of outdoor activities.

You can get the COOLY in one of two (x2) different color models: Black or White.

If you’re interested in getting one for yourself, all you have to do is to pledge a minimum of $43 to COOLY’s Kickstarter Crowdfunding Campaign, which you can access via the provided link.

The Solo Stove Yukon is a large portable fire pit that can fit logs up to 22" long, featuring a Double-Walled Design powered by a 360° Signature Airflow Technology which offers superior airflow and a prime secondary burn that respectively helps to eliminate smoke and create flames up to 4 ft. tall, along with an Ash Pan that catches loose ash to prevent clogging. Thanks to its clever Double-Walled Design and its innovative 360° Signature Airflow Technology, the Yukon is capable of quickly achieving an ultra-efficient burn that rapidly brings your kindling and chunkwood to brilliant flames in just a matter of minutes. All in all, this outdoors fire pit offers you some very convenient features that make it easy to use, fairly easy to clean, and great for keeping all of your friends and family nice and toasty while gathered around its roaring flames.
Read more
Outdoor

The Rumpl Original Puffy Blanket is a portable all-season outdoors puffy blanket that features a Synthetic Insulation made of 100% recycled plastic materials that's stuffed into an ultra-durable Ripstop Shell that's both water-resistant and stain-resistant. Not only that, but this sleek, cozy, and ultra-durable outdoors puffy blanket also comes equipped with Paracord Corner Loops for sticking it into the ground or to integrate it with a hammock as an underquilt, as well as with a sturdy Cape Clip that allows you to wear this blanket completely hands-free.
Read more
Miscellaneous Gadgets

The Magnahoodie is an all-in-one jacket, scarf and hat that uses a patent-pending magnetic closure system in place of traditional hoodie strings to securely close out the gaps around your face in order to keep your head, neck and ears perfectly protected and warm in any weather conditions. Not only that, but the Magnahoodie is built with a special Double-Hooded layer, which greatly helps to keep you extra cozy and warm on those super cold days. Thanks to its unique and ingenious design, you'll never again end up with a cold neck, nor will you ever again have to deal with having an obstructed peripheral vision or the annoying hoodie strings that come with wearing traditional hoodies. All in all, the Magnahoodie truly beats wearing traditional drawstring hoodies, not only to keep the cold, wind and rain out, but also for performing any outdoors activities (such as running, cycling, or even exploring the outdoors) as its patent-pending magnetic closure system ensures that its head-cover never obstructs your view.
Read more
Miscellaneous Gadgets

The KIZIK Shoes are hands-free modern sneakers for men and women that basically put themselves on thanks to their patented External Cage technology, which enables you to step on their retractable Springback Heel and slide your feet right into them. As such, unlike casual slip-on shoes, the KIZIK require no tying, no pulling, no heel crushing, and no use of your hands to put them on. In other words, you can easily put on the KIZIK Shoes without having to touch them at all, making these the easiest shoes to put on that you'll ever see. All in all, these hands-free step-on sneakers are extremely comfortable, super breathable, and also very stylish.
Read more