Whether you’ve just started your journey in the world of content creation or even if you’re already an established professional, chances are that you’ve probably found yourself wishing for better content editing solutions. Obviously, you have your typical keyboard and mouse combo, which sadly, is neither efficient nor intuitive enough for most digital content creators. On top of that, while there are many different digital editing software available for creating digital content, most software actually tend to be quite difficult to learn and get into, as they pack a ton of complex functionalities and operations that normally require a lot of time for you to learn how to use them. With all that said, for any digital content creators looking for a more reliable and easier to use content editing tool, have a look at the TourBox Elite.

The TourBox Elite is a high-end Bluetooth controller for content creators that’s meant to simplify the entire editing process, featuring many built-in functions such as configurable shortcuts and mouse operations.

All and all, the TourBox Elite Bluetooth Controller is designed to deliver an intuitive editing experience while also accelerating your workflow. It’s perfect for digital illustrators, designers, photographers, and both video and audio editors alike.

Now, without any further ado, let’s have a more detailed look at this dual-channel Bluetooth controller for editing digital content and talk more about how it works and also see everything that it can really do.

The Elite’s slim design ultimately allows you to have it with you at all times, whether that’s at home, at your work place or even while you’re on-the-go. Thanks to its compact size, you can easily pack it inside a backpack, bag, or purse when on-the-go.

Moreover, it also features a durable construction, as its outer shell is made of a high-quality ABS plastic.

The controller’s surface features a smooth UV Anti-fingerprint coating layer that keeps the controller smudge-free, while also giving it a very minimalist and ultra-modern look. (Note that this is only for the standard Black and White color models, while the Limited-Edition Smoke-Black model features a more translucent layer).

Moving on to the TourBox Elite’s components and functionalities. Starting with its built-in customizable buttons, we have a set of 14 buttons, which can ultimately be configured to have the controller support almost 100 straightforward actions, including single-click, double-click, press and hold, and many other functions / combinations.

Moreover, all keyboard and mouse shortcuts can also be mapped onto the TourBox Elite, as every button is configurable.

On that note, know that the Elite can be operated individually or alongside a mouse and a drawing tablet, which basically allows users to complement and streamline their daily workflow entirely.

Users can even tailor the Elite’s haptic touch intensity to their own personal needs in order to have a different level of force feedback for each different scenario.

Furthermore, users are also offered a Configurable Feedback Intensity for the rotary speed of these buttons and their force feedback intensity.

That said, via the controller’s dedicated software (called the TourBox Console – discussed further ahead), users can change the speed and sensitivity control for those three buttons (knob, dial, and scroll) by choosing from three (x3) different Speed Modes: Standard, Slow1 and Slow2, which have different speed values per button-rotation.

Additionally, the controller’s software also offers users two (x2) different variations of haptic feedback levels. There’s a more gentle Medium Level (VIB1) as well as a High Level (VIB2). You may calibrate the level of force through the haptic tool icon on the console to meet your exact needs.

Additionally, users can also disable this feature and stick with the default settings in order to have a less-noticeable haptic feel.

For generating all of this haptic feedback and sense of vibration, the TourBox Elite comes equipped with an internal Linear Vibration Wide-Band Motor that’s the first of its kind in the industry, which was designed specifically to more easily help to bring  a simulated touch that is both immersive and subtle at the same time.

The controller’s vibration motor is then combined with a Low Energy Consumption Processor, which is focused on providing users with a long-lasting battery life that can last them for up to 2-months.

Last but not least, all of the controller’s buttons are adapted to support up to four (x4) different switch encoders through its thoroughly envisioned 14-button layout in order to cater to all of your needs between different scenarios and frequency.

For the TourBox Elite’s connectivity, as said before, this device was designed to work as a dual-channel Bluetooth controller that can be used for editing any sort of digital content.

As such, it features a Dual-Channel Bluetooth (BLE) 5.1 Connection that allows you to pair it with up to 2 other devices at the same time (whether that’s a mouse, a drawing tablet, etc.) so that you can easily handle multiple projects on multiple devices simultaneously.

It’s also worth noting that the controller’s Dual-Channel Bluetooth 5.1 Connectivity can also bring many more possibilities in the future, such as richer OS compatibility, which the company is planning on having available on the TourBox Elite in the nearby future.

On top of that, it also features a USB-C Cable option for a secondary connection method that allows you to connect the TourBox Elite directly to your main device; such as a PC, for example.

Then, for its compatibility, know that the Elite can be used on pretty much any Operating System, whether that’s Windows (Windows 7 or higher) or macOS (macOS 10.10 or higher).

For the controller’s battery life, the company currently notes that the Elite already has a whooping 2 months of battery life, which is surely more than enough for any digital content creator to meet their editing needs with complete reliability.

Additionally, the company also vouches that it is looking to further optimize the controller’s battery life before reaching their final stage of mass production.

More impressively, whenever your TourBox Elite detects that its internal battery is running low on power, it’s dedicated software (the TourBox Console) will come up with a pop-up window that serves as an alert to notify you about the device’s current low-battery level, thus preventing you from having its battery dying out completely.

The controller’s Console Software even comes with a built-in feature that enables you to assign many different actions to the Elite, ultimately offering you absolute control and efficiency beyond the somewhat-outdated keyboard and mouse combinations that most digital content creators are familiar with (and most likely tired of).

Moreover, there’s also a special extension plugin called the TourMenu Plugin that gives you even more possibilities. To put it simply, this plugin provides users with a menu tool that works as an action interface, meaning similarly to the right-click mouse menu. Via this plugin, every button on the Elite controller can be assigned with its own custom TourMenu. 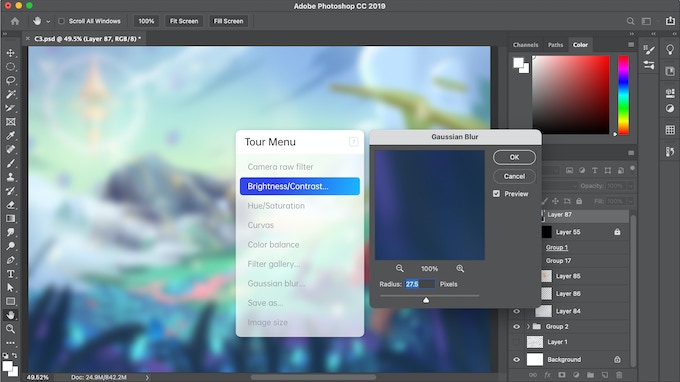 Basically, this TourMenu integration can be assigned with user-defined functions, such as toolbox for Photoshop, copy and paste, or open files.

Last but not least, the TourBox Console also allows users to manage multiple Presets that can be automatically switched from one another (via an Auto Switch function) to the corresponding preset that you’d need whenever the controller itself identifies the software that you’re about to use.

For that, you can either use the official templates that already come pre-configured onto the controller, or alternatively, import new ones that are regularly shared by the community, or even create your own and share it with other members from the TourBox Community.

THE DIFFERENT USE CASE SCENARIOS

Finally, for those wondering exactly what you could use this Bluetooth editing controller for editing digital content, know that the TourBox Elite can be implemented into any sort of digital workflow. This includes digital painting, graphic design, photo and video editing, color grading, music production, and just about any other scenario that involves the manipulation of digital content.

Moreover, the TourBox Elite is such a versatile controller that you could even use it for most of your daily office work.

For illustration purposes, the Elite would provide you with instant access to functions like canvas rotation, zoom in and out, and brush control, all to keep you focused and in your creative flow. You could also adjust size, hardness, weight, and opacity, all with a simple turn of its knob.

Lastly, the controller would also let you select any desired brush tool as well as zoom in and out with its versatile scroll, while holding and pressing the buttons would let you drag images across the screen. And more importantly, its D-pad could be used to to seamlessly switch between key shortcuts and tools.

Then, for Photo-Editing and retouching pictures, the Elite allows photographers to glance through their photo stocks, as well as select and rate them with ease.

In this scenario, the elite would be capable of completely replacing the use of a standard computer mouse so that you could ultimately go mouse-free, allowing you to swiftly work on adjusting exposure, contrast, shadows and highlights with a simple turn of its knob, which you could do in editing apps like Lightroom, Camera Raw and Capture One.

The Elite would also make it possible for photographers to adjust an entire image or isolate specific parts or objects in frame (including lens correction, layer masking ) in real time, and all without the use of a keyboard and mouse. In addition, users would also be able to remove objects, retouch, and recolor their images as they were creating a picture with an intuitive brush control.

Then, for Video-Edition purposes, the Elite is great for any everyday video-editing tasks. Those could be the selection of video clips, cutting or trimming, rapidly scrolling through video timelines, frame-by-frame control, inserting special effects, or even adding audio tracks to the timeline. The controller’s built-in acceleration algorithm would also let you manipulate a video-timeline based on your preferred pace, so either at a fast or slow speed.

Last but not least, this awesome controller would also make it possible for users to adjust the picture quality on their videos, while also allowing them to easily calibrate different color parameters precisely via the knob, dial and scroll for ultimately matching color and exposure.

And as a last example, the Elite’s integrated D-pad buttons would allow any passionate graphic designer or 3D Render expert to accurately and quickly switching between multiple sets of tools, for which all of their corresponding functions could be easily checked in real time via the HUD.

The TourBox Elite is a high-end Bluetooth controller for content creators that’s meant to simplify the entire editing process, featuring many built-in functions such as configurable shortcuts and mouse operations.

All and all, the TourBox Elite Bluetooth Controller is designed to deliver an intuitive editing experience while also accelerating your workflow. It’s perfect for digital illustrators, designers, photographers, and both video and audio editors alike.

The TourBox Elite is currently available in 3 different color models: Classic Black, Ivory White, and Smoke-Back Translucent, which is a Limited-Time Edition).

If you’re interested in getting it, all you have to do is to pledge a minimum of $178 or more to Tourbox’s Kickstarter Crowdfunding Campaign. For a little extra, you can also get your controller coming with a sleek and ultra-durable Storage Case.