There are two main metabolic processes that our body goes through in order to create the energy that’s used for our main daily activities, such as working on our day jobs or even working out. For producing that energy, our body can utilize different types of fuel. The first one is glucose (A.K.A. blood sugar), which is the main sugar found in your blood that comes from the foods you eat or drink that have carbohydrates, which are basically broken down into glucose that our body then uses as a main source of energy. Alternatively, when glucose levels are low, meaning when our body is running low on muscle glycogen (the carbs stored in muscle tissue that would be used as fuel for prolonged moderate-to-high-intensity exercises), our body utilizes ketones (which are produced in the liver) as an alternative fuel source, which are basically used to breakdown fats and convert those into fuel. Now, while our body only has the ability to produce ketones endogenously (inside the body), activating your body’s ketone production through diet or exercise tends to take a lot of time, as well as patience and effort, as it usually involves fasting or following a strict keto diet (meaning a very low carb and high fat diet). Alas, nowadays, people have the option to consume exogenous ketones (created outside the body), which are still those same ketones, but rather in the form of a nutritional drink / exogenous supplement. To put it simply, consuming exogenous ketones regularly can not only increase your body’s energy production to keep you going throughout the day, but ultimately, it can also help your body to get into ketosis (our body’s metabolic process of ketone production). This brings us to the HVMN Ketone-IQ.

All in all, the Ketone-IQ was formulated to help those focused on living healthy to have an easier and more consistent metabolically healthy lifestyle.

After 2 long years of hard work, the genius minds at H.V.M.N. have now developed the next-generation of their proprietary drinkable ketone, which is simply named Ketone-IQ. 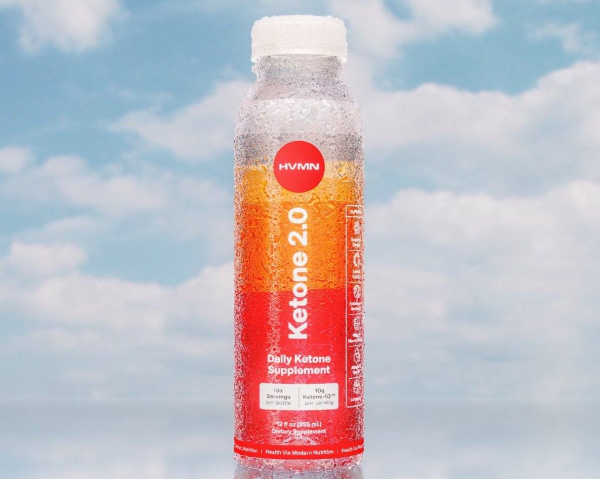 Those objectives are a better taste, a lower and more affordable price (with the Ketone-IQ being 66% cheaper than H.V.M.N.’s “Ketone Ester” inaugural exogenous ketone drink), and a longer duration of elevated levels of ketones for your body for a maximum of six hours. It’s worth noting that those six hours of ketones-based energy are a major improvement from the previous three to four hours of elevated levels of ketones offered by the previous drinkable ketone formula from the company’s “Ketone Ester”.

WHO IS IT FOR?

Basically, this drinkable exogenous ketone supplement was formulated for two phases of life. The first one being for those living metabolically healthy lifestyles by adhering to exercise and a diet regimen, for which Ketone-IQ can help to compound those lifestyle benefits.

Secondly, this drinkable exogenous ketone supplement is also great for those not living up to their metabolic health potential, as Ketone-IQ can ultimately help them to tap into the amazing health benefits of ketones and get back on track.

For the ingredients used to formulate this drinkable exogenous ketone supplement, the base ingredients include: Water, under 2% of Monk Fruit Extract, a Natural Flavor compound, Rebaudioside M, Citric Acid, Potassium Sorbate, and Potassium Benzoate. 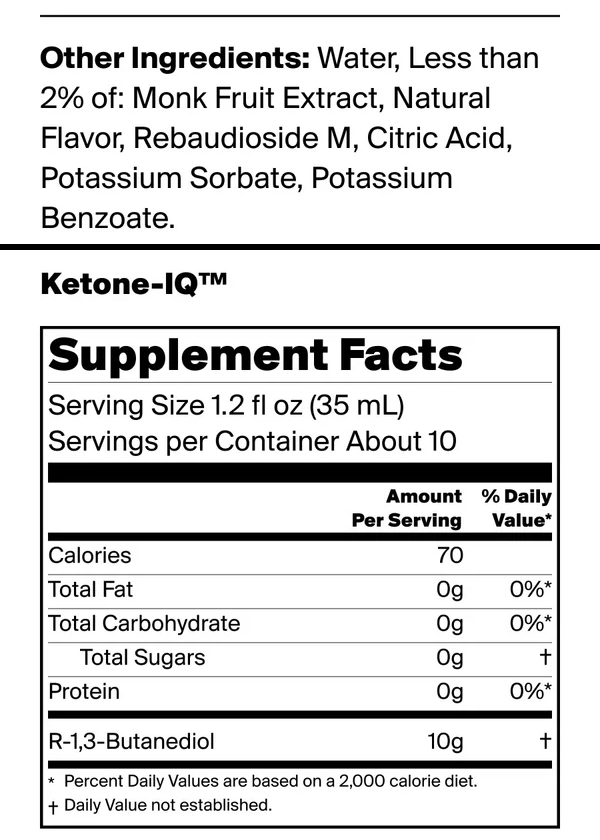 It’s also worth noting that this drinkable exogenous ketone supplement contains absolutely no caffeine and no sugar whatsoever, meaning that when consumed, you won’t experience any sugar crash or insulin spike.

With that said, the HVMN Ketone-IQ was formulated to ultimately get you a completely clean and natural energy source to power your brain and body alike.

Note that since each serving contains 10g of ketones, you’re recommended to consume between 1 to 3 servings a day. 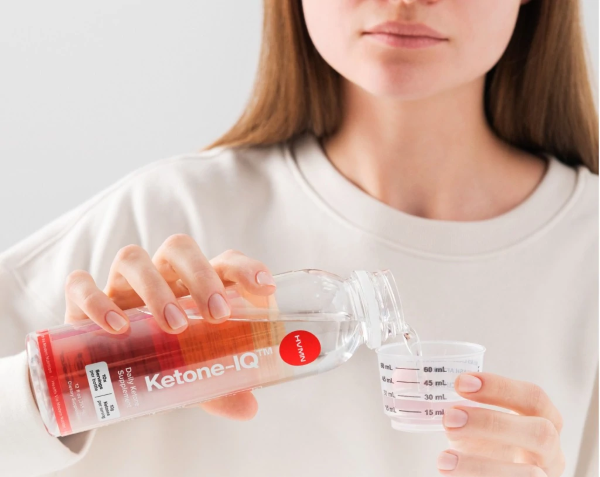 Best of all, the Ketone-IQ is also rated to be effective and safe for all purposes, whether you’re a professional athlete or a hard-working business employee looking for an extra source of energy, as it is certified to be both FDA GRAS and compliant with the World Anti-Doping Agency.

Each bottle is formulated to give you 10 servings per bottle, and a measuring cup also comes included to make it easy and convenient for you to measure each and every serving on a daily basis.

The main benefit offered by ketones is that, unlike fats, ketones can cross the blood-brain barrier, thus allowing them to fuel both the brain and the body for a better overall performance on a daily basis, both for work that requires mental focus as well as for exercising / working out.

In fact, ketones are often described as “The Fourth Macronutrient,” as they’re a source of fuel outside of the traditional macronutrient categories: fat, carbohydrates, and protein.

To be a little more specific, when ketone levels are elevated, one has the potential to experience myriad health benefits, including but not limited to, better sustained energy levels, a boosted endurance, better recovery post-workout, an improvement in metabolic health, enhanced mental clarity, as well as better weight management and appetite control, and ultimately, even longevity.

When it comes to better sustained energy levels, past studies have shown that ketones provide the most benefits when blood ketone levels reach 1 to 2.5 millimolar (mmol). 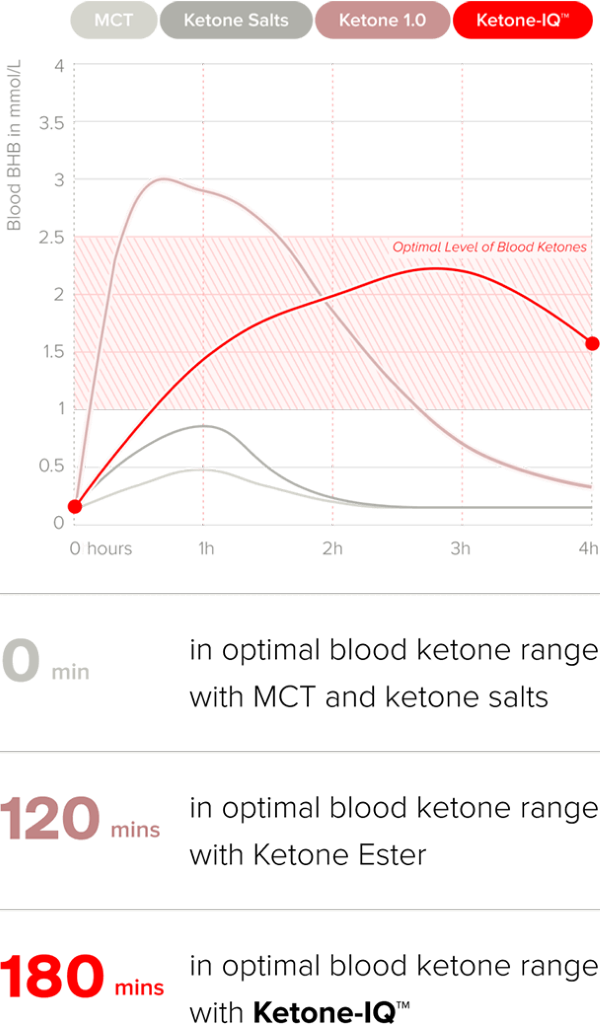 As such, the Ketone-IQ is formulated to elevate each user’s blood ketones to this optimal range for up to 3 hours, which is longer than any other drinkable ketone available.

In addition, the Ketone-IQ is also formulated to raise your ketone levels to a range that may unlock key benefits for endurance and recovery.

As an example, a 2016 study conducted by the University of Oxford suggested that elevated ketone levels contributed to increased endurance performance in athletes Another study also showed evidence that drinking an exogenous ketone supplement post-exercise can bring an enhanced recovery by improving your body’s ability to synthesize muscle glycogen.

For optimal endurance and recovery results, the company suggests you to take the Ketone-IQ along your choice of carbohydrate and protein recovery drink.

The Ketone-IQ can also help support your overall metabolic health. As a recent study from 2021 suggests, drinking exogenous ketone supplements before meals for approximately 14 days may improve your body’s glucose control, reduce cellular inflammation, and even enhance vascular function.

Basically, a better glucose control can ultimately help you to prevent chronic metabolic diseases, like type 2 diabetes, which are among the leading causes of death for Americans.

As a reference, a recent study led by the University of North Carolina at Chapel Hill revealed that only 12% of Americans are metabolically healthy.

Since ketones are able to cross the blood-brain barrier and can act as fuel for the brain, drinking Ketone-IQ can ultimately help you achieve and sustain peak mental acuity, as this drinkable exogenous ketone supplement was formulated to quickly elevate your blood ketone levels.

In a study led by the National Academy of Sciences of the United States of America, ketones were shown to improve brain network stability by 87%, which can help increase brain activity as well as sharpen mental clarity.

Another great thing about the Ketone-IQ is that this caffeine-free and sugar-free drinkable exogenous ketone supplement can also be used to support weight loss goals by using it in combination with a ketogenic diet, in combination with exercise, and/or in parallel with fasting.

More noticeably, a research from 2017 has shown that ketones can significantly reduce ghrelin, the hunger hormone. Obviously, a reduced appetite makes it easier for people to maintain a calorie deficit and achieve and manage a healthy weight, and a better and healthier lifestyle overall.

Best of all, increasing your body’s ketones level can also help you to achieve longevity.

That’s simply because, when paired with a healthy diet and exercise, the consumption of exogenous ketone supplements can prevent serious illnesses like type 2 diabetes or cardiovascular disease.

As such, consuming the Ketone-IQ regularly can also help you to support longevity, as this drinkable exogenous ketone supplement was formulated to promote a strong metabolic and cognitive health.

All in all, the Ketone-IQ was formulated to help those focused on living healthy to have an easier and more consistent metabolically healthy lifestyle.

In addition, the company also offers a Monthly Subscription for your preferred packaging-size, which will get you a neat 10% off your package purchases.

You can order yours online from HVMN’s official shopping page, where you can check out all the available purchase options.

Embedded below you can also find HVMN’s official launch video for their Ketone-IQ drinkable ketone supplement:

Establishing the HIPAA compliance checklist will assure individuals of the total security of their medical details due to the measures that have been put in place. In addition, where there is a breach, they have a voice that will be heard, and adequate steps will be taken to compensate them.
Read more
Health News

The Hand Over Heart products are all-natural and non-toxic body-care and home-care products that are made with babies' health and safety in mind. Made with absolutely no harmful byproducts at all, all products from the Hand Over Heart store are carefully formulated to help families more easily nourish, nurture and protect their children, their homes, and themselves, ultimately allowing parents and their babies to live a purer and better life overall.
Read more
Health News

The Dimension Robotics DR. CaRo is a high-tech robotic arm system designed specifically to restore mobility and/or to strengthen atrophied muscles to stroke victims, all without requiring any sort of prohibitively expensive physical therapy sessions. The device consists of a motorized handle-equipped robotic arm that's directly attached to a 23-inch display, for which the system is meant to aid in rebuilding neural connections to a patient’s limbs with entertaining mobility-training exercises. It's also worth noting that the DR. CaRo can switch between Passive, Assistive and Impedance/Resistive Modes to accommodate patients looking to regain strength and dexterity in their limbs.
Read more

Vizio Teams Up with Hulu