If you’re someone who enjoys relaxing outside your home, then an outdoors fire pit is probably one of the best gadgets you can get. A fire pit not only adds a beautiful focal point when set up in your backyard, patio, or front-porch, but also sets the tone for your outdoor living space, ultimately making for an awesome gathering spot to hangout with friends and family. Besides, sitting around a fire pit outdoors isn’t just about having a nice warm place where you can socialize with your loved ones. On top of its many practical uses, such as providing for a cozy campfire or garden barbecue, an outdoors fire pit also offers you several emotional and health benefits too, as it can greatly help you to relax and unwind after a hard day / week at work. For example, when the sun goes down, there’s nothing more relaxing than watching the flames dancing, other than “maybe” roasting marshmallows at the fire. Lastly, in addition to making for an outstanding gathering space outside your home, an outdoors fire pit can also make your experience at any tailgating party much more enjoyable. This brings us to the Solo Stove Yukon.

The Solo Stove Yukon is a large portable fire pit that can fit logs up to 22″ long, featuring a Double-Walled Design powered by a 360° Signature Airflow Technology which offers superior airflow and a prime secondary burn that respectively helps to eliminate smoke and create flames up to 4 ft. tall, along with an Ash Pan that catches loose ash to prevent clogging.

Thanks to its clever Double-Walled Design and its innovative 360° Signature Airflow Technology, the Yukon is capable of quickly achieving an ultra-efficient burn that rapidly brings your kindling and chunkwood to brilliant flames in just a matter of minutes.

Now, let’s have a more detailed look at the Solo Stove Yukon and check out everything that this outdoors fire pit has to offer you.

Starting with its size, the Solo Stove Yukon comes at a fairly large size, measuring exactly 27 inches in diameter by 17 inches tall (68.5 x 43 cm). It’s worth noting that this is the brand’s largest model, for which its name (“Yukon”) represents this fire pit’s size-model.

On that note, know that if you’d prefer, you can instead opt for a medium-sized fire pit called the “Bonfire” (measures 19.5″ in diameter by 14″ tall), or ultimately, for a small-sized fire pit called the “Ranger” (measures 15″ in diameter by just 12.5″ tall), which makes the latter perfect for outdoors exploration such as camping trips or a day at the beach.

Now, despite its bulky size, the Solo Stove Yukon is still fairly portable, as the fire pit weighs no more than 38 lbs. (17.2 kg) when completely empty. While the Yukon isn’t super-heavy, it also isn’t that lightweight either, meaning that you can be assured that the fire pit with stay put at all times, so you’ll never have any reasons to worry about its stability.

It’s also worth noting that the Yukon’s large dimensions basically give this vast outdoors fire pit an extra-large capacity for burning wood, with it being capable of fitting between 6 to 8 logs measuring up to 22″ long (but it can also take shorter logs, if you prefer).

Moreover, when it comes to its design, the Yukon features a minimalist and modern design that ultimately makes it an elegant focal point when set up outside your home, whether that’s in your backyard, patio, or front-porch.

Additionally, it’s large dimensions also make it a great gathering space for multiple people, with the Yukon ultimately being capable of comfortably accommodating between 6 to 12 people around its large smokeless flames.

Built directly onto its Stainless Steel construction, you’ll also notice that the Solo Stove Yukon features a Double-Walled Design that’s powered by a 360° Signature Airflow Technology, which essentially optimizes your experience with its fiery flames.

To be a little more specific, the combination of its Double-Walled Design with its 360° Airflow Technology causes rising hot air to be pulled through the fire pit’s bottom vent holes, for which that hot air is then sent to all parts of the pit’s wood-burning chamber, and then finally leaving through its chamber’s upper vent holes.

This essentially causes hot air to quickly and effectively fan out through the Yukon’s double-walled airflow system, thus creating an ultra-hot flame that greatly reduces smoke while also effortlessly incinerating any 22″ logs (or shorter) that your throw into its wood-burning chamber down to a fine ash. This also makes the Yukon fairly easy to clean.

In sum, the Yukon’s Double-Walled Design and its 360° Airflow Technology ultimately offers this fire pit a superior airflow that not only helps to eliminate smoke (meaning you’ll have way less smoke when compared to other brands of fire pits), but consequently also ensures a prime secondary burn that allows the fire pit’s wood-burning chamber to create flames that can get 400° hotter than conventional fires, and go as high as 4 ft. tall. 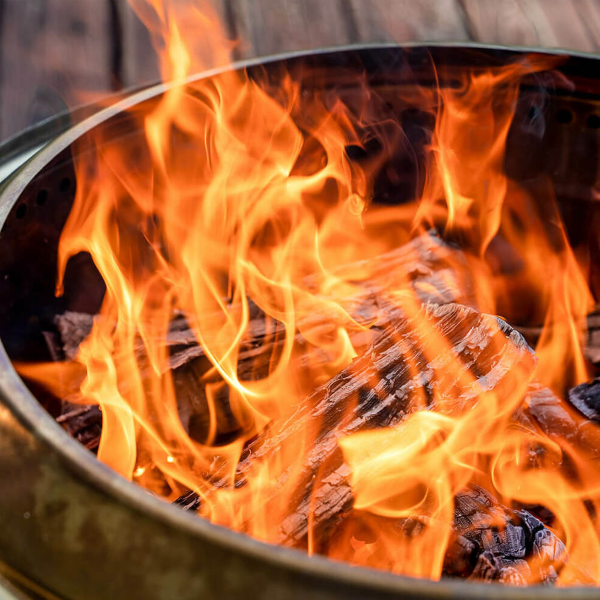 Best of all, the Yukon’s Double-Walled Design and its innovative 360° Airflow Technology also make this fire pit capable of quickly achieving an ultra-efficient burn that rapidly brings your kindling and chunkwood to brilliant flames in just a matter of minutes, thus making starting up a fire with the Solo Stove Yukon both a fast and easy process.

That said, I’m glad to say that the Yukon not only is super easy to light, but also very reliable when it comes to keeping its fire going.

On a side note, keep in mind that while the Yukon works great in pretty much any backyard, ranch, or anywhere else where your group plans to gather, you should always be sure to only fire up the Yukon within a well vented area with no overhang.

We’d also like to point out that while the Yukon was isn’t specifically designed for cooking – as its main goal is to be used as an outdoors fire pit – you can still break out some mashmallows, some hot dogs on a stick, or even some slices of fruit, and have them cooking / roasting slowly over the Yukon’s tall and fiery flames.

Last but not least, integrated at the bottom side of the fire pit, there’s also a Removable Ash Pan that catches any loose ash in order to prevent the fire pit’s innovative airflow system from clogging, all while simultaneously working as a heat shield to reduce the heat transfer to the ground beneath the fire pit.

The Solo Stove Yukon is a large portable fire pit that can fit logs up to 22″ long, featuring a Double-Walled Design powered by a 360° Signature Airflow Technology which offers superior airflow and a prime secondary burn that respectively helps to eliminate smoke and create flames up to 4 ft. tall, along with an Ash Pan that catches loose ash to prevent clogging.

Thanks to its clever Double-Walled Design and its innovative 360° Signature Airflow Technology, the Yukon is capable of quickly achieving an ultra-efficient burn that rapidly brings your kindling and chunkwood to brilliant flames in just a matter of minutes.

All in all, this outdoors fire pit offers you some very convenient features that make it easy to use, fairly easy to clean, and great for keeping all of your friends and family nice and toasty while gathered around its roaring flames.

If you’re interested in buying this awesome outdoors fire pit, know that each unit is currently discounted from its normal price of $749.99, and is now going for just $429.99 (saves you a whopping $320), and each purchase is also accompanied by a Lifetime Warranty, along with a Free 30-Day Return Period and Free Shipping within the U.S.

You can order yours online right now, directly from Solo Stove’s official shopping page, which you can access by clicking here.