If you’re into content creation, then you probably know that having a decent microphone is crucial to ensure that your voice is recorded with a high-quality audio whenever you’re recording or streaming your content. That goes for gamers, live streamers, YouTubers, and also for people that enjoy recording podcasts. While a headset microphone does allow you to record your voice, most headphones don’t really come equipped with high-end microphones, meaning that their integrated microphone might not be able to record your voice at a high-quality audio output, and it might also end up capturing your keyboard strokes and other background noises. Moreover, the microphones that come built into headsets also don’t offer you the many sound adjustment functions that USB microphones do. In comparison to headset microphones, USB microphones not only offer you a better output sound performance, but they also feature a wide variety of sound adjustment controls such as a volume gain dial as well as the option to choose from multiple sound profiles with different pickup patterns. So, if you’re in the market for a USB microphone, consider going with the HyperX Quadcast S.

The HyperX Quadcast S is a USB condenser gaming microphone powered by 3 electret condenser capsules that features a great audio-recording quality with a 96kHz Sample Rate at a 16-bit Bit Depth, along with 4 Pickup Polar Patterns to choose from, a large Gain Control dial to regulate input sensitivity, plus a Tap-to-Mute Sensor with LED indicator, RGB Lighting that can be customized via the HyperX NGENUITY Software, and compatibility with PC, PS4, PS5, and MacOS.

Not only does this USB condenser gaming microphone sounds great, but it also looks great. With it, you can add both style and flair to any stream setup or podcasting setup, all while ensuring that the audio output of your voice is recorded at the best possible sound-quality.

Now, let’s have a more detailed look at the HyperX Quadcast S and check out everything that this USB condenser gaming microphone has to offer you.

Starting with the microphone’s size, the HyperX Quadcast S comes at a reasonably compact size, with the device measuring just 4.04 inches long by 5.1 inches wide by 9.8 inches tall. This USB condenser microphone is also quite lightweight (by itself – meaning when detached from its dedicated desk-stand), as it only weighs 0.56 lbs.

Regarding its design, this USB condenser gaming microphone also features a stylish and modern design that allows to look great together with any computer or console setup.

Additionally, this USB microphone also features a very sturdy construction, and even comes equipped with a built-in anti-vibration shock mount that helps to eliminate noises that could be generated by any potential bump or hit when sitting at your desk, plus an internal pop filter that’s responsible for muffling and blocking any plosive sounds from hitting the microphone.

Furthermore, it also supports boom arm mounting, as it also comes with an included mount adapter that fits 3/8” and 5/8” thread sizes, which allows users to set it up with most standard microphone boom arms.

Last but not least, this USB condenser gaming microphone also integrates a built-in RGB Lighting with two (x2) separate Light Zones that can display a total of 16,777,216 colors, for which its light-colors and light-effects can all be fully-customize according to each user’s personal preferences via the microphone’s dedicated Desktop App (called the HyperX NGENUITY Software – discussed at the end of the article).

Moving on to the microphone’s audio specifications and its overall voice-recording audio quality. Since this is a USB condenser microphone, the HyperX Quadcast S is powered by a set of three (x3) electret condenser capsules, which work together to ensure a great audio-recording quality. 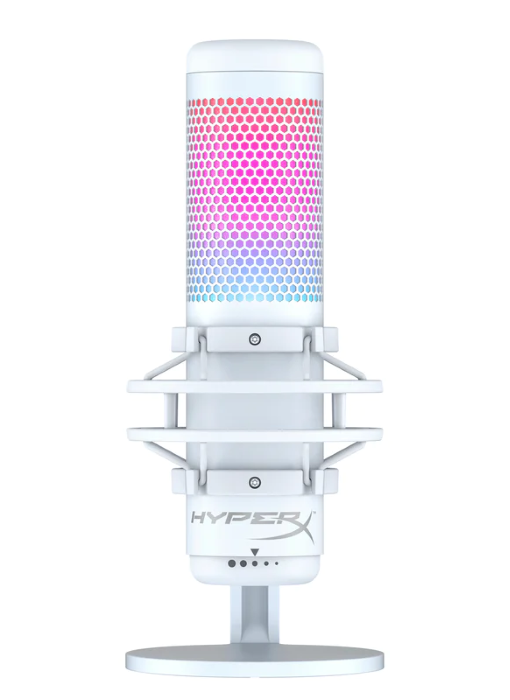 To be a little more specific, know that this USB condenser gaming microphone is capable of recording voice-audio with a Sample Rate resolution of 96kHz at a 16-bit Bit Depth.

Furthermore, the microphone also features a Frequency Response that varies between 20Hz – 20kHz, a Sound Sensitivity of -36dB (1V/Pa at 1kHz), and a Rated RMS (Root Mean Square) of ≤-95dBFS.

It’s also worth noting that the HyperX QuadCast S is also certified by both Discord and TeamSpeak, so you can be assured that this USB condenser gaming microphone is capable of broadcasting loud and clear, no matter what Voice App you’re looking to use with it. 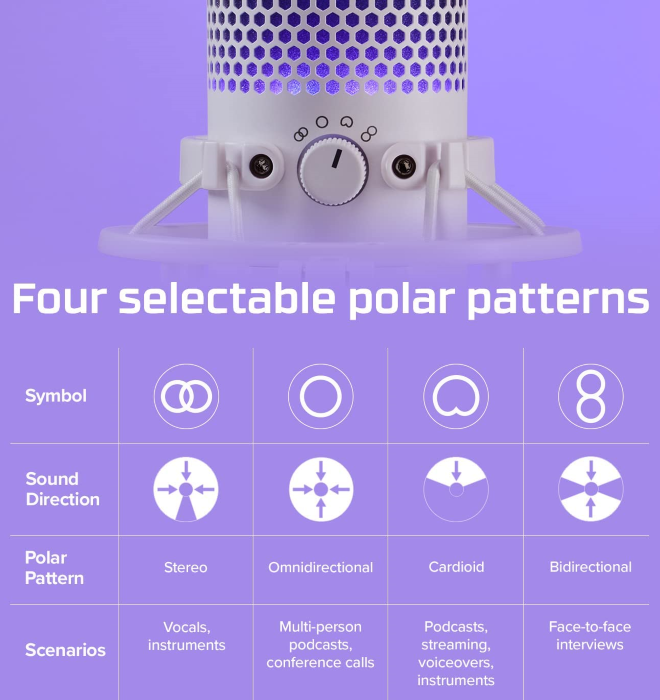 In addition, the microphone also comes equipped with a large built-in Gain Control dial (located at the bottom-side of the microphone) that can be used to easily regulate its input sensitivity.

Lastly, it’s also worth mentioning that the microphone also integrates a built-in 3.5mm headphone output port (located at its back-side) that can either be used to monitor the mic’s audio-recording in real time, or ultimately, to listen the audio that’s being played on your main device (i.e. PC / laptop audio or Console audio). 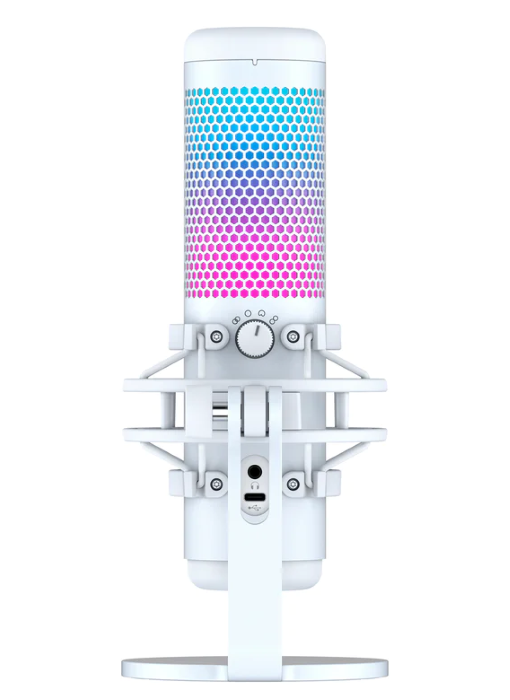 The microphone’s built-in 3.5mm headphone output port features a maximum Power Output of 7mW, a Frequency Response that varies between 20Hz – 20kHz, and a SNR (Signal-to-noise ratio) of 90dB (at 1kHZ).

On top of its multiple audio-recording functions, the HyperX Quadcast S also features a simple interface that makes it easy and intuitive for users to operate the microphone’s different functionalities.

Starting at its front-side, as said before, the microphone comes equipped with a large built-in Gain Control dial that’s located directly at the bottom-side of the device. 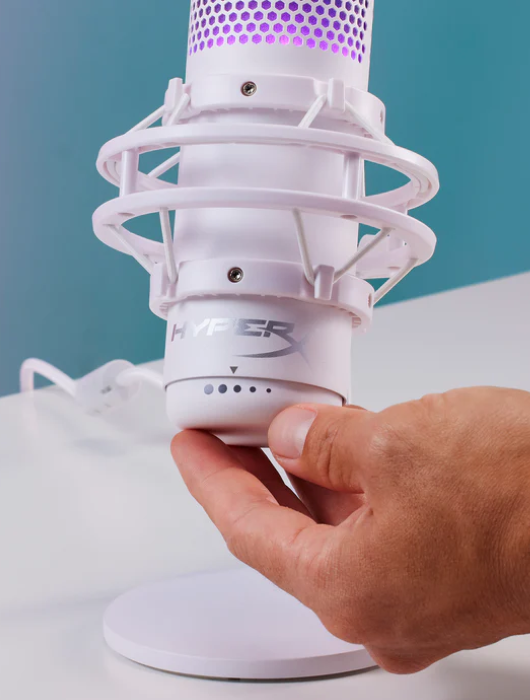 Then, at to the microphone’s back-side, we have its 4 Pickup Pattern Selection Wheel, and sitting below it, we have its built-in 3.5mm headphone output port and its dedicated USB-C Connection port (used for powering the microphone by connecting its USB-C to USB-A Connection Cable to a PC, laptop, or console). 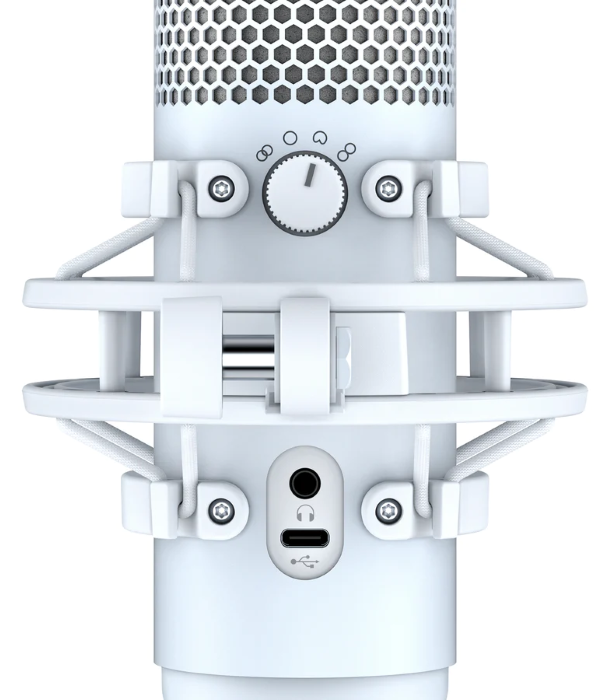 Finally, integrated at the top face of the microphone, there’s also a Tap-to-Mute Sensor with LED indicator, which works as a Quick Touch Button that conveniently allows you to Mute and Unmute the microphone’s audio-recording. 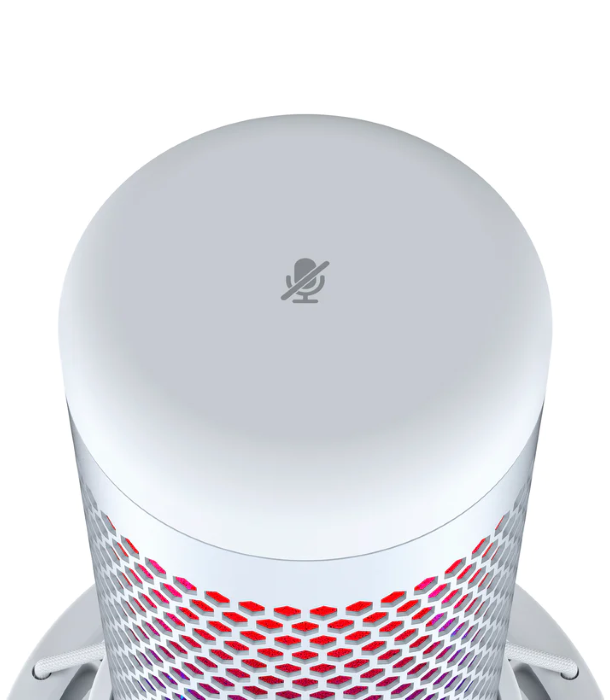 Note that when using its Tap-to-Mute Sensor, the microphone’s built-in RGB Lighting will work as its Microphone Mute/Unmute LED indicator, which will instantly let know about the microphone’s current status.

Since this is a USB microphone, it obviously features USB Connectivity, more specifically, USB 2.0 Connectivity (full-speed), but the microhpone also supports USB 1.1 and USB 3.0 Connection Ports.

When connected to a USB port, the microphone features a Power Consumption of 245mA / 5V. When powered for the first time, the microphone’s built-in RGB Lighting will light up with a White Light color.

Best of all, the microphone is also rated to be multi-platform compatible, meaning that it works with Discord, TeamSpeak, Streamlabs OBS, OBS Studio, and XSplit, as well as with any other Voice platform that you might use.

Last of all, and as said earlier, the microphone works together with HyperX’s NGENUITY Software, which allows users to easily customize the color for the microphone’s RGB lighting as well as customize different dynamic effects for its 2 separate Light Zones, all according to their personal taste.

Inside their package, users will find: their HyperX Quadcast S USB Condenser Gaming Microphone, along with its dedicated Stand, its USB-C to USB-A Connection Cable, as well as the microphone’s included mount adapter, and also its Quick Start Guide.

The HyperX Quadcast S is a USB condenser gaming microphone powered by 3 electret condenser capsules that features a great audio-recording quality with a 96kHz Sample Rate at a 16-bit Bit Depth, along with 4 Pickup Polar Patterns to choose from, a large Gain Control dial to regulate input sensitivity, plus a Tap-to-Mute Sensor with LED indicator, RGB Lighting that can be customized via the HyperX NGENUITY Software, and compatibility with PC, PS4, PS5, and MacOS.

All in all, this USB condenser gaming microphone is a great choice to go with if you’re someone that’s into any type content creation, no matter if you’re a passionate gamer, a live streamer, a YouTubers, or someone that regularly records podcasts and/or interviews.

If you’re interested in buying it, know that this USB microphone is currently discounted from its standard price of $159.99, and is now going for just $129.99 (saves you $30). You can order yours online right now, either directly from HyperX’s official shopping page, or alternatively, you can instead get it from Amazon, if you’d prefer.