Brain training (or mental training) can be an essential part of maintaining a healthy mental state, as performing it on a regular basis can greatly help to improve cognitive functions like memory recall, problem solving, concentration, and attention to detail. Essentially, brain training activities work in a similar but ultimately better way than working out does. While performing physical exercise regularly can offer the body cardiovascular and muscle-building benefits, as well as multiple mental health benefits (as it also involves constant thinking, processing, and learning of new physical skills), a brain training activity doesn’t always have to be exercise-related. In fact, research has found that creative outlets like painting and other art forms such learning an instrument, doing expressive writing, or even learning a new language can also help to improve one’s cognitive functions. Alternatively, you can also engage in brain training games, which use fun and intense mental workout sessions to target and strengthen different cognitive functions. Ultimately, brain training games can bring you many different mental health benefits such as helping to improve your memory, (which consequently can also help to reduce the risk for Dementia or Alzheimer’s), as well as improve your problem solving and critical thinking skills, your attention span, and your overall reaction time. This is where the FocusCalm Headset comes in, as this unique and innovative wearable device can greatly improve the way you train your brain for having better focus and a calmer mind.

The FocusCalm Headset is a wearable EEG brain training device that can be used for stress reduction and concentration improvement, as it utilizes EEG technology to detect and analyze your brain’s activity, which is then translated to a neurofeedback score that’s displayed on its Smartphone App in order to help you train and strengthen your brain’s ability to get into a state of relaxation and also to strengthen different brain functions such as memory, attention span and decision-making, all through a variety of engaging activities, while also providing you with real-time measurements of your current stress level on a scale from 0 to 100.

By utilizing a simple three-step process that consists of a learn, practice, and challenge phases, this wearable EEG brain training device seamlessly creates an easy way to achieve mental clarity and reduced stress.

Now, let’s have a more detailed look at the FocusCalm Headset, where we’ll be checking out its design, discuss exactly how this wearable EEG brain training device is designed to work, and talk a little more about how you can use it together with its Smartphone App to train your brain.

Not only is this wearable brain training device designed to be portable, but it is also made with its users’ comfort in mind, as it features an ergonomic design that ensures it’s comfortable to wear for everyone and at all times, no matter a user’s head-size or head-shape, nor what type of activity you’re engaged on while wearing it.

Thanks to its ultra-comfortable fit, you can wear it at any time, including when you’re at home, while you’re at work, or even while working out / practicing sports.

Moving on to the device’s components. Integrated at the back of the device’s inner-side, there’s a set of three (x3) built-in EEG plates/chips that connect to the back-side of a user’s head. 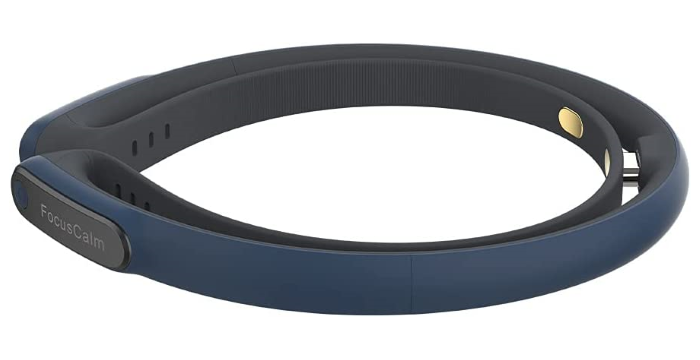 Then, at the front of the device’s inner-side, there are two more separate sets of three (x3) built-in EEG chips that connect to the left- and right-side temples of a user’s head. 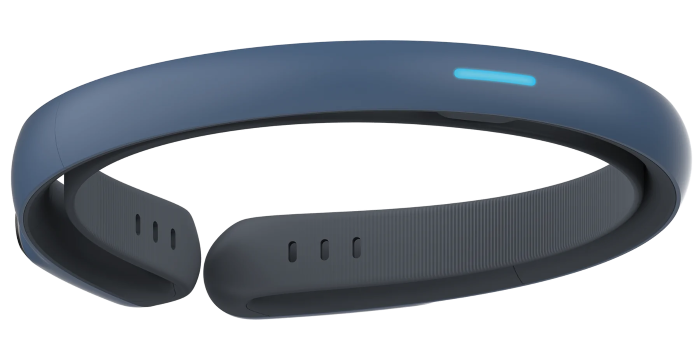 All of these built-in EEG chips are responsible for the device’s brain-activity tracking capabilities, as they’re all powered by a state-of-the-art EEG technology that ultimately makes the FocusCalm Headset capable of detecting and analyzing a user’s brain’s activity, and then translate it to a neurofeedback score that’s displayed on its Smartphone App.

For controlling the device’s different functionalities, the FocusCalm Headset also integrates a set of built-in Controls, which are all integrated directly onto the device itself.

Integrated at the front-left side of the device, there’s built-in Power On/Off Button, while at its front-right side, there’s a built-in rubberized protective cover for its Micro-USB Charging port. 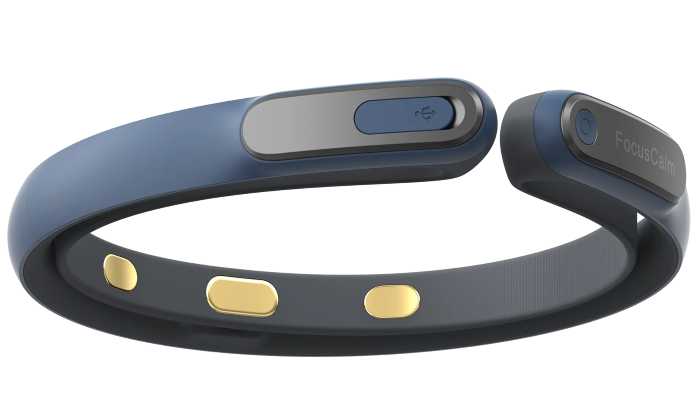 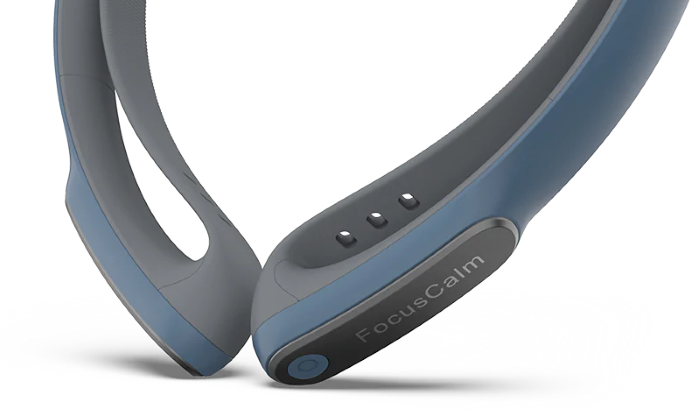 For establishing a wireless connectivity with its Smartphone App (discussed in more detail further ahead), the FocusCalm Headset utilizes Bluetooth Connectivity, working in a maximum wireless range of approximately 32 ft. (10 m).

For its power-source, this wearable EEG brain training device utilizes a built-in high-capacity Lithium-Ion battery that can offer the device a long-lasting battery life of around 10 hours of runtime, which equates to an approximate daily use of 20 minutes for a full-month (31 days). 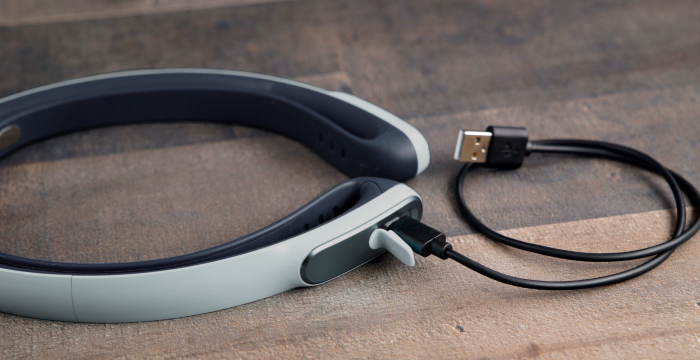 As said before, the FocusCalm Headset works together with its dedicated smartphone companion App, called the FocusCalm, which is available to download for free for both iOS and Android devices.

The FocusCalm tracks the progress of a user’s brain activity in three dimensions: intensity, continuity and speed. After detected and analyzed, that brain activity is then translated to a neurofeedback score (represents a real-time measurement of a user’s current brain-stress level on a scale from 0 to 100), which is displayed in the form of a large number via the App’s Brainwave Tracker to informs users about how well their brain is performing.

This is done by having the user take part in a variety of engaging brain-training activities, which are used to help each user train and strengthen their brain’s ability to get into a state of relaxation and also to strengthen different brain functions such as memory, attention span and decision-making.

Those brain-training activities include calm games and focus games, along with guided meditations and other targeted daily programs, which all include high-quality content from wellness experts.

The app also keeps track of how many minutes each user spends in a relaxed state of mind.

Last but not least, the FocusCalm App also provides users with a monthly Wellness Calendar that allows them to see how their personal neurofeedback score has been progressing over each month.

Inside their package, users will find: their FocusCalm Headset device, along with a sleek Carrying Pouch, the device’s included USB to Micro-USB Charging Cable, and also a User Manual.

The FocusCalm Headset is a wearable EEG brain training device that can be used for stress reduction and concentration improvement, as it utilizes EEG technology to detect and analyze your brain’s activity, which is then translated to a neurofeedback score that’s displayed on its Smartphone App in order to help you train and strengthen your brain’s ability to get into a state of relaxation and also to strengthen different brain functions such as memory, attention span and decision-making, all through a variety of engaging activities, while also providing you with real-time measurements of your current stress level on a scale from 0 to 100.

By wearing it just a few minutes a day, you can learn how to control your thinking, ultimately allowing you to have much better focus and a calmer mind throughout the day, which can lead to higher productivity, faster decision-making and better results in sport and work.

If you’re interested in getting it, know that each unit goes for just $199.99. You can order yours online right now, either directly from FocusCalm’s official shopping page, or alternatively, you can get it from Amazon, if you’d prefer.

João Matos
Soon after getting his Bachelor's degree in Computer Engineering, João Matos joined the GadgetGram team on May 2019. Since then, he has been working as the Content Director, with the main goal of publishing thorough reviews on all sorts of newly released tech-products. In addition, João has also been been working as a proficient News Writer and News Editor at Gadget Gram, as well as the Social Media Manager for the company's Facebook, Twitter and LinkedIn pages.
Previous articlePenetration Testing services: What are they?
Next articleHow to choose the best slot machine?

When it comes to your personal dental care, it's important that you brush your teeth on a daily basis (at least after each major...
Read more
Health Gadgets

The Vioguard Cubby Plus is a powerful UV-C Disinfecting Chamber equipped with a UV-C bacteria-blasting light that can deliver the precise amount of UV-C light required to destroy infectious agents. Overall, this powerful UV-C Sanitizing Gadget is very reliable, and does a great job at sanitizing just about any small everyday items with its 4 powerful UV-C Light Bulbs, which can completely cover any item's surface from all directions and ultimately kill up to 99.9% of germs, bacteria and viruses at the molecular level. Best of all, since both of its Disinfection Cycles only take you either 60 or 90 seconds of your time, that also makes this UV-C Sanitizing Gadget is very quick and very easy to use.
Read more
Health Gadgets

The Sharper Image PowerBoost Pro+ is a portable state-of-the-art percussion massager powered by a whisper-quiet Brushless Anti-Stall Motor that comes with 6 interchangeable attachment heads which are specifically designed to target different body areas, including a unique specialized Dual-Temperature Hot and Cold massage head capable of reaching temperatures as low as 38ºF and as high as 115ºF, all while also featuring a built-in LED Display, built-in Temperature Controls, 6 Massage Speed Settings, and up to 5 hours of battery life. Designed for post-workout recovery and relaxation and targeted pain relief, this innovative percussion massager can be used for immediate post-workout relaxation and overall pain relief, to help alleviate muscle soreness and tight knots, and also to reduce lactic acid buildup.
Read more
Health Gadgets

The GTX GPS SmartSole is a pair of wearable 4G-enabled water-resistant smart shoe inserts designed specifically for people living with mental disorders that can cause them to wander and get lost which work as a high-performance GPS tracking system that's used together with its GTX Smart Locator App, from which where users can create geozones and circular perimeters around any addresses, ultimately providing families and caregivers with a reliable way of keeping track of their relatives / assigned patients, working across all 50 USA States and Territories in areas of cellular coverage. By using these wearable 4G-enabled water-resistant smart shoe inserts, you can better protect people living with mental disorders from wandering, as well as keep better track of them if that situation ever occurs. Thanks to the App's accurate alerts you'll be able to prevent those people from going far and ultimately getting lost.
Read more

KODAK ESP 7250 Allows you to Print from your Mobile Phone