Personal Television is a little blurry for now 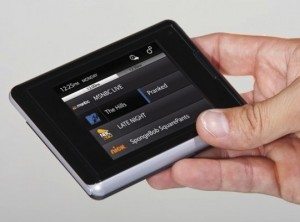 In a world that’s short on all sorts of resources from oil and gas to water, recently we’ve been asked to cut down our use yet more. Last week, Ralph de la Vega said heavy users of music over data on the AT&T wireless network were bandwidth hogs, that 3% of smartphone users were using 40% of his capacity and frankly, we need to all cut back just a bit. Spectrum is among the few things that they’re not making any more of and, with more users than ever, it’s going to be hard to come up with the capacity needed to keep everyone happy. One solution to this is to shift some of the capacity off of current networks and come up with new broadcast models for content distribution. The folks at FloTV have done just that. The service has been around for a bit, mostly on handsets from AT&T that carry support for the service. In a reverse trend the FloTV folks have gone from the phone to creating a dedicated device for the service.

Launched relatively low key last month, the small device built by HTC has a 3.5″ touch screen that works indoors and out and gets a variety of programming including Fox News, CNBC, MSNBC, Disney, Nick, ESPN, MTV, and Comedy Central along with some specials and the like. The device comes with six months of free services, after that it’s $15 a month (which you can lower with a multi-service contract). As with most over the air content, your personal TV won’t work in fringe coverage areas, underground or in many buildings and of course, it’s probably not going to work or allowed to be used on planes.

While I do believe there’s a market for standalone devices such as dedicated media players and digital cameras, this one just doesn’t feel like it’s going to be a mass market success. For one thing, it’s hard to see how this fits in with the consumer “rule of three” for mobile devices. Second, it’s got a tough business model attached to it. Consumers have historically gone in one of two directions with devices. Give me the device for free and I’ll pay you a monthly fee for content (such as your set top box) or sell me the device and I own it but I’m not going to pay for service fees on top of the device (other than what I pay to purchase content I own). Models that fall in the middle, with relatively high costs of devices and significant service fees just don’t do very well. It’s hard to see how the model here for Personal Television resonates with consumers in terms of driving mass market adoption.

I don’t think the concept is all wrong, just too limited in scope at the moment. If I were FloTV with the investment I’d made in broadcast technology, I’d want to get this service on to as many screens as possible. Sure, phones are a obvious fit but a dedicated device like this could be a success; but it’s going to need a lot of work. First, there’s got to be more content to watch, the current line up isn’t enough. It also needs DVR features to time shift, pause and skip. Think TiVo in my pocket. Finally, there’s got to be some better pricing. I already pay quite a bit to watch CNBC at home on multiple screens, and with a Slingbox I can even take that content to my PC and phone directly, with no additional costs. Give me a pricing model that fits in line with what I’m already paying and you won’t need to make the television personal, you’ll make it tailored perfectly to me and that’s what it’s going to take to make this idea work.