The iPhone 4 is the first portable consumer device to feature full nine degree-of-freedom (9-DoF) inertial sensing. Apple has accomplished this by integrating a three-axis accelerometer and a three-axis gyroscope from STMicroelectronics (ST), together with an electronic compass from AKM.  The iPhone product line has moved steadily towards this goal with each successive model. Steve Nasiri and his Invensense colleagues discussed the benefits of 9-DoF sensing in some detail in a recent Whitepaper. 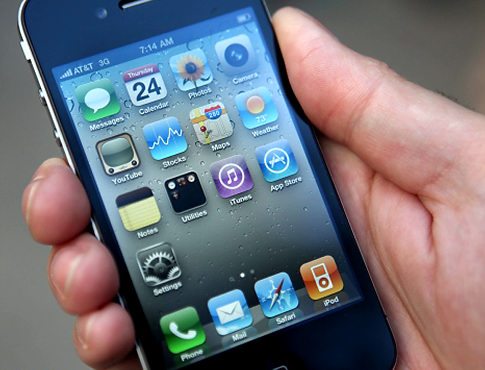 The original 2G iPhone, released in 2007, featured an ST 3 mm x 5 mm LIS302DL three-axis accelerometer. This provided the screen orientation function, by using the acceleration of gravity to determine the orientation, and it was also available to “app” developers for simple games. The iPhone 3G also only contained an accelerometer, but in this case Apple used the 3 mm x 3mm LIS331DL MEMS device, also from ST. Next up, the iPhone 3GS added digital compass capability by adding an AKM AK8973 electronic compass.  This provided improved GPS location functionality, even though (as described on an AKM web site) it required regular recalibration by waving the phone in a figure-eight motion  – no, it’s not a tai-chi app!

The iPhone 4 features an ST LIS331DLH three-axis accelerometer and an AKM AK8975 three-axis electronic compass. To get the 9-DoF, Apple added an ST L3G4200D three-axis gyroscope sensor, packaged in a 4 mm x 4 mm LGA package. Chipworks has examined all of the inertial sensors found in the iPhone product family and detailed reverse engineering analysis reports are now available. The following is a summary of the company’s findings for the sensors found in the iPhone 4.

According to ST the LIS331DLH is an ultra-low power, digital three-axis accelerometer. The package contains two stacked die, a V583A ASIC with 2007 die marks and a MEMS die with C5L12B 2008 die marks. Figure 1 shows the MEMS die, with its hermetic cap removed, illustrating the integrated XY sensor structure and a Z-axis sensor structure.

The XY sensor uses interdigitated finger capacitors to sense the motion of a proof mass that is constrained to move in the XY plane, while the Z sensor uses an underlying capacitor plate to sense vertical deflection of a proof mass mounted on a torsion spring. ST fabricated the part using their well-established THELMA process (Thick Epi-Poly Layer for Micro-actuators and Accelerometers). The THELMA process uses a thick top polysilicon layer (poly 2) to form the micro-machined electro-mechanical structures plus a thin buried polysilicon layer (poly 1) for connection to the bond pads, as well as for the bottom capacitor plate of the Z-sensor.

The L3G4200D is also fabricated using essentially the same manufacturing process as is used for the LIS331DLH. The L3G4200D package contains a V654A ASIC, with 2009 die markings, stacked above a capped, integrated MEMS gyroscope die, which has GK10A 2009 die markings.  The L3G4200D is essentially a tuning fork vibrational gyroscope, where vibrational energy imparted to one degree-of-freedom of the mechanical structure is transferred to an orthogonal degree-of-freedom by rotation around an axis perpendicular to both the drive and sense modes of the device. Integrating three rotation sense axis into a single device represents a significant engineering achievement by ST.

Banks of interdigitated drive capacitors, located on the left and right hand sides of the die, induce vibration of the tuning fork proof mass structures (see Figure 3). Rotation around the X and Y axis in the plane of the die (pitch and roll) cause an out-of-plane deflection of the proof mass. The poly 1 capacitor plates (beneath the proof mass, in Fig. 4) sense the deflections. Rotation around the Z axis (yaw) gives in an in-plane deflection, sensed by interdigitated capacitor plates located along the top and bottom edge of the die.

Hall devices are sensitive only to the component of the magnetic field vector perpendicular to the surface of the die. The AKM electronic compass products thus incorporate a magnetic concentrator that serves to bend magnetic field lines parallel to the die surface, to obtain a component perpendicular to the surface. Figure 6 presents a plan-view X-ray of the 2 mm x 2mm AK8975, indicating the location of the magnetic concentrator.

Cross-sectional analysis of the packaged AK8975 shows that the magnetic concentrator, formed using a FeNi alloy, is mounted beneath the die (Fig. 7). The location of the Hall Sensor device and the solenoid coil are indicated on the micrograph.

The integration of 9-DoF sensing into the iPhone 4 will, with certainty, enable new applications. The inclusion of the gyroscope raises the accuracy of motion sensing, for example for gesture recognition, while the incorporation of the compass improves navigation functionality.

The iPhone 4 has many other sensors, which incidentally is perhaps why it is so popular. The specifications on the Apple web site disclose the digital compass, gyroscope and accelerometer, discussed above, plus an LED-based proximity sensor and an LCD-based ambient light sensor that control the power to the screen, and multiple microphone sensors. Chipworks found three MEMS microphones, a Knowles and an Infineon inside the iPhone 4, plus another Knowles microphone in the ear bud wires. The dominant sensor on the iPhone is, of course, the touch screen. This sophisticated sensor uses an Apple-branded 343S0499 Texas Instruments touch screen controller.

A question of interest is what new sensors will Apple include next? Possibilities might include a pressure sensor for barometric pressure and altitude measurements, although in this case the benefits to the user might be marginal.

It may be the case that Apple has exhausted the ranged of sensors that would provide significant benefit to the users. The iPhone 4 provides functionality that corresponds to three of the five the human senses including vision, hearing and touch. Is it likely that we would want our iPhone to be able to taste and smell?

Chipworks is the recognized leader in reverse engineering and patent infringement analysis of semiconductors and electronic systems. The company’s ability to analyze the circuitry and physical composition of these systems makes it a key partner in the success of the world’s largest semiconductor and microelectronics companies. Intellectual property groups and their legal counsel trust Chipworks for success in patent licensing and litigation – earning hundreds of millions of dollars in patent licenses, and saving as much in royalty payments. Research & Development and Product Management rely on Chipworks for success in new product design and launch, saving hundreds of millions of dollars in design, and earning even more through superior product design and faster launches.