The forthcoming release of Rock Band, Rock Band 3, will sport a game controller that’s also a genuine Fender Squier Strat. Of course, as well as introducing a whole new level of gameplay, you’ll also have the benefit of learning to play an actual instrument.  Rather than just tapping along to onscreen prompts, the Squier by Fender Stratocaster Guitar and Controller will allow players to get closer to the realism of playing. Not only is it an officially licensed Rock Band 3 video game controller, but it also happens to be a fully functional electric guitar. Designed to work in the game’s Pro mode, the device allows players to play the actual notes and chords of their favorite songs while racking up high gameplay scores. 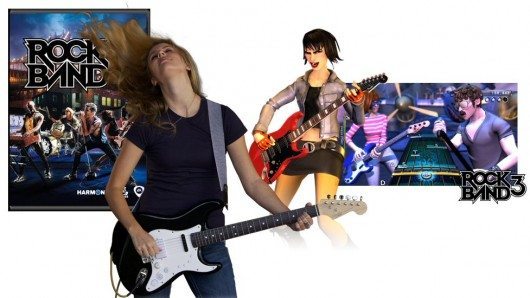 A game sensor is hidden at each of the guitar’s 22 frets on the fingerboard, which allows direct on-screen feedback indicating the player’s finger position when using the instrument as a Rock Band 3 controller and in the game’s guitar-training tutorials. Although tuning up isn’t necessary for gameplay, it’s a good habit to get into if you intend to use the guitar out of the game – and if you buy this guitar, then that’s probably the intention. 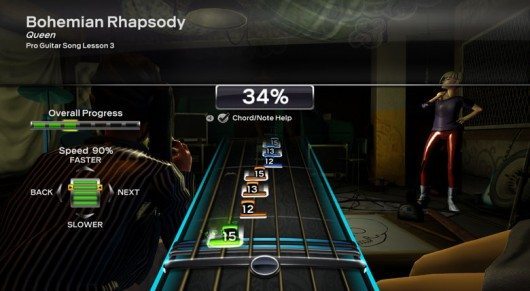 The instrument needs to be connected to the Nintendo Wii, Microsoft Xbox 360 or Sony PlayStation 3 via a Mad Catz MIDI PRO adapter (which needs to be purchased separately). The 5-pin MIDI interface in the guitar can also be used with hardware such as computers, where users will be able to use sequencers and recording software such as Ableton Live Lite 8.

The Squier Strat controller has an agathis wood body with polyester finish, maple neck with polymer fingerboard, enclosed tuners, a custom bridge pickup and hard-tail bridge. In addition to the MIDI port, the guitar also sports a 0.25-inch output jack for onward connection to a real amplifier using a standard guitar cable (please refer to the earlier note about tuning).

The Squier Stratocaster Guitar and Controller will be available from March 2011 for a suggested retail price of US$279. Pre-order begins on New Year’s Day.

The BioLite FirePit is a high-quality portable outdoors smokeless wood-fed fire pit that can provide you with the warmth, smell, crackle, and feel of a wood campfire, without any smoke whatsoever. This portable fire pit can be used to either warm yourself nicely during colder days or to cook hibachi-style meals on it by using its Removeable Grill Grate. Furthermore, thanks to its 10,400 mAh battery powerpack you're ensured to never run out of battery on your Smartphone, or, whenever you're not using it to recharge your devices, to power up the fire pit's flame. Overall, this unit features a very sleek and compact design, which makes it great to take it with you literally anywhere. It's an awesome fire pit to have both at home as well as to take with you on your camping truck.
Read more

For any tennis enthusiast out there, just like playing the sport, watching live tennis matches on services like ESPN or ESPN+ can also be quite fun. That's mainly because whether you're still on the court swinging your Tennis Racquet or you've already retired to the stands, regardless of your tennis skill levels, anyone that's truly passionate about tennis will show a tremendous love for the sport that will most likely last them an entire lifetime. However, while watching live tennis matches where your favorite tennis players dominate the court can be quite thrilling, you can still amp up the game another notch by having some money on the line. That's exactly why tennis betting is back on track, as that is where the real rush and excitement is at. This article offers the three best tips for anyone that's looking to get into Tennis Betting.
Read more

Sony Ericsson Equinox is a stylish and interactive wonder, equipped with enhanced design features and built-in GPS. With eye-catching night effects, you can give...
Read more
Cell Phones

Google updates Android Market -Google recently announced that an update to the Android Market has started rolling out to devices.  Google stated that the new...
Read more
Miscellaneous Gadgets

Onlive has announced a system that brings its cloud-based, instant-play titles direct to the television. Instead of sitting in front of a console and...
Read more