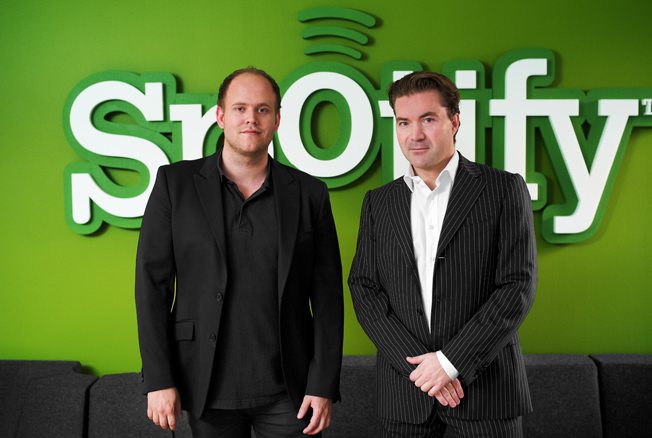 In the latest gadget news, Spotify, a free streaming music service, has made a huge dent in the marketshare of online music.  Companies like Apple and Google are doing their best to put together music products that compete directly with Spotify’s Web-based music streaming product. Record labels are making the process as difficult as possible for these giants, but Spotify is upping the anne.  The company just launched a new music download service where you can now purchase and download full playlists comprised of any songs from the company’s 9 million-track catalog for as low as £0.50 per song.

What’s even more important is the fact that Spotify’s new gadget feature allows playlists to be synchronized with the iPod classic, iPod nano or iPod shuffle right from within the Spotify desktop app. Can you say Spotify to iTunes?  Spotify still isn’t available in the U.S., but it is being suggested that Spotify is closer than ever to striking deals with record companies that will allow it to launch its popular service stateside.

Spotify says hello to the iPod

At Spotify it’s always been our mission to provide you with the best all-round music experience on the planet. For Spotify Premium subscribers, a huge part of that experience is taking your playlists with you wherever you go. However, for the rest of our users, listening to their favourite playlists on the move hasn’t been possible.

You’ve been telling us how much you love discovering, sharing and talking about music in Spotify – and you’ve created well over 200 million playlists to prove it. But you’ve also said you’re listening to a huge amount of music on your iPods, and that getting your Spotify playlists onto them as MP3s has been a serious hassle, forcing you to juggle multiple music players. That’s until now…

As of today, Spotify is making it possible for everyone to take their playlists with them in one lean, green music machine.

Manage your iPod in Spotify! For the first time, seamlessly manage any iPod classic, iPod nano and iPod shuffle in Spotify. Simply connect your iPod to your computer via your USB cable and watch it magically appear in the new ‘Devices’ section of your Spotify sidebar.
Sync all the MP3s contained in your Spotify playlists to your iPod, and purchase the rest through…

The all-new Spotify download service! Listening to the music you want to hear, wherever you want it, just got a whole lot simpler – and cheaper.
Your playlists are special to you. You’ve spent untold hours putting together your own mix-tape masterpieces on your computer and want to take them with you, but without the trouble of having to buy each track separately, switching music players or breaking the bank? Then look no further.

Spotify’s new MP3 download service makes it possible to own your playlists in one easy step. By introducing a range of MP3 bundles, we’ve been able to offer you some of the most competitive prices available – from as little as 60 cents per song.

Spotify Mobile app now available to all! iPod integration was your biggest request, but there are also a lot of Spotify Free users out there who are iPhone and Android phone owners. You asked for the ability to buy your MP3 playlists and sync to your phones. So we’ve got you covered too…

As of today, everyone can download the Spotify Mobile iPhone & Android apps to wirelessly sync your MP3 playlists in Spotify from your computer to your phone. Fire up your mobile app and see your phone appear in the ‘Devices’ section of the Spotify sidebar, ready to rock and roll. No cables required! And did we mention it’s now possible to wirelessly sync these playlists to your iPod touch?

Now everyone can own their favourite Spotify playlists to take wherever they want. Heading out for a run or off on a trip? Buying the songs you want to hear has never been quicker, easier or more affordable.

All new features will begin being rolled out to all users from today as part of an automatic update. Be sure to give us a spin!

Daniel Ek, CEO & Founder of Spotify, says: “From today, Spotify really is the only music player you’ll ever need. Our users don’t want to have to switch between music players, but they do want to take their playlists with them wherever they go, on a wider range of devices, more simply and at a price they can afford. Now we’ve made that possible on one of the world’s most popular consumer devices.”

Gustav Söderström, Chief Product Officer at Spotify, adds: “Accessing music on your mobile phone is the future, but today that makes up a pretty small percentage of music fans. We want to open up the Spotify experience to as many people as possible, and in a way where they can get exactly the music they want at a great price. Check it out – we really hope you like it.”

Where to Sell Your Products in 2014 and Beyond (InfoGraphic)