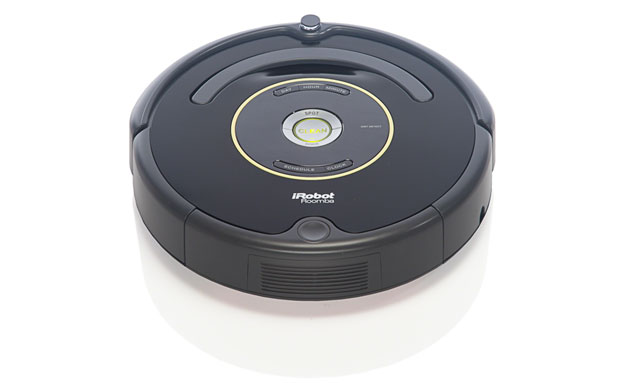 iRobot just announced the third-generation model, the Looj 330, which has been completely re-tooled to add a four-stage auger, multiple speed settings, an automated “Clean” mode and a lithium-ion battery. It’s also a bit more compact this time around, increasing the likelihood it’ll fit your gutter.

Additionally, iRobot is adding some entry-level models to its Roomba lineup: the 620, 630 and 650. Though these cost about half the price of the flagship offerings, they actually feature many of the same technologies, including iAdapt, the sensor arrangement that allows Roomba to crisscross the floor like it does. Here, though, the cosmetic design is different, and you also won’t find bells and whistles like capacitive touchscreens or fine Hepa filters.  Also, the 600 family only use acoustic sensors to detect debris, whereas the pricier models add optical sensors to pick up on lighter particles, like fuzz.

Looj 330 takes a dangerous job and does it for you, using a high-velocity, four-stage auger to blast away leaves, dirt and clogs while brushing gutters clean. The new entry-level Roomba 600 Series robots, which complement the top-of-the-line 700 Series robots, offer the most up-to-date cleaning system and incorporate optimized airflow and an improved brush design for more thorough and effective cleaning. Roomba 600 Series will replace the Roomba 500 Series in iRobot’s dry floor care line-up in most regions worldwide.

“iRobot has sold more than 8 million home robots worldwide, by focusing on cleaning performance and innovation across the company’s portfolio of home robots,” said Jeff Beck, chief operating officer of iRobot Corporation. “Regardless of whether our robots are washing or vacuuming floors, cleaning gutters or the pool, our global customers want high quality products with state-of-the-art technology that perform a single task exceptionally well. The Looj 330 and Roomba 600 Series are the result of combining innovative research and customer feedback in our development process.”

The releases of the Looj 330 and Roomba 600 Series robots underscore the growing global acceptance of and demand for practical robots, particularly for performing automated home maintenance tasks.

The iRobot Looj 330: Cleans gutters on its own at the press of a button.
Enhanced cleaning performance. Smarter operational features. Looj blasts away leaves, dirt and clogs while brushing gutters clean. Featuring a high-velocity, four-stage auger, Looj travels down your gutter on its own, sensing and adapting to debris to provide the most effective cleaning.

What’s new:
– A four-stage auger spins at 500 RPM to blast away leaves, dirt and clogs.
– In CLEAN mode, Looj automatically senses and adapts to debris, providing the most
effective cleaning.
– A 7.2V Lithium-ion battery provides superior performance for a longer time.
– Multiple speeds let you spend more time clearing away tough clogs.
– A scraper boosts cleaning performance and clears a path for the robot.
– A lower profile design enables Looj to fit in more gutters.
– An increased communications range – up to 50-feet – between the robot and remote control handle allows Looj to clean longer stretches of gutter without having to move the ladder.
– Interchangeable auger flaps allow for greater performance.
– Cleans up to a 30-foot section of gutter in 5 minutes on average.
– Cleans 200 linear feet per battery charge on average.

Additional Looj 330 features:
– Detachable carrying handle doubles as the wireless remote control.
– Travels under gutter straps and over downspout holes.
– Easy to clean with a hose.
– Waterproof in up to 8 inches of water.
– Prevents overreaching and repeated trips up and down the ladder.

What’s new:
– AeroVac Technology optimizes airflow so the bin fills evenly and needs to be emptied less often.
– The improved brush design and optimized airflow remove more hair from the robot’s brushes, providing more thorough cleaning and reduced maintenance.
– The 600 Series has new styling with a splash of color. Additional Roomba 600 Series features:
– Onboard scheduling allows you to preset up to seven times per week for Roomba to clean when it’s most convenient for you. (Model 650 and higher.)
– Using iAdapt® Responsive Cleaning Technology, iRobot’s advanced proprietary system of software and sensors, Roomba vacuums every section of your floor multiple times for a comprehensive cleaning.
– With Dirt DetectTM, Roomba uses an acoustic sensor to help find dirtier areas and spends more time cleaning them.
– Roomba automatically docks and recharges on its Home Base® when it finishes vacuuming or when the battery is running low.
– A Virtual Wall® barrier can be used to create an invisible barrier that Roomba won’t cross, keeping the robot in the rooms you want to clean and out of the ones you don’t.

The iRobot Looj 330 gutter cleaning robot is available in North America at www.irobot.com for $299.

The Monster Smart Home Digital Photo Frame is a smart picture frame that features a 10-inch high-definition 1280p touchscreen, 16GB of storage space for storing up to 4,000 photos, Wi-Fi Connectivity, In-App controls, and Voice Assistant Support for both Amazon Alexa and the Google Assistant. Unlike smart digital photo frames from other brands that might require quite a bit of time for users to upload photos to their internal storage, this smart picture frame can have up to 100 photos uploaded at once to its 16GB memory via its Smartphone Companion App, which can save you a lot of time. Best of all, the Monster Smart Home Digital Photo Frame also comes with an additional 6GB of free cloud storage.
Read more
Home Gadgets

The Solo Stove Yukon is a large portable fire pit that can fit logs up to 22" long, featuring a Double-Walled Design powered by a 360° Signature Airflow Technology which offers superior airflow and a prime secondary burn that respectively helps to eliminate smoke and create flames up to 4 ft. tall, along with an Ash Pan that catches loose ash to prevent clogging. Thanks to its clever Double-Walled Design and its innovative 360° Signature Airflow Technology, the Yukon is capable of quickly achieving an ultra-efficient burn that rapidly brings your kindling and chunkwood to brilliant flames in just a matter of minutes. All in all, this outdoors fire pit offers you some very convenient features that make it easy to use, fairly easy to clean, and great for keeping all of your friends and family nice and toasty while gathered around its roaring flames.
Read more
Home Gadgets

The Bath Bean is a bean-shaped body stopper accessory for bathtubs made of high-quality anti-microbial silicone that's designed to keep you in one spot while bathing in a bathtub, ultimately preventing you from sliding down. In addition to keeping your comfortably propped up within your bathtub, the Bath Bean's non-slipping design also helps to keep your hair dry! By using this ingenious silicone bath-wedge accessory, you can comfortably recline, relax and stay put while bathing in your bathtub.
Read more
Home Gadgets

The Loftie Clock is a simplified and thoughtfully connected smart alarm clock that's specifically designed to replace your smartphone's alarms so that you can ultimately get more sleep, featuring a dimmable digital display, a warm nightlight, a built-in Bluetooth speaker, and a Two-Phase Alarm Clock. Users can easily customize its alarm tone, the volume-level, and also the days of the week that they want its Two-Phase Alarm Clock to be active. Moreover, the Loftie also boasts a built-in Library of Custom Wellness Content with different relaxing sounds, including Sleep-Time Playlists, Soundbaths, Breathwork Exercises for guided meditation, and even many different Background Noises. Lastly, users can also add their own Media Content to the Loftie in order to play it directly from its built-in Bluetooth Speaker. All in all, this ultra-minimalist smart alarm clock is designed to eliminate literally any excuse that you can possibly have to require going to bed with your Smartphone. With it, you can ensure that you keep your Smartphone outside your bedroom for a more relaxed nighttime and sleeping experience.
Read more