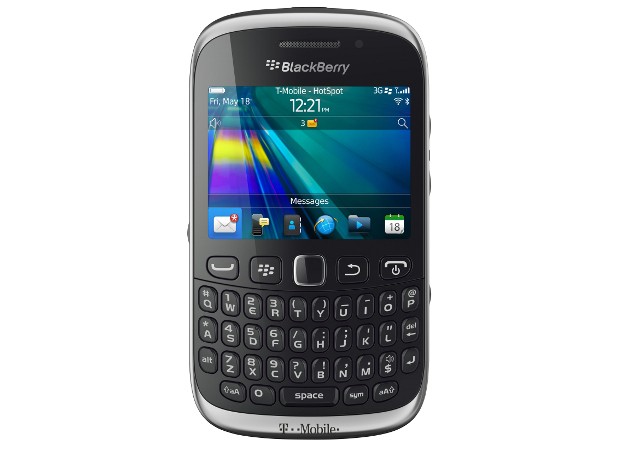 T-Mobile outs another Blackberry 7.1 model.  It’s a slightly different version of the Curve.  The 9315 has a QWERTY keyboard that also features a dedicated BBM key, a 3.2-megapixel camera and a built-in FM Tuner.   The most interesting thing about this new handset is it’s price….a mere $50 after a mail-in rebate and with a two year contract.  So how will the 9315 do sales-wise when it goes on sale January 23rd considering RIM is set to take the wraps off its next-gen devices?  We’ll see in a couple of weeks.

BELLEVUE, Wash. and WATERLOO, ON – Jan. 3, 2013 – T-Mobile USA, Inc. and Research In Motion (RIM) (NASDAQ: RIMM; TSX: RIM) today announced the most affordable BlackBerry® smartphone on T-Mobile’s nationwide network – the BlackBerry® Curve™ 9315. Powered by the BlackBerry® 7.1 operating system with 3G connectivity, the sleek new smartphone is easy-to-use and provides tools that enable customers to stay connected to the people and information that matter most.

“At T-Mobile, our goal is to delight customers. The new BlackBerry Curve 9315 will delight customers with unprecedented value while also allowing them to combine their mobile business and personal use in one great device,” said Brad Duea, senior vice president of product management at T-Mobile. “The Curve 9315 is the most affordable BlackBerry smartphone on our nationwide network and provides our customers with a wide variety of productivity and social features to keep them connected and make their mobile lives easier.”

“We’re pleased to work with T-Mobile to bring the BlackBerry Curve 9315 to customers,” said Richard Piasentin, managing director for the U.S. at Research In Motion. “The Curve 9315 is designed to make it incredibly easy to stay connected with friends, family and coworkers and will be popular with customers upgrading to a smartphone for the first time, as well as existing Curve customers looking for a step up in speed and functionality.”

Combining an intuitive interface with a QWERTY keyboard, the BlackBerry Curve 9315 features built-in Wi-Fi® connectivity for voice and data, enabling customers to access the information they need when and where they need it, and Wi-Fi calling, allowing calls and messages over an available Wi-Fi network. With a dedicated BlackBerry® Messenger (BBM™) key, preloaded apps for Facebook® and Twitter® and the Social Feeds 2.0 app, customers can easily interact with their friends, coworkers and social networks whether it’s instant messaging, posting or tweeting.

The new BlackBerry Curve 9315 offers a 3.2-megapixel camera with LED flash and digital zoom as well as video recording capabilities. Customers also have the ability to geo-tag the location of their pictures by utilizing the smartphone’s built-in GPS. In addition, the smartphone features a microSD card slot for up to 32GB of additional media storage and a built-in FM radio letting customers tune in to local FM stations. With the BlackBerry App World™ storefront, customers have exclusive access to a wide range of apps, allowing them to enhance their smartphone experience with entertainment, personalization and productivity apps of their choosing.

The BlackBerry Curve 9315 will be available in an exclusive pre-sale for T-Mobile business customers beginning January 16 and is expected to be available in T-Mobile retail stores, via www.T-Mobile.com, and with select dealers and national retailers beginning January 23, 2013. For well-qualified customers, the Curve 9315 will require a $49.99 out-of-pocket down payment and 20 equal monthly payments of $10 per month via T-Mobile’s Equipment Installment Plan (EIP)1, with a two-year service agreement and qualifying T-Mobile Value voice and data plan. Customers may also purchase the Curve 9315 for $49.99 after a $50 mail-in rebate card, with a two-year service agreement and qualifying T-Mobile Classic voice and data plan.2

1EIP: On approved credit and 0% APR. Qualifying plan required for duration of EIP agreement; account must be in good standing. Available only in participating locations; not available in Wash., D.C.
2All prices, taxes and fees additional.

For more information on T-Mobile products and services, visit http://www.T-Mobile.com.

The Archos 7 looks pretty much to be locked-in for CeBIT in around a week’s time, but according to Archos’ German PR team the...
Read more
Cell Phones

LG recently announced that it has started production to produce screens for the iPhone 5, and it looks as though the new screens will be...
Read more
Cell Phones

Looxcie has come out with a follow-up to their first product, the Looxcie wearable bluetooth camcorder.  The Looxcie was a revolutionary step in terms...
Read more