Doctor’s tell us to get at least 7 hours of sleep a night, and even more important, teens are supposed to get 8-10 hours. It’s reported, unfortunately, that at least 35% of adults and almost 70% of teens, ages 14-18, don’t get those vital zzzzs.

Casper, the same company known for making online luxury mattresses, just introduced the Casper Glow Light, a nightlight that’s designed to help you sleep. The Light comes in both a single and a two-pack, and packed with a charging base for each light.

The Glow Light turns on when you pick it up, and it dims or brightens with gestures or when you turn it clockwise and counter-clockwise. Turn the Glow Light upside down, and it turns on or off.  It pairs with the Glow app via bluetooth for additional features, such as dimming, illumination, timer, schedule, etc. 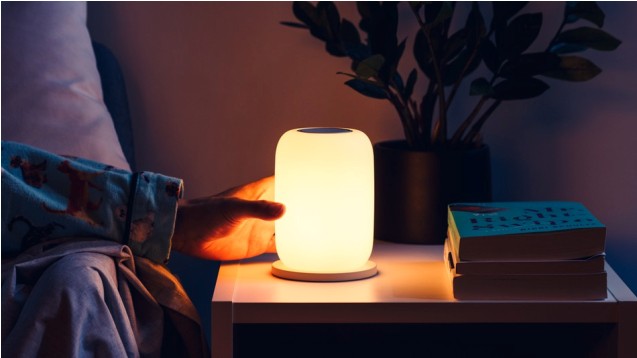 This is one gorgeous and modern light. It has a rounded shape and edges, and an off-white color when the lights are turned off. When the light is illuminated, it has a warm white aura surrounding it, which is bright enough to light up the surrounding area so you can read or simply lighten a room. But it’s not so bright that it’s piercing.

Made from diffused polycarbonate, each Glow light contains a 36 warm white LED array with 12 accent LEDs in amber. When you turn on a Glow light, it automatically dims over the course of a 45 minute default time. You can adjust the 45 minute time-frame in 15 minute increments to any time between 15 and 90 minutes. There is a single button on the top of the light, which allows you to pause the light’s automatic dimming and maintain it at the same brightness level.

Most of Glow’s features are gesture-controlled. You can shake the light to wake it up and get a dim, low light. You turn it upside down to turn it on or off, you rotate it counterclockwise to dim, and you rotate it clockwise to brighten. 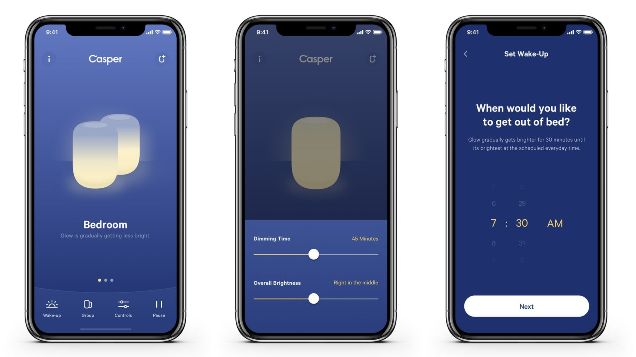 The Glow works with the Casper Glow app, available for both Android and iOS, via Bluetooth. The app can perform a few functions like turn the lights on and off, adjust the maximum brightness, adjust the default dimming time, or assign the lights to groups so they can work in tandem. Unfortunately, the Glow is not Alexa, Apple HomeKit or Google Home-equipped….yet.

Perhaps, Glow’s best feature is it’s portability. You can place it in any room since it doesn’t need wires. Just charge it up, and it will last for 7 continuous hours. Besides on your nightstand, you can also light up your backyard, use it as a lantern on an outdoor table, or even use it while walking the dog.  If you wake up in the middle of the night, you can take the Glow light to the restroom without turning on the bedroom light, or you can use it as an emergency light should the power go out. 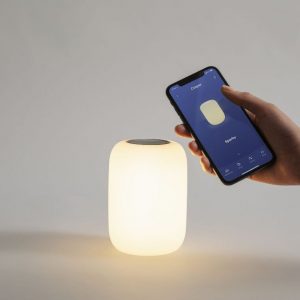 Glow promotes sleep because it produces a warm hue of 2700k, which means it gives out little to no blue light. Blue light has been shown to disrupt to natural sleep rhythms. Additionally, Glow gradually dims over a period of 15, 30, 45, 60, or 90 minutes and then turns off. The default time is 45 minutes, but you can adjust that setting in the app, or stop it from dimming using the button on the top of the light. When you turn on the Glow light before bed, it’s will help you wind down and fall asleep as the light dims down to the off position.

In the morning, the reverse occurs. It starts off dim, and then it brightens to wake you up. It simulates sunrise in your bedroom. You set a time when you want the light to wake you. 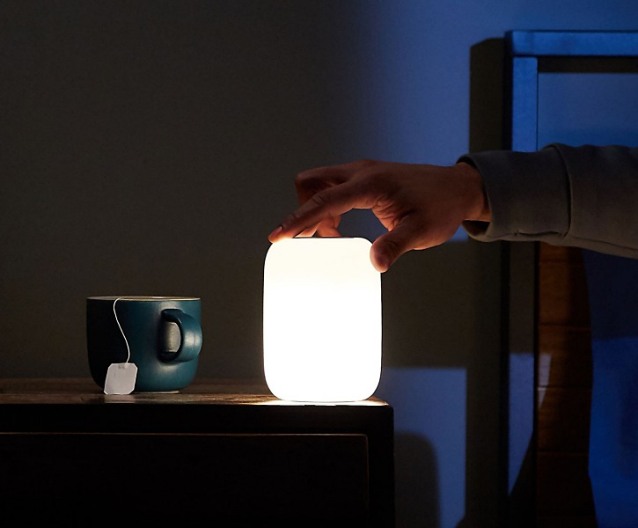 The single Glow light costs $89, and a two-pack costs $169. It has a very sleek design, and it’s sleep aid function is quite unique. Also considering its portability, gesture control and app, the $89 price tag is a steal.

David Novak
Previous articleIs a 15-Inch Gaming Laptop The Right Size For You?
Next articleNext iPhone Could Use Entire Screen as a Speaker

The Honeywell Zeta is a 3-in-1 personal and portable AC unit that works as an evaporative air cooler, as a fan and as a humidifier, featuring up to 10 hours of run time, a Heat Protection Feature, and even a Sleep Mode. Not only does it feature a stronger airflow that can cool you down faster than conventional tabletop air coolers, but it can also work at a further air distance than any other standard air cooler model that's currently available, allowing you to feel its refreshing breeze up to 15-feet away.
Read more
Home Gadgets

The Sun Joe MJ504M is a compact and lightweight manual reel mower that's very easy to use, featuring a foldable foam handle and 4 high-quality all-terrain wheels, an impressive 16-inch wide cutting path, 5 built-in RAZOREEL sharpened steel blades and a set of manual levers that can offer a total of 9 different height settings. Overall, this manual reel mower is very, very easy to use and maneuver around your lawn, and you can also expect it to last you for a long time before even thinking about replacing it.
Read more
Home Gadgets

The Generac iQ2000 Inverter Generator is a portable and super-quiet gas-powered generator that provides you with a trustworthy supply of power at all times. It's perfect for camping trips and backyard / tailgating parties.
Read more

When speaking of good health and personal hygiene habits, it's important to mention that the human body works like a complex system that's interconnected...
Read more
Cell Phones

Looxcie has come out with a follow-up to their first product, the Looxcie wearable bluetooth camcorder.  The Looxcie was a revolutionary step in terms...
Read more
AR and VR

There were rumors that Valve was working on its own virtual reality headset, having previously launched VR kit in partnership with HTC, and now...
Read more