It’s rare that you find a line of headphones offering a fundamentally different user experience than what’s traditionally out there, but that’s exactly what Funky Sound is aiming to do. The French audio startup, founded by its CEO Arnaud Perret, has rethought the relationship between audio hardware and the inputs played through it. So what is Funky Sound’s Debussy range going to do differently?

The products in the Debussy audio range are described as smart autonomous headphones, without the tyranny of either cables or Bluetooth connection robbing your music of audio detail. The range comprises the primary over-ear Prélude model, a premium Prélude X model, and a third on-ear ‘mini’ option.

The design itself is clearly towards the luxury end of the scale, with gold or platinum coloring, premium leather padding, musical notations running along the band, and light red, white and blue detailing to display the colors of the company’s French homeland.

But it’s the touchscreen display that is the show stopper. Set on the left-side ear, this doubles up as a navigational menu and a visual synthesizer for your music, with the option of displaying your own images and videos to personalize what you want your headphones to show off.

What also stands out is each pair’s on-board computer, one that’s able to run streaming apps like Tidal, Spotify and Deezer – over 4G or Wi-Fi – without outsourcing the processing to an external device. You can still link it with your smartphone or smartwatch for playback controls, but the music itself begins and ends in the headphones themselves. You’ll even be able to use an eSim to make calls without a handset.

This line of headphones are truly unique. While the success of Funky Sounds’ headphones will come down to how well these systems and services are integrated, the vision on paper bodes well for the consumer. 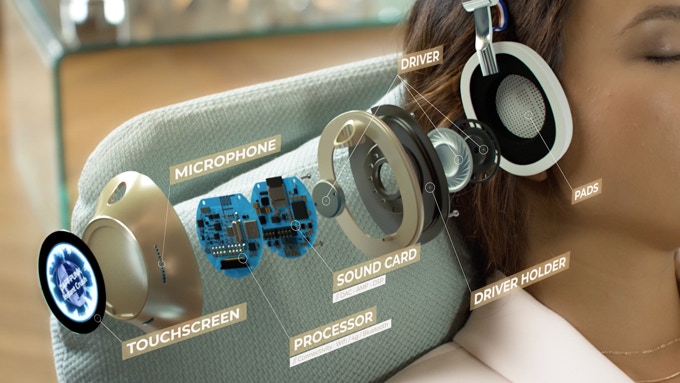 That all includes on-board storage too: the Prélude headphones will come with 32GB for audio files, while the Prélude X pack in a larger 64GB. The Prélude model alone could hold more than 10,000 MP3 tracks, and still have room for thousands of high-grade audio files.

Voice assistants like Alexa and Google Assistant are already starting to make their way into mainstream pairs of headphones, and Funky Sound plans to build in that sort of integration down the line, although with a basic own-brand AI assistant built in by default.

Funky Sound has now launched a Kickstarter campaign to fund its range of Debussy headphones, and in the next few months, we’ll see if the brand comes to fruition.

Funky Sound says its Prélude headphones are aimed at “people for whom music is at the center of their life”. But if the technology moves within reach of more casual listeners, the convenience and reliability of a fully integrated system – one that can host all the various streaming services, apps, and storage you’d need to input audio into your ears – could well impact the way we all consume our music.