It was invented by Doctor of Chiropractic Jason Wersland, after suffering a bad injury in a motorcycle accident, leaving him with a herniated disc and back pain. Dr. Jason has his official statement about the Theragun on the official website, saying “Necessity became the mother of invention, and I made something to help deal with my pain. And that’s how Theragun was born.” Dr. Jason Wersland decided to try percussive massage therapy to help manage his pain, which he defines as a “form of deep soft tissue manipulation.” The Los-Angeles chiropractor created the TheraGun to bring this therapy to athletes that are looking for ways to improve muscle recovery.

Regarding the Theragun G3PRO’s build, the most notable improvement is the noise level.  Wersland claims the G3PRO is fifty percent quieter than the previous model. The proprietary gearbox has been completely re-designed, drastically reducing the noise produced by the powerful motor. It weighs 3 pounds and features two different speed functions that range from 29 to 40 percussions per second, which equates to 1750 turns per second (the newly added speed) or 2400 turns per second (the standard speed). This new and slower speed mode is ideal for sensitive places. 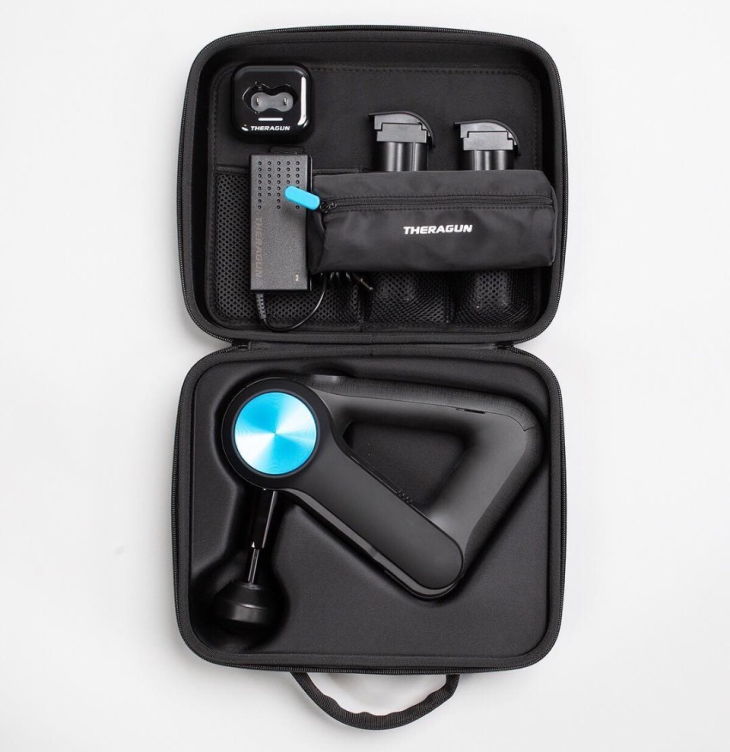 The Theragun G3Pro comes inside a convenient carrying case and features a longer battery life than the G2Pro, which had a combined battery life of 90 minutes. This new model comes with two swappable lithium-ion batteries, as well as a portable lithium-ion battery charger that allows you to swap out one dead battery for a fully charged one, offering users a total battery life of 150 minutes (75 minutes per battery). Only one battery can be charged at a time. 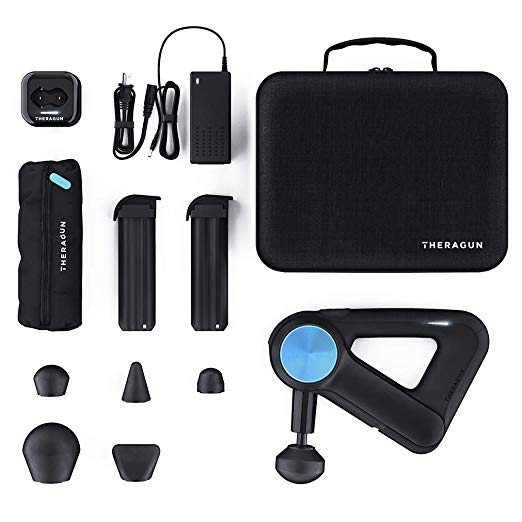 Inside the Theragun G3Pro’s carrying case, there’s also an attachment pouch that contains 6 different physician-designed attachment heads, which help users to treat the muscles as effectively as possible. These attachments include: a dampener (for tender areas or near bones); a large ball (for large muscle groups); a standard ball (for overall use); a wedge (for scraping, shoulder blades or IT bands); a thumb (for lower back and trigger point therapy); and a cone (for pinpoint muscle treatment). All of these attachments go on the end of the new adjustable arm.

The G3Pro was designed for professionals but made for everybody, and is available for around $600. If you’re interested in getting yours, you can purchase it here.

The MedRock HOTROCK is an electric-powered heated foam roller that can be heated up to 175°F (79.44°C) in less than 4 minutes and maintain its temperature.
Read more
Health Gadgets

The EnviroKlenz Mobile UV Model is a mobile air purifier system that combines a high-end HEPA Filter with two germicidal UVC Lamps and an advanced chemistry technology to capture and destroy any fine airborne particles in the air. While its Medical-Grade HEPA Filter can accurately filter, capture and remove up to 99.97% of sub-micron particles from the air that are as small as up to 0.3 microns with a 99.99% efficiency, the system's built-in UVC lamps work in combination with its HEPA Filter by continuously shining a powerful ultraviolet germicidal radiation (UVC Light) on any of the airborne organisms that are collected by its HEPA Filter to effectively kill and destroy those same captured airborne particles. At the same time, the system's patented Earth Mineral Technology works to attack any surrounding VOC (Volatile Organic Compounds) that are present in the air, which then allows the system to break those down to a compound level. This is the main feature that sets this air purifier away from its competition, as it is a brand-new functionality that is not seen in any other air purifier models from other brands.
Read more
Health Gadgets

The Omniball Rolling Workout Ball is an OmniDirectional fitness device that's equipped with integrated Velcro straps, which ultimately allow you to use it as a dedicated set of gripless weights for either your hands or feet.
Read more
Health Gadgets

The Big Fig Mattress + Foundation is a premium hybrid mattress that's ultra-comfortable and extremely soft, while still being bouncy, supportive, and strong. It's the perfect mattress for any person with a bigger body frame, as this 2-piece setup of unique hybrid mattress and specially designed foundation can provide heavier people with around 50% more body-weight support than any other average premium innerspring mattresses that are currently available on the market, as well as support up to 5 times the weight of any typical mattress foundations that are currently available on the market (this goes specifically for the mattress' specially designed foundation).
Read more