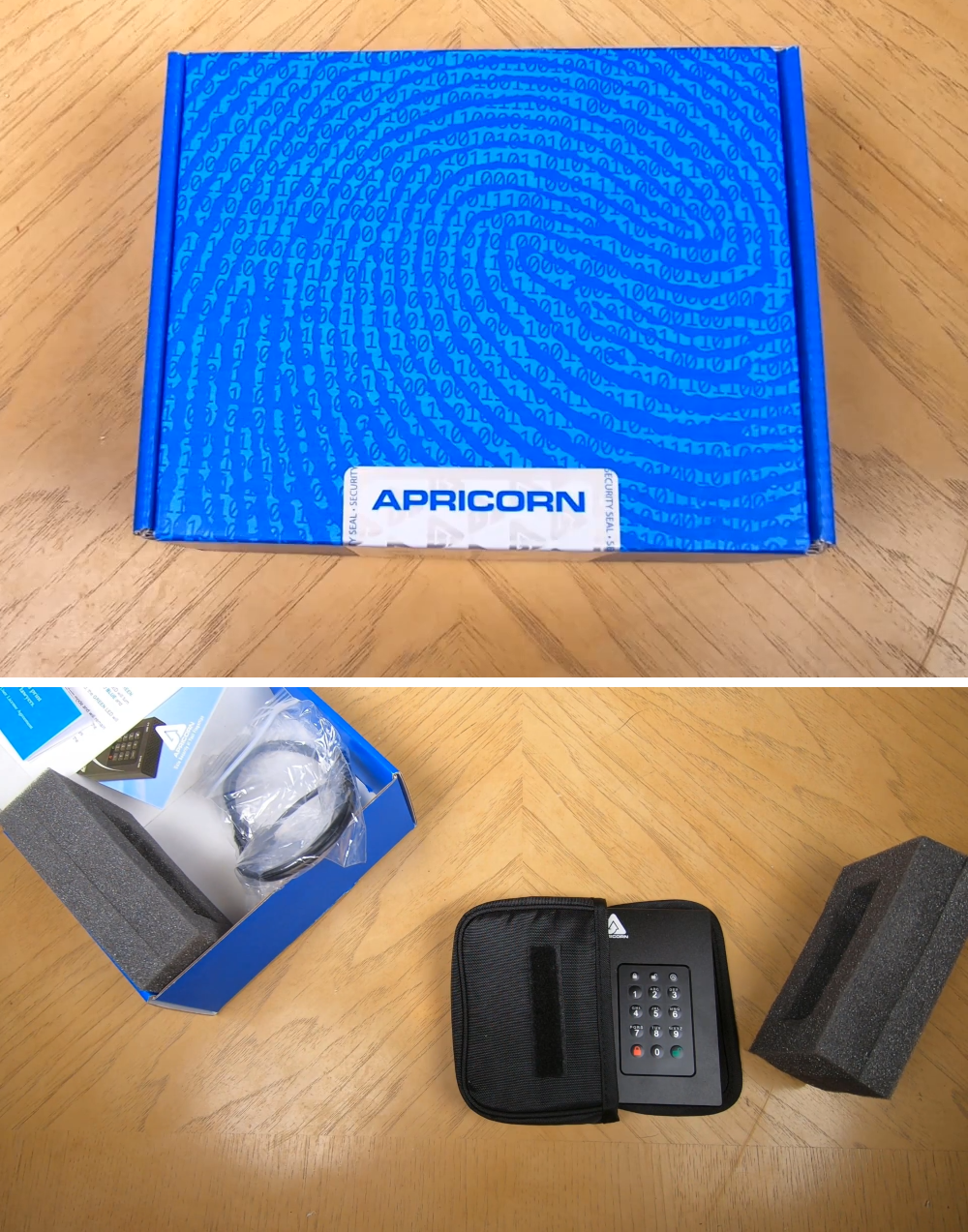 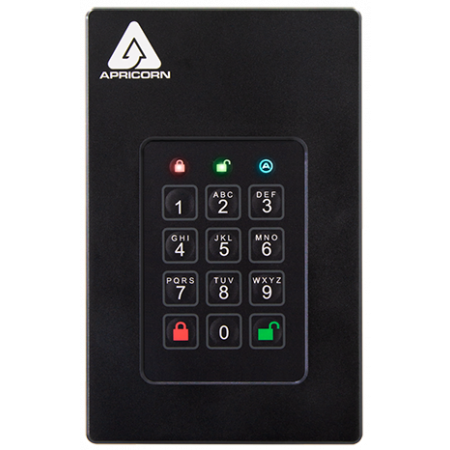 Its new chipset delivers SSD write speed increases of up to 150% and read speeds of up to 180% in comparison to previous Aegis Fortress models, which translates it to up to 180 MB/sec.

The device features software-free setup and operation, making it completely cross-platform compatible and OS agnostic, meaning that it thrives with Windows, Linux, Mac, Android, Symbian and Chrome. It also thrives where software-authenticated encrypted devices can’t function, such as embedded systems and equipment in possession of a powered USB port and storage file system but no keyboard.

HOW DO YOU UNLOCK IT?

The Apricorn Aegis Fortress L3 Encrypted SSD is unlocked by entering a PIN on its build-in keypad, and it will remain invisible to the OS until unlocked. The embedded keypad circumvents all hardware and software key logging attempts to capture passwords by excluding the host system from the authentication process. Users can visually confirm successful button presses via the device’s LEDs. 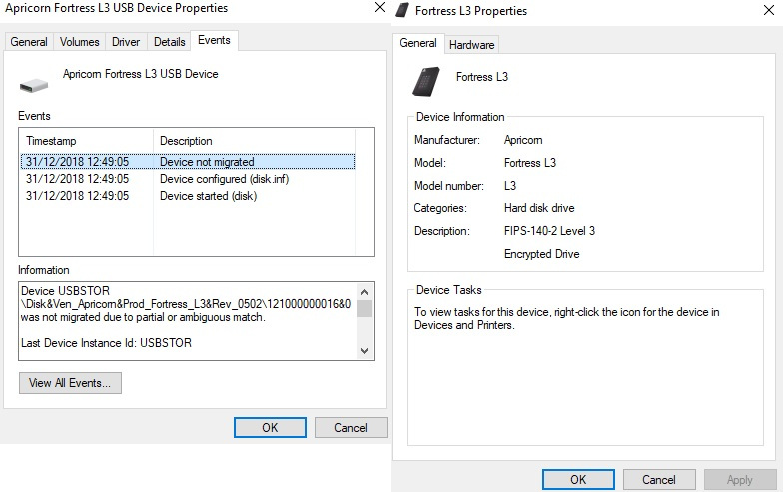 The Apricorn Aegis Fortress L3 Encrypted SSD features a Global Read-Only Mode where all access settings are controlled by the Admin, and a User Read-Only Mode for controlling individual settings. This portable encrypted SSD also features Unattended Auto Lock, meaning users can program the length of time of inactivity permitted before the SSD locks itself. The SSD will also automatically lock once disconnected from a computer’s USB port or the power to that USB port is interrupted.

The Lock Override feature allows the SSD to remain unlocked during USB Port Re-Enumeration (Virtual Machine, Remote Boot). Lastly, the Drive Reset Feature allows users to reset their SSD to default settings as many times as they wish, clearing both the User and Admin PINs, destroying all the data, and creating a new randomly generated encryption key.

A Unique PIN must be established during the Apricorn Aegis Fortress L3’s setup to eliminate Factory Default PIN vulnerability, since factory preset default PINs serve as unlocked backdoors that can easily be used by hackers to access the stored data. The admin can also setup one additional user PIN during the initial configuration so that extra users can access the device’s data. The device can also be deployed in a state of User Forced Enrollment, where the intended user must first establish his or her own PIN prior to using the device.

The Apricorn Aegis Fortress L3 Encrypted SSD features an Admin Mode (Device Configuration) and a User Mode. The Admin mode controls the universal programmable settings of the device and can only be accessed with the Admin PIN. The User mode is limited to basic external drive functions like read /write, unlock / lock, etc, and can also be accessed with the admin PIN.

The Apricorn Aegis Fortress L3 SSD also features Data Recovery PIN creation. This means that if a User PIN is forgotten, Recovery PINs can be programmed by the admin at any time, which will permit access to the device’s data by creating a new state of User Forced Enrollment while leaving the Admin PIN and the drive’s data intact. After a User PIN is generated, access to the drive is restored for the user and that new User PIN serves to replace the previous forgotten one. 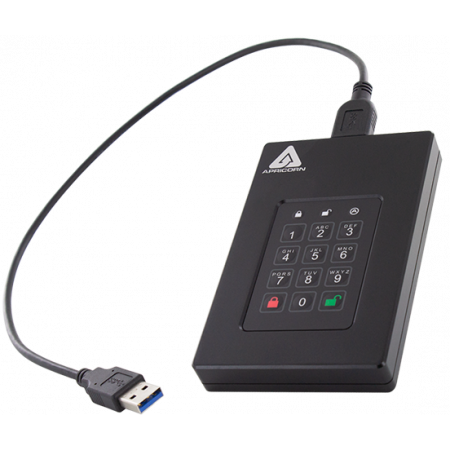 There are also Programmable PIN Lengths. It’s the Admin that designates the Minimum and Maximum PIN Lengths (between 7 and 16 Characters). Keep in mind that the longer the PIN is, the more secure the data on the device becomes. In cases where the User sets up his or her own PIN from User Forced Enrollment, the Admin can set an enhanced User Password Length Requirement as part of the overall security policy.

The Apricorn Aegis Fortress L3 SSD featured Brute Force Hack Defense Mechanism lets users select the number of consecutive Invalid PIN Attempts permitted (programmable between 4-20). This means that if the device comes under a physical brute force attack, your data is protected. If the programmed number (4-20) of consecutive incorrect password entries has been attempted, the device will delete its own encryption key and destroy the ability to decrypt its stored data.

Lastly, the Self-Destruct PIN feature lets users program and activate a PIN that performs a Crypto-Erase and becomes the new Access PIN. This is the Apricorn Aegis Fortress L3’s last line of defense for data security when the device’s physical security is at risk.

It’s small enough to fit inside a pocket or briefcase, and tough enough to go anywhere thanks to its resilient design, making it perfect for traveling and field applications. This secure data storage solution is tamper-evident and well protected against physical damage.

Shopping for home appliances and electronics can be stressful, as there are a host of factors to consider
Read more
Media Gadgets

The Center Cam is a tiny adjustable middle-screen webcam powered by eye-to-eye HD camera technology that's designed to operate in the middle of your screen, featuring a high-end f2.1, 6mm lens that can record HD Video in 1080p at 30 FPS and in a 65º HFOV Aspect Ratio, along with USB 2.0 Connectivity and compatibility with Windows, MacOS, Linux and Android. Not only is the Center Cam easy to set-up, but it also extremely convenient to use for any of your video-calls. All in all, this adjustable middle-screen webcam ultimately allows users to have a much better human connection with others while video-chatting / video-conferencing with other people, whether that's family members, friends, or even co-workers.
Read more

Marketing Techniques That No Longer Work