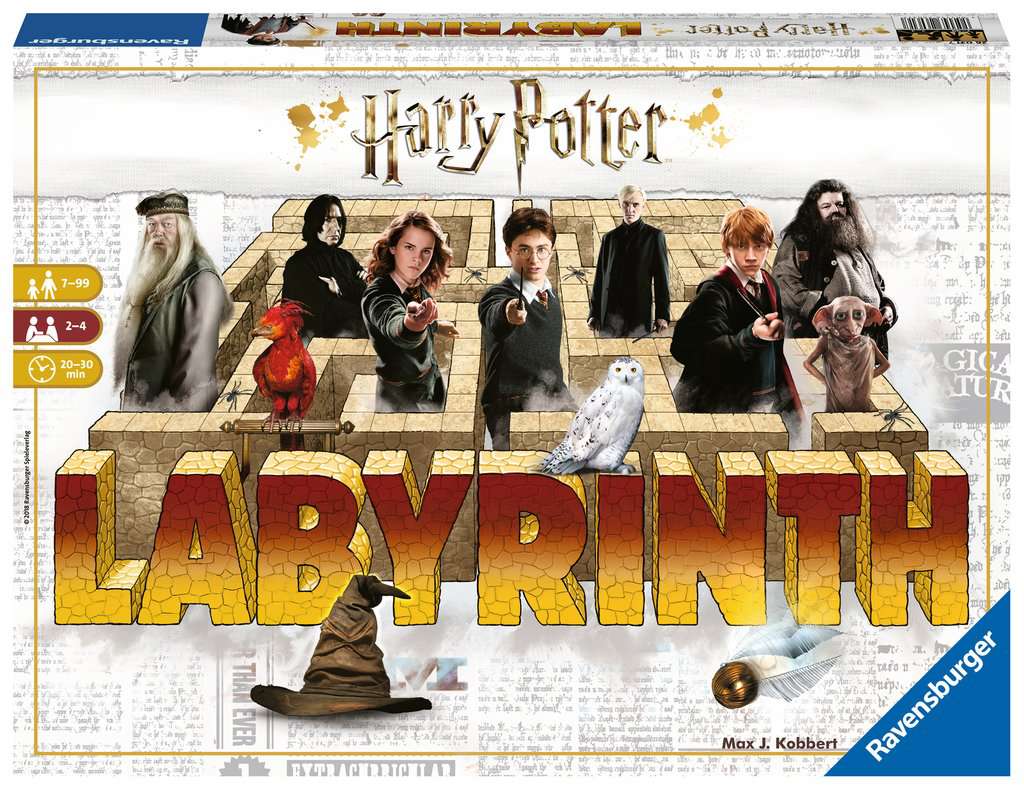 If your part of a family of “Harry Potter” fans, then Ravensburger’s new officially licensed “Harry Potter Labyrinth” board game might be “right up your alley”.

While most board games players might have come across a board called “LABYRINTH” (also known as The Amazing Labyrinth), earlier this year, around April 2019, a new version of the game was released. Ravensburger’s recently released Harry Potter Labyrinth offers families a fun playing experience.

LABYRINTH was designed by a German professor of cognitive psychology and game designer, called Max Kobbert (born 1944 in Königsberg). The original game was published over 30 years ago during the mid-eighties (1986) by Ravensburger, one of the world’s biggest family board game publishers.

What is The Amazing Labyrinth?

In LABYRINTH, Ravensburger’s hugely published popular board game for kids and adults, you have to find the shortest route through the labyrinth to win. The main goal of the game is to reach all your treasures and targets as you move through the labyrinth. This is achieved by landing on a tile that matches your deck’s top treasure card, all the way until you’ve matched all of your deck’s cards.

Since the original LABYRINTH was released, the game has been republished using various popular themes such as Junior Labyrinth, Ocean Labyrinth, Glow in the Dark Labyrinth and more recently Harry Potter Labyrinth.

Let’s now take a fully detailed look at what Harry Potter Labyrinth has to offer.

How does the Game Work?

In Ravensburger’s Harry Potter Labyrinth the board contains permanent tiles and spaces where the loose tiles can be placed, as well as arrows around the edge, which provide players with adequate instructions as to where the single tile can be slotted in.

The main goal in this game is that each player moves their pawn from its House Common Room (one player per each corner square) along the stone-walled passages of Hogwarts to land on the first card photo of their deck.

That top card can be turned up and checked by the player, then turned back down, and all other cards remain facing down.

Players use the single tile available to push all the tiles in one row (marked by an arrow) in order to match up corridors, making their pathway clearer. Players then move their pawn along the passages without passing through walls. While these characters are from a world filled with magic, they are not 100% magical beings themselves (despite using wands to cast magic spells), meaning they still can’t phase through stone walls.

When a player lands their pawn on the tile that matches their first card, they put that card to one side and check their next top card, making that their next target card to find within the Labyrinth. Their pawn will remain on the space it currently is and will only move on their next turn, starting from there.

Other than the walls there are no more movement restrictions, as well as no card play or die roll for movement. Players can move as far along a clear passageway as they wish, as well as stop on any tiles they want to. The first player to land their pawn on all the card pictures by deck order (meaning the first player that successfully puts all of his/her own deck cards aside) is the winner.

The Board – Labyrinth Composition

The board is made up of two halves of eight permanent tiles that form a full square board with 16 attached tiles, one in each corner and then one every other space leaving a grid of 33 empty spaces into which loose tiles are randomly placed, not positioned and not looked at prior to placement.

The 16 permanent tiles that make the grid each have a central picture with a character from the Harry Potter movies. These are the ones you’ll want to be landing on to match with your deck’s top card. 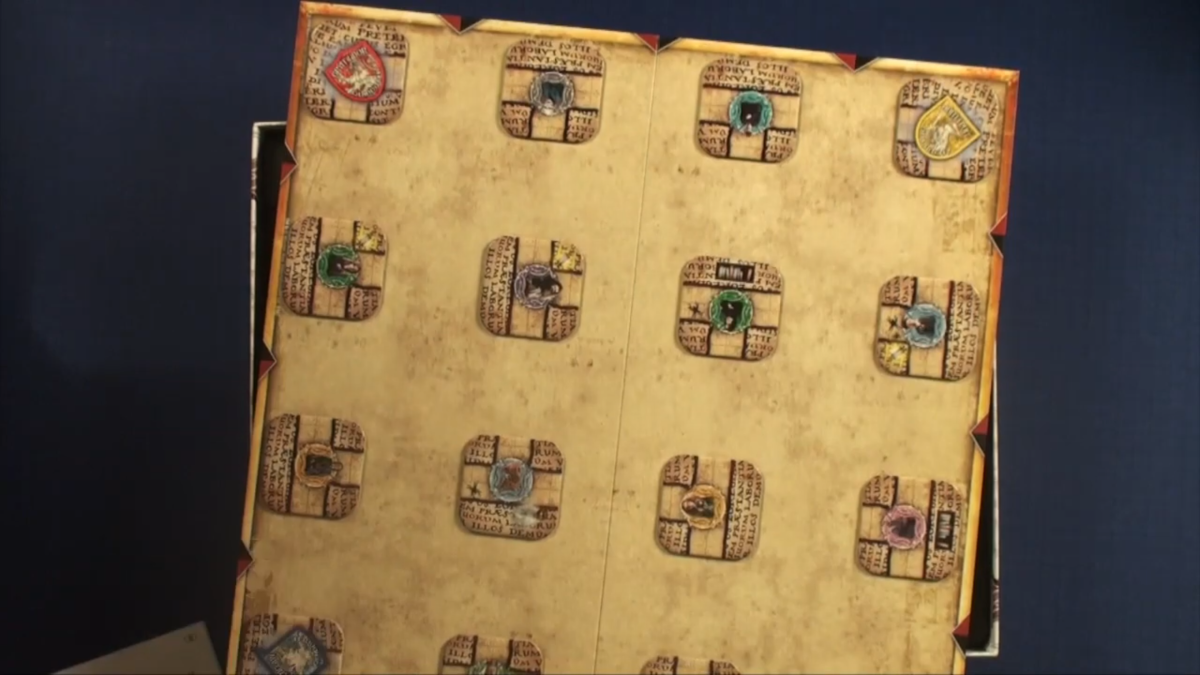 Each of the board’s four corner squares is color coded: Red (Gryffindor), Yellow (Hufflepuff), Blue (Ravenclaw) and Green (Slytherin). Each color matches one of the four player’s pawns and represent each player’s starting squares, one pawn per player placed on their respective colors. 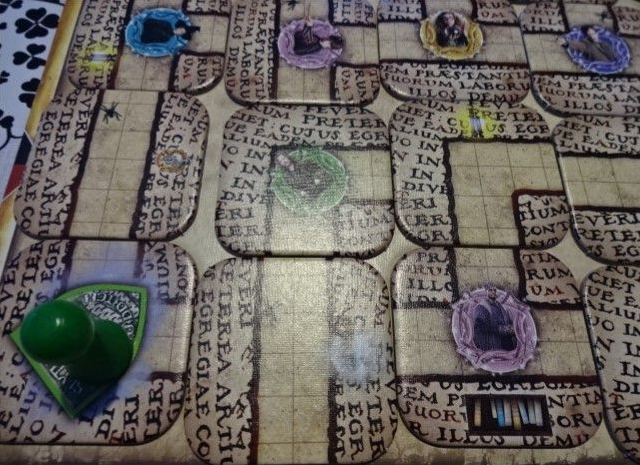 There are 34 loose square tiles that are shuffled/mixed face down and randomly placed face up on the board into the grid, eventually leaving one single tile which is given to the person determined to be First Player. 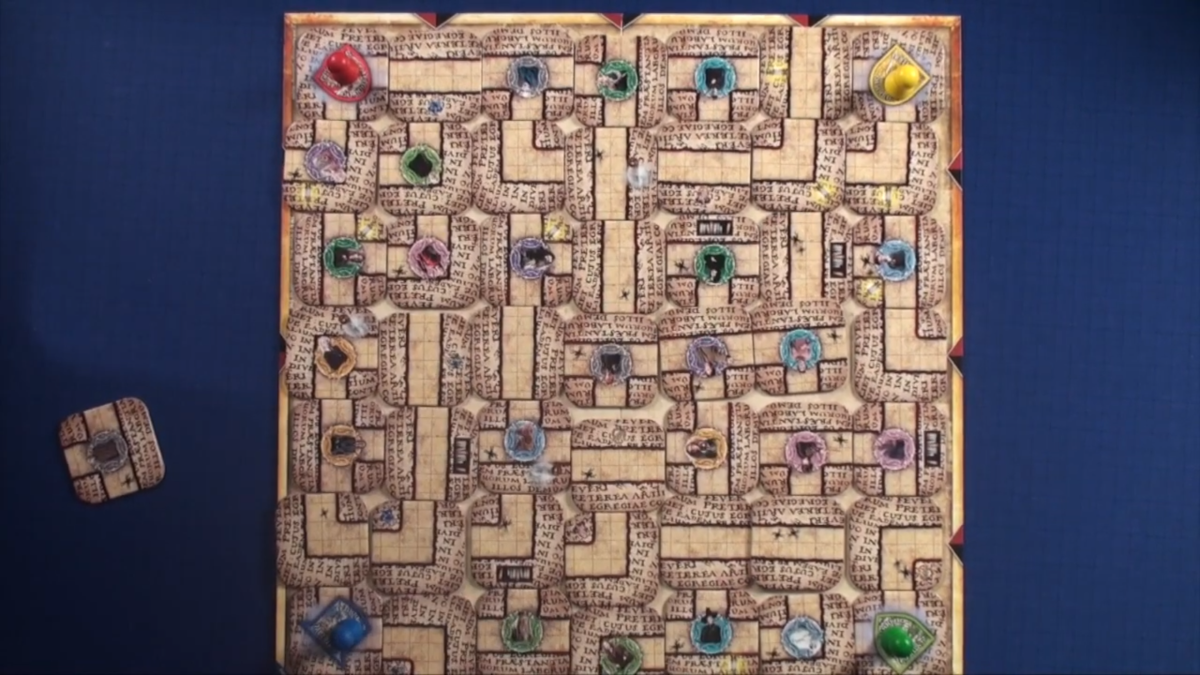 Twelve of the 16 permanent tiles portray the most famous Wizards of Hogwarts; Harry, Hermione, He Who Should Not Be Named, Hagrid, Neville, Severus, Dumbledore, Minerva, Moaning Mertyl, Kingsley, Dobbie and Rufus Scrimgeour.

Keep in mind that the other four permanent tiles are, as said before, the player’s starting corners.

There is a total of 24 photo cards, 12 that match the previously referred permanent tiles, and 12 other cards (these are part of the moving tiles) that represent other characters, including: Luna (in school uniform), Draco, Mad Eye, Hedwig, Dolores, Lupin, Ron, Sirius, Ginny, Griphook, Tonks and Luna (with Spectrespecs Glasses). Yup, you got it right. Luna appears twice while many other favorite characters don’t appear at all. 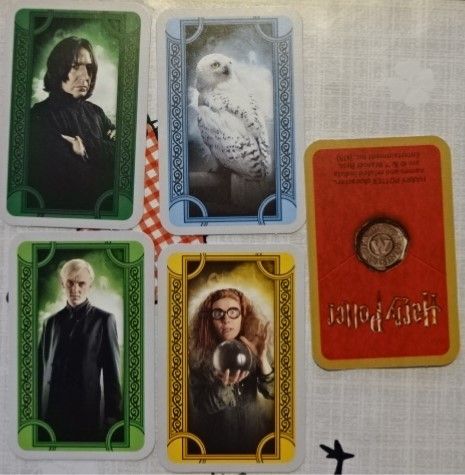 The 24-character cards are shuffled and divided equally between the players. These are kept as separate face-down (unseen) decks – unless you are playing with younger children who are allowed to place all their cards face up in front of them – adults turn over just the top card and keep its identity to themselves. 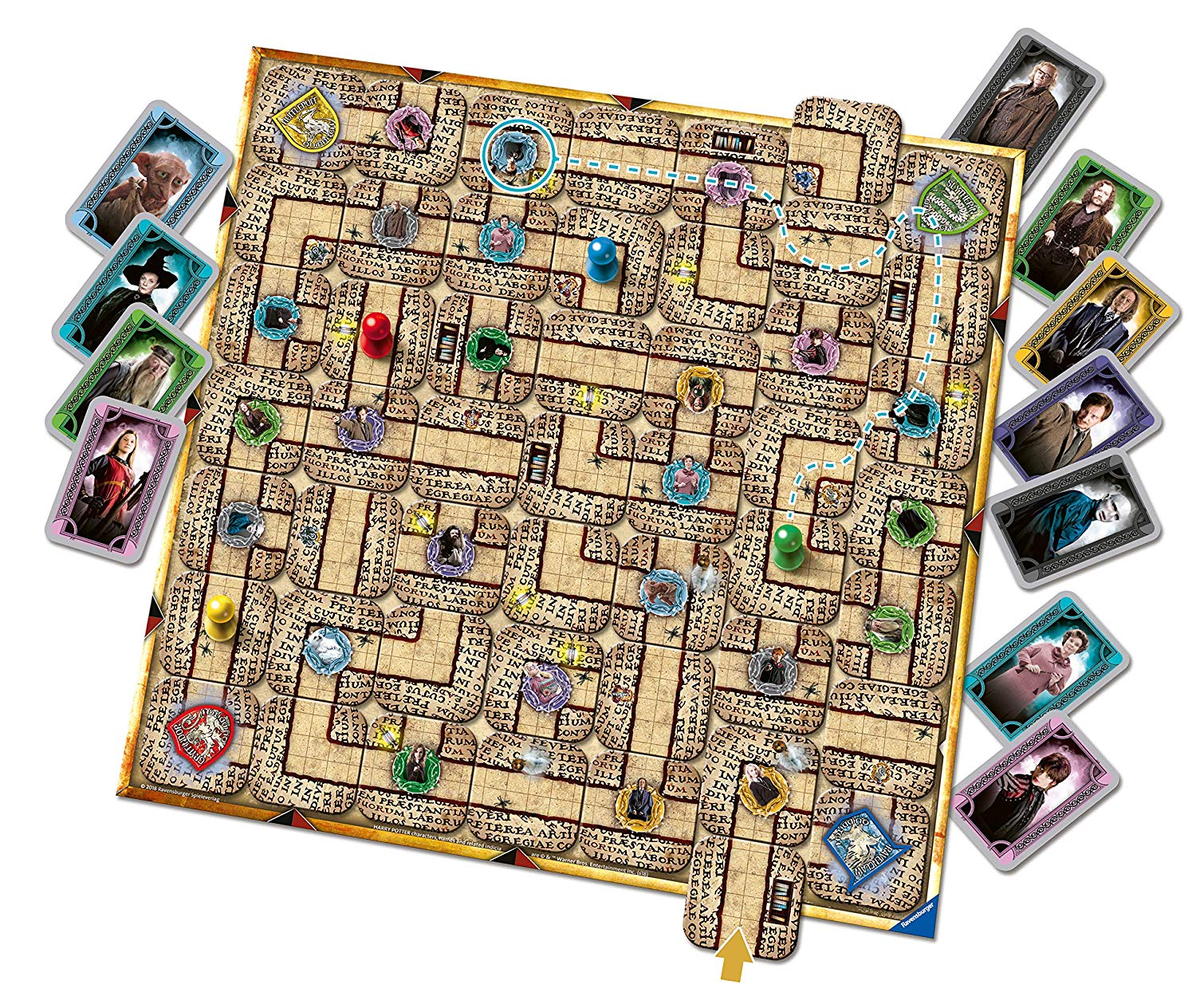 When pushing a single tile into a row, the next player is not allowed to push the same row back again immediately. However, the third player in a game can push the first player’s row back, or just push it in the same direction as the first player. Each time a row is moved many new paths open and many clear paths will close. This means that you’ll need to try to push the tiles so that they trap your opponent’s pawns while simultaneously leaving yours free to move.

There is one good tactic that players can resort to in order to get some advantage. If their pawn is on an edge tile (not one of the permanent tiles) and it is pushed off the board when the loose tile moves the row, then their pawn comes on at the directly opposite tile (opposite side of the board) and can then move from there.

This is a very common tactic when playing Labyrinth, which players can use to their advantage, but they’ll have to manoeuvre their pawn into position the turn before. Just remember that if you manage to make it work, you’ll have to move the tile first, and only then move your pawn. This also means that players can just as easily push opponent’s pawns off the board and push them to the opposite side to ensure they get stuck on a tile with no exits.

All permanent and loose tiles have Harry Potter’s (the movie) magic written on them, and despite meaning nothing as far as the game rules and objectives go, it does create a nice Hogwarts atmosphere. The game’s “magic tiles” also reminds players of the “Marauder’s Map” movie scene (Harry Potter and the Prisoner of Azkaban), where Fred and George Weasley lend a helping hand to Harry Potter, in the form of the magical Marauder’s Map.

The moving tiles are also a metaphor of Hogwarts’ staircases, which tend to move a lot in the movies, and sometimes the main characters don’t even know where they’re going to end up.

The video embedded below will show you a gameplay example of Ravensburger’s “Harry Potter Labyrinth” board game.

What’s in the Box?

Inside the box, players will find many high-quality playing components, including: 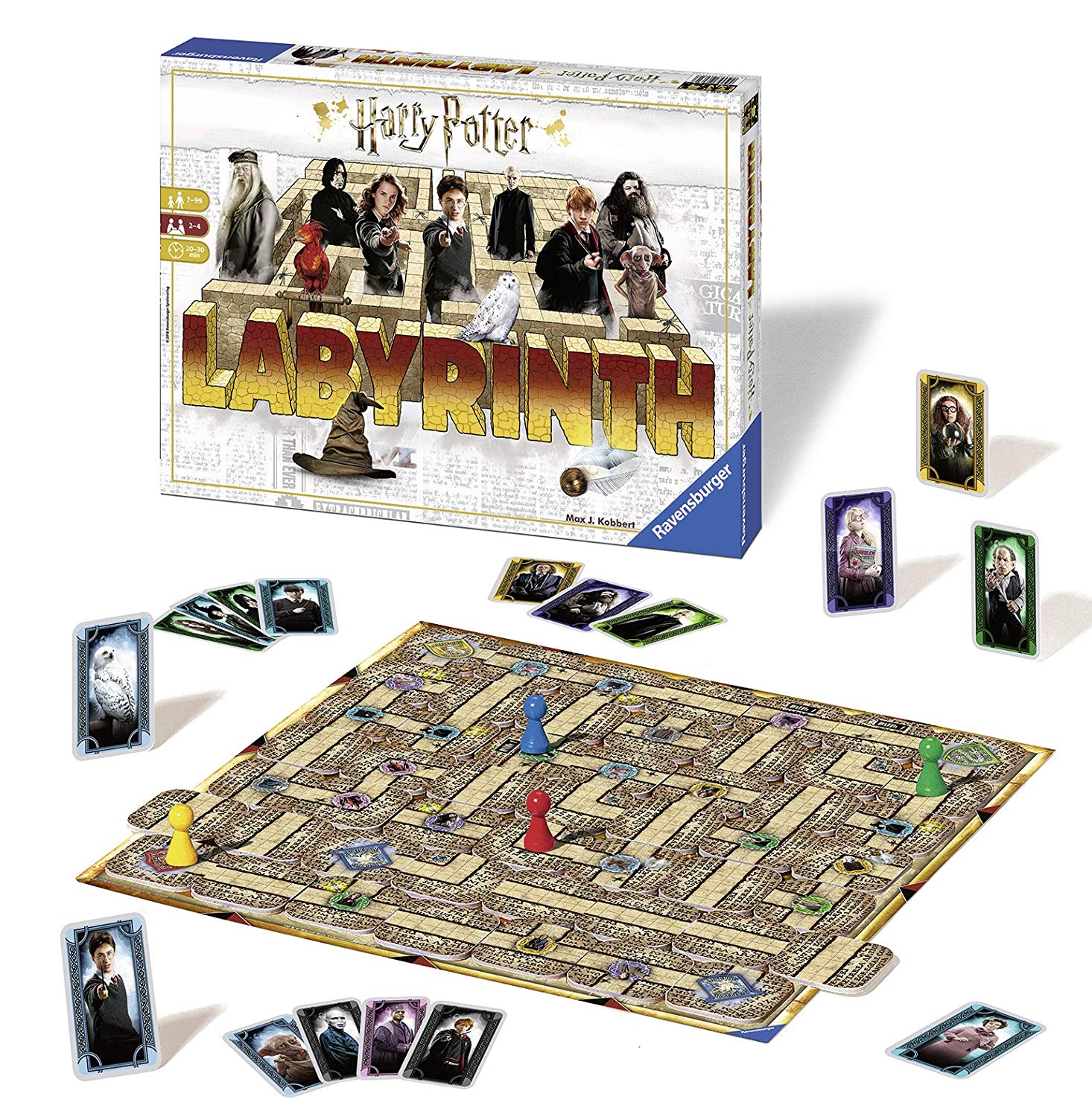 The board is folded to make a rectangle that’s half the size of the actual playing area, making it fit perfectly into the game box. Keep in mind that the permanent tiles fold outwards, meaning it’s imperative that when putting the game away you don’t fold it the wrong way.

The board is made of a decent quality “cardboard” material, but will easily break in half if bent the wrong way. This means that you are advised to keep younger children away from it until they’ve learned how to look after their board games. The tiles are made of a similar material and the 24 character cards are of good quality laminated card.

When playing with younger players make sure they don’t hold onto the cards or tiles in their hands as sweat will damage them, and the same goes for younger kids holding their cards or tiles to their mouths, as saliva will do the same type of damage as sweaty palms will.

Ravensburger’s “Harry Potter Labyrinth” board game is playable with at least 2 players, and can go up to 4 players. It’s suggested that all players sit around a table instead of sitting side by side, although the game is still playable if you don’t mind bumping into others.

The suggested age to play “Harry Potter Labyrinth” goes from 7 years and up, making it a great strategy board game to play with family and friends. This board game has a playing time of around 20 to 30 minutes.

Ravensburger’s “Harry Potter Labyrinth” strategy board game is the same game as The Amazing Labyrinth (from 1986), but features a newer and more up to date theme. Labyrinth is a great game, and is assured to keep your family and friends super-entertained in loads of funny moments. The rules are simple and can be learned pretty quickly, even by younger kids, but keep in mind that you should give the little ones a chance, as they take a bit more time to see how the paths will shift when pushing the tile up/down.

Ravensburger’s “Harry Potter Labyrinth” strategy board game is an amazing maze game that’s easy to play and endlessly exciting. Who can keep a watchful eye over the Harry Potter maze and find the hidden paths to Hogwarts? Harry, Ron, Hermione, Professor Dumbledore, Hagrid, and Harry’s owl Hedwig are waiting for you to find them. Move the maze tactically and find paths to where there were dead-ends. Keep making new paths to find some of your favorite Harry Potter characters. 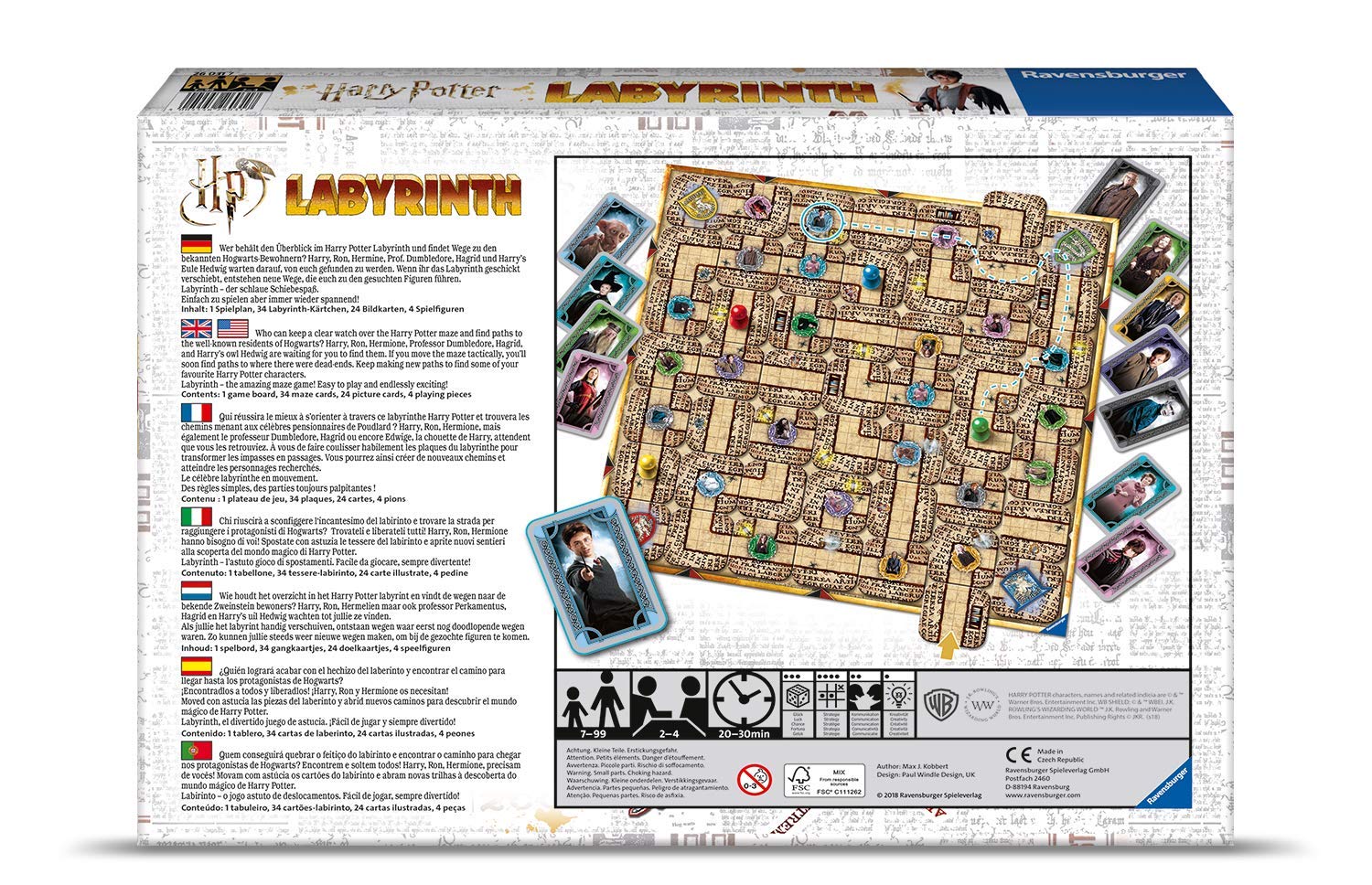 If you’re looking to this Harry Potter version of the Labyrinth game, clicking this link will allow you to order yours right now.