While the world is busy dealing with the new worldwide COVID-19 pandemic caused by the new SARS-CoV-2 Coronavirus, a new dystopian Spanish thriller movie entitled “The Platform” has been released on the famous streaming platform Netflix, this past Friday, March 20.

The worldwide COVID-19 pandemic is still far from being controlled, as many countries around the world have been reporting more and more cases with each passing day. Nonetheless, researchers in Australia have already figured out how the body kills the coronavirus.

Back to the Spanish thriller “The Platform”, which is rapidly becoming viral on Netflix.

This movie couldn’t have come at a better (or worst) time (depending on the perspective), as it also reflects people’s “selfish way of thinking”, which in the current world scenario is the way people are going on selfish hording shopping sprees, as a direct answer and fearful reaction to the escalating COVID-19 worldwide pandemic.

“A vertical prison with one cell per level. Two people per cell. One only food platform and two minutes per day to feed from up to down. An endless nightmare trapped in The Pit.”

In the movie, Goreng (Ivan Massagué) is trapped in a vertical prison with an unknown number of floors.

Each of these floors represents a cell and each cell has two occupants and a huge rectangular hole in the middle of the floor, from where you can see a dizzying precipice that descends from the top of the tower-like prison, all the way down to its base. 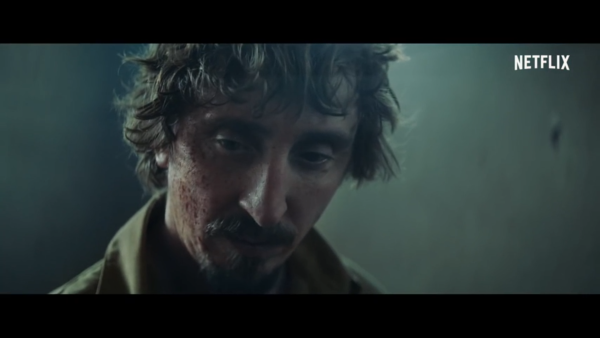 It is through that very same rectangular hole within each floor that, every day, a floating table slowly comes down with a banquet full of lobster, pasta, elaborate dishes, fancy cakes and wine.

Each day, that same table works as a prisoner-feeding platform that starts of as a beautifully elaborated banquet dining table, matching the missing center floor while slowly travelling down from floor to floor, serving for hungry prisoners to eat so that they basically do not starve to death.

However, there is one main issue that makes the whole plot very interesting. The table starts from this tower-like prison’s very first floor (right at the top) where the first two prisoners eat whatever they want.

Then, every two minutes, the table slowly makes its way down, all the way to the very last floor at the bottom, where all the other prisoners (excluding the first two) are left with the food scraps that remain after multiple descents along the building. 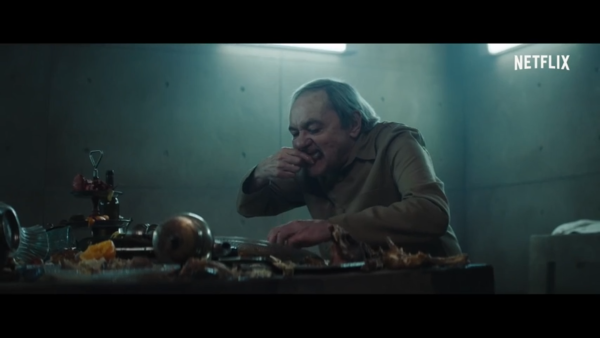 This Platform Feeding Table is what gives the movie its clever metaphorical and “double entendre” title “The Platform”, reflecting both the Vertical Prison where the movie takes part, as well as a capitalist-like ranked society where upper classes are “served” (pun intended) better than lower classes. 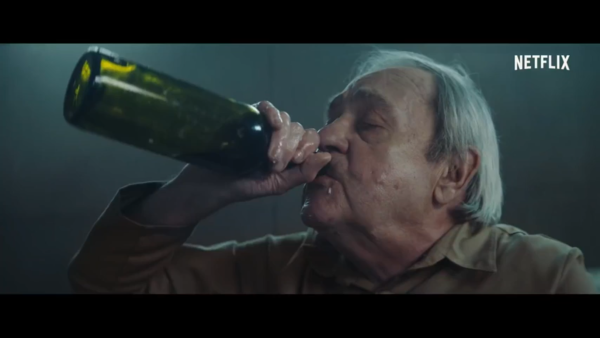 In the movie, if everyone ate only what they needed, the food would be enough to reach the bottom floor. The problem, of course, is that that simply does not happen.

This is the premise of the story on which Netflix’s new thriller is based on. “The Platform” is a conceptual work, carried out by the Spanish Galder Gaztelu-Urrutia, in which the movie aims to be a metaphor for what capitalism really represents in its most corrupt state.

This reflects a capitalist society and the way how its upper classes are benefited when compared to the ones below them; and the same sadly happens between the Middle and the Lower Classes.

In the movie, all prisoners know that they will change floors after 30 days. In this change, they may end up as likely at the top of the prison or at its very bottom, where they’ll obviously be greeted by an empty dining table, full of nasty crumbs of food and disgustingly licked dishes. 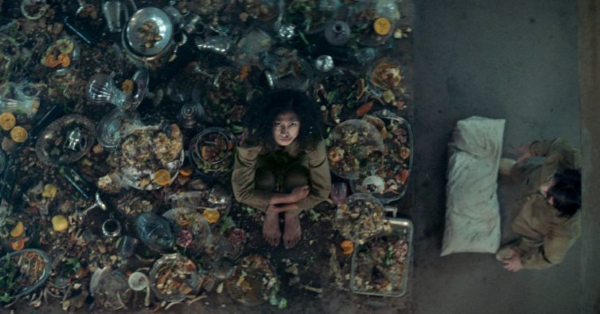 This is where the ethical thinking of each character comes into focus, highlighting that each prisoner can eat whatever they feel like or, instead, think about the next group of prisoners below them and leave something for them, knowing very well that they can potentially be put in their place within the upcoming days.

Nonetheless, many prisoners staying at the upper floors choose to selfishly consume excess calories as a way to store enough fat to survive if they end up at the bottom of the “food chain” (the bottom of the prison) – second pun intended.

This, once again, highlights the ego-centrism of many when pushed into a metaphorical wall with one though choice to make… To struggle and try to overcome a challenge together with others or to ignore everyone else and strive with slightly higher chances of surviving alone.

“The metaphor on food hoarding during these times of enforced lockdowns is hammered in with a bludgeoning directness. There is very little tact and way too much gleeful gore and graphic turpitude in this uneven if somewhat intriguing drama of depravity, decimation, dread and death. Do yourself a favor. Stay away from this unorthodox take on a nihilistic civilization eating into each other’s territory. Watch something happier.”

With the unexpected Coronavirus hitting the world by storm, tons of people rampaged supermarkets, selfishly thinking only about themselves while hording as many grocery items as possible (like the unreasonable toilet paper hording for example), instead of thinking about others while ultimately leaving stores with little (or nothing) for those who came next.

Let’s remind each other that we’ve built the world together, and, as such, we’ll obviously have a better chance of successfully enduring this worldwide mandatory curfew, as well as its associated COVID-19 pandemic by standing together and thinking about all of us as one strong and united society.

Horrified: Universal Monsters Board Game by Ravensburger releases this Summer