Some photographers, videographers may need to have a better control over where the light falls in a specific scene, or maybe they might want to have a narrow spotlight that creates images with dramatic light and dark tones. That’s where external (also known as off-camera) flash accessories come in handy, as these can offer anyone that’s passionate about photography a much better control over where light will fall in a scene as well as from what walls light can bounce off. This brings us to the Innovatronix CPFlash 550W, an innovative, brand-new and recently released external/off-camera flash accessory.

The Innovatronix CPFlash 550W is a reliable Tri-Function Off-Camera Flash accessory for Smartphones, DSLRs or Mirrorless Cameras and Video Lighting FX (effects), boasting a total power output of 550W. This extremely versatile and ultra-powerful flash accessory was built for both studio and travel photographers, as well as cinematographers, videographers and vloggers.

With it, any photography and/or video-recording enthusiast can have really high-quality off-camera flash pictures and videos that simply weren’t possible to achieve with Smartphones; until this point, that is.

Furthermore, users can decide to use multiple CPFlash 550W units and designate one of those as a Master unit – which is used outside the picture – and then set up multiple Slave units – which are used inside the picture as lighting accessories to provide instant glares in specific parts of the scene.

Lastly, it can be wirelessly connected to most recently released smartphones (like the iPhone 11 and iPhone SE 2020 (2nd Gen 2020) for example) via Bluetooth and then be fully controlled by using its free-to-download dedicated CPFlash App (discussed at the end of the article), which allows users to control and adjust all units’ (for multiple units use) flash power, flash duration, and even select one of eight different Video Lighting Effects.

Let’s take a more detailed look at this super versatile multi-use Tri-Function Off-Camera Flash accessory for photography and video shooting and check everything it has to offer.

As such, it can be used either as an Off-Camera flash accessory for Smartphones and DSLR / mirrorless cameras or as video lighting FX (video light with special lighting effects functions) with 550W power output.

Thanks to its short dimensions, the CPFlash 550W is much smaller than most common speedlites (camera flash accessories), which ultimately makes it more portable than most speedlites models available on the market.

This ultimately gives any photography and/or video-recording enthusiast a lighter, smaller and more portable Off-Camera flash accessory that they can use to shoot and achieve high-quality and properly illuminated photos and/or HD video scenes with proper lighting.

As mentioned before, multiple CPFlash 550W units can be used together as one Master unit and one or more Slave units to then have an external unit (Master) working from outside your scenes (either photography or video scenes) and all other units (Slaves) working inside your scenes as light accessories that create light sources at specific parts of your scenes.

While having multiple units might cause you to think that you’d have higher risks of damage, because you’re basically dealing with a ton of equipment at the same time, that’s not exactly the case.

There’s no need to worry about carrying multiple units around, as the CPFlash 550W was built with both durability and a very long life span in mind. As such, each CPFlash 550W unit is protected by a high-quality extruded metal aluminum metal casing that’s super durable and extremely sturdy, keeping all its internals safe and sound during transport and set up/installation.

That basically means that each unit comes equipped with a ton of little powerful FLASH LED lights that work together to boast a max Power output of 550W and a Lux Output of 95,000 lumens at 0.5 meter with the unit’s light modifier enabled.

Furthermore, and as mentioned before, via the Smartphone App you can have a reliable way of adjusting its Flash Power from 0.5% to 100% as well as its Flash Duration from 80 milliseconds to 500 milliseconds.

When used as a video light, the unit can offer up to 20 watts maximum of video light / FX (lighting effects) power, and users can then adjust its Video Light Power via the App all the way from 0.5% to 100% light power.

Lastly, it’s important to note that looking directly at the CPFlash 550W when being flashed at full power will cause temporary blindness for 2 to 5 minutes This thing is actually extremely powerful, so remember to never aim it directly at anyone as well as to never look directly to a CPFlash 550W unit.

Check the pictures embedded below for a couple of examples of just how good the CPFlash 550W’s boasted 550W lighting power can be: 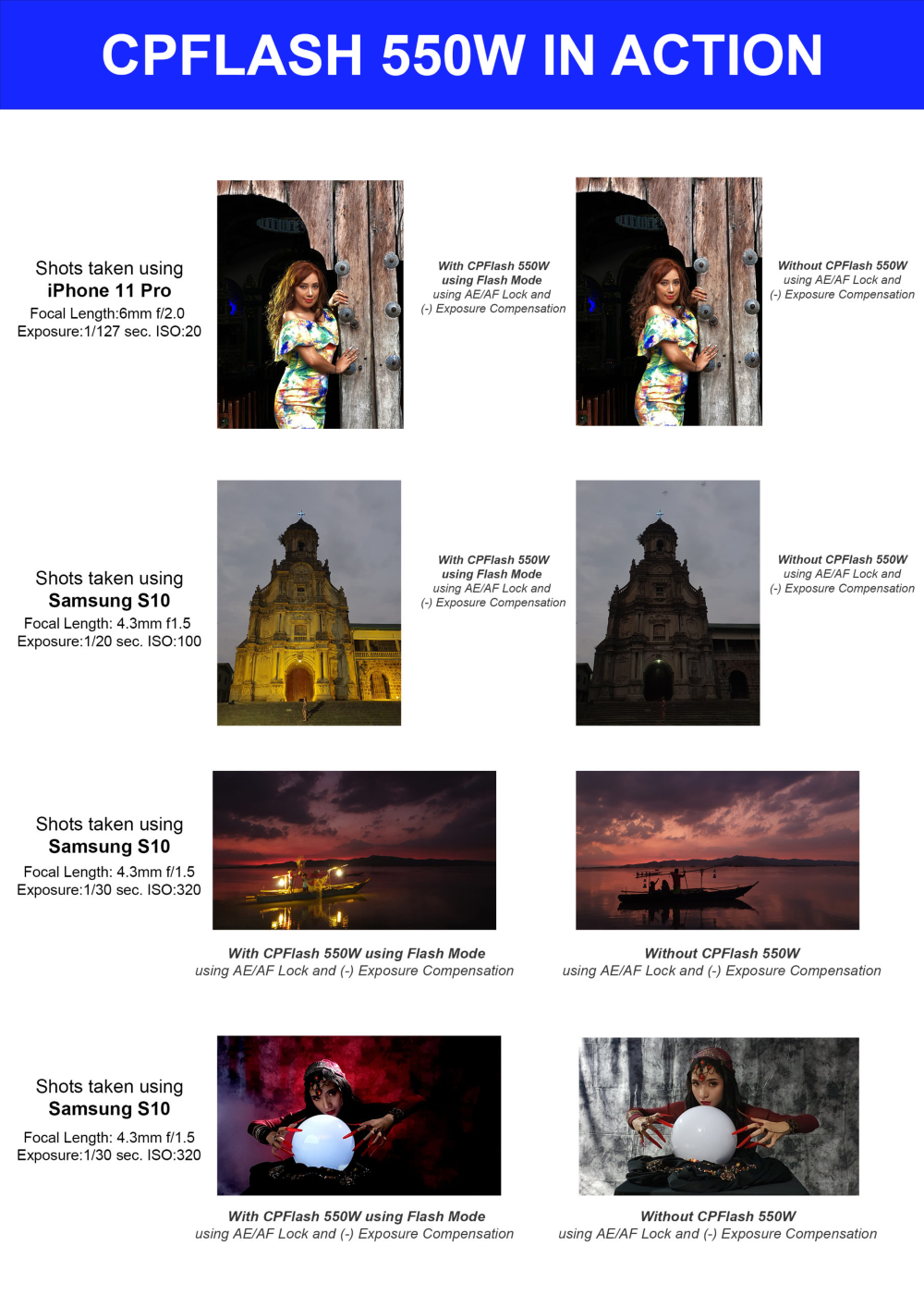 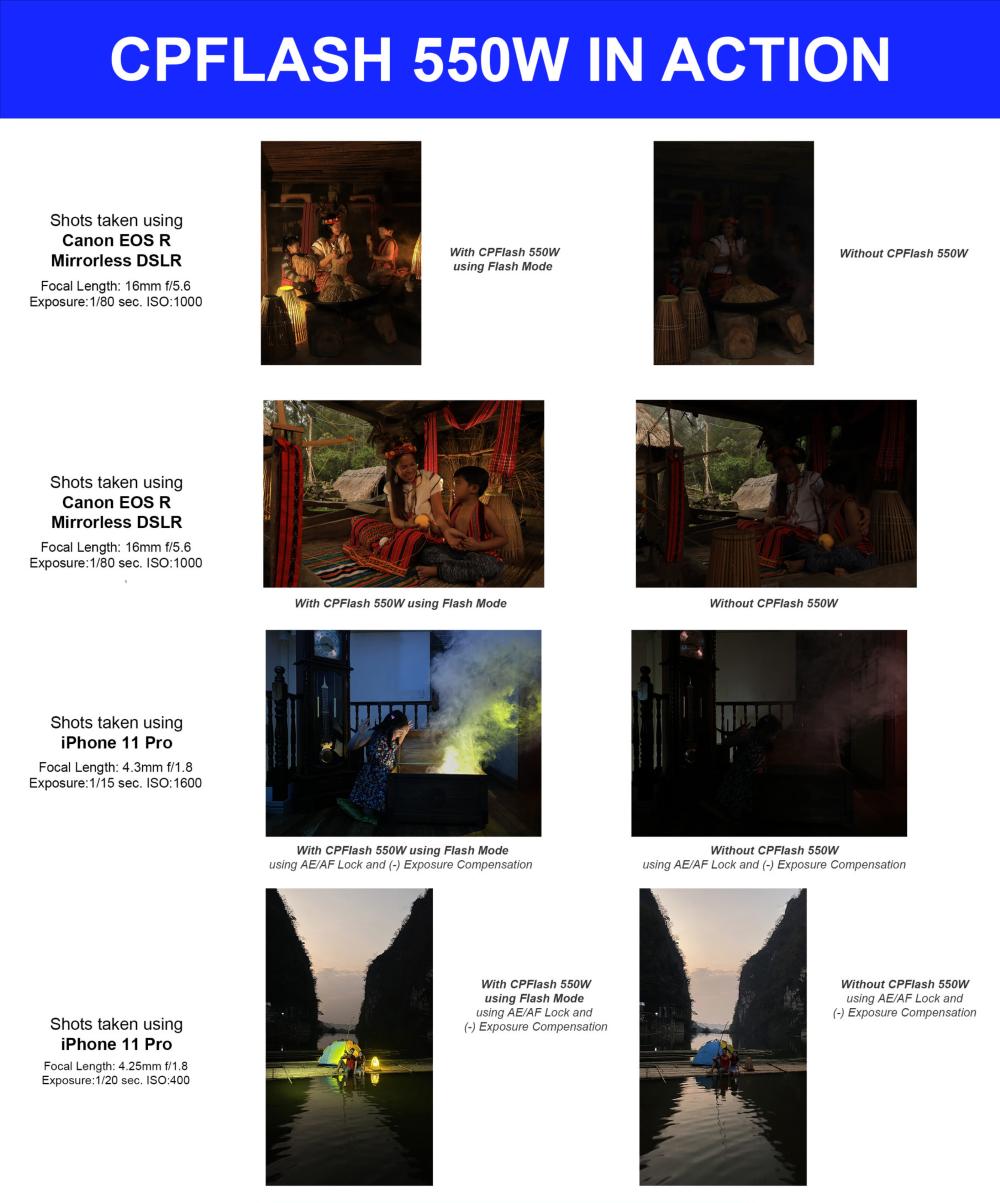 The CPFlash 550W can be wirelessly connected to Smartphones via Bluetooth and then controlled by using its proprietary/dedicated and free-to-use Smartphone Companion App (covered at the end of the article).

However, keep in mind that the CPFlash 550W dedicated/proprietary App gives you many more options.

Furthermore, not only is the CPFlash 550W compatible with Smartphones, but also with DSLRs or Mirrorless Cameras and Video Lighting FX (lighting effects), which ultimately means that it is also compatible with any of your existing and already owned speedlite accessories, thus offering you even more ways of setting up everything together for a better photography and/or video-recording experience. 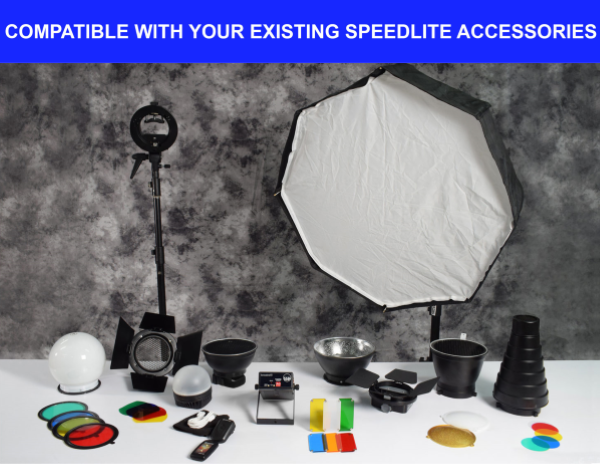 You can connect as many CPFlash 550W units as you want and have them working in a full and perfect sync.

The Master unit – which is always connected to your Smartphone via Bluetooth – can be quickly and accurately synced with your smartphone at any shutter speed.

The maximum distance that you can have between your Master CPFlash unit and your Smartphone is 65 ft. (20 m) in a completely clean line of sight.

For the Master CPFlash unit and its Slave CPflash units, the maximum distance that both can have in between them goes up a maximum distance of 164 ft. (50 m), again, in a completely clean line of sight.

Keep in mind that having large obstacles in the way or even walls will greatly reduce your Bluetooth and/or Radio frequency wave distance.

Each unit comes equipped with a replaceable and rechargeable Industry Standard 18650mAh Li-Ion battery that can offer up to 100 flashes at full-power (its max Power output of 550W and max Lux Output of 95,000 lumens) on a fully charged battery.

Then, instead of using the unit on its full-power, when used for normal shooting conditions, around 300-500 flashes can be achieved on a on a fully charged battery.

Its rechargeable 18650mAh Li-Ion battery can be either replaced during your photography/video shooting sessions (when owning multiple units) or be conveniently charged by using the included Micro-USB, which will only take around 4 hours of charging time.

If you’re not looking to buy multiple units but would still love to have multiple batteries, you could always  get some new spare/extra ones at a very affordable price – around $5-10 – pretty much anywhere, including Amazon.

Use Multiple Units as a Master Unit & Slave Units

As mentioned before, users can set up and use multiple units; one as a Master unit and the remaining ones as Slave units, meaning that you can ultimately have as many CPFlash 550W units connected as you want.

Furthermore, you can also configure those units to deliver one of 8 different lighting effects within your photography/video-recording scene.

Its proprietary/dedicated Smartphone Companion App, which is called the CPFlash App, is available for free for both iOS and Android devices.

The company was also kind enough to provide us with the corresponding QR codes for anyone that wants to download the App that way, and you can find them embedded below.

The CPFlash App allows users to control each units’ (for multiple units use with one Master and one or more Slave units) adjustable flash power, adjustable flash durations, and choose/set from any of the CPFlash 550W’s eight (x8) different Video Lighting Effects/Modes, among many other settings.

This is an extremely versatile and ultra-powerful external/off-camera flash accessory that was built for both studio and travel photographers, as well as cinematographers, videographers and vloggers, and it can ultimately empower any of those creators to have a much better lighting quality within their photo/video scenes.

If you’re interested in buying the Innovatronix CPFlash 550W, each unit is currently going for $199. You can order yours online, directly from Innovatronix’s official shopping page, which you can access by clicking here.

The Dormi Dream Headphones are wireless Bluetooth headband headphones that consist of a soft, elastic, breathable, and machine-washable headband equipped with ultra-thin fabric-encased HQ Speakers and a built-in Microphone for hands-free calling, while also featuring built-in Touch-Sensitive Media Controls, Bluetooth 5.0 Connectivity and up to 10 hours of battery life. All in all, these wireless Bluetooth headband headphones are great for listening to music, white-background-noise, podcasts, or even ASMR, not only during sleep, but also during meditation sessions or even whenever you're just looking to sit / lie down and relax. They're extremely comfortable, very breathable, easy to use and control, and essentially, a wonder to use on a daily basis!
Read more
Media Gadgets

The Andover Audio Songbird is a plug-and-play HiFi internet music streaming device designed to provide lossless decoding of music files from High-Resolution services up to 24-bit/192 kHz, featuring great high-resolution sound quality, an easy setup, both Digital and Analog Inputs and Outputs, as well as Wi-Fi and Bluetooth Connectivity, compatibility with both Apple AirPlay and Sony's DLNA, and straightforward in-App controls. Designed specifically to stream music / audio content through the Internet into pretty much any audio system, this ultra-versatile internet music streaming device can be used to stream just about any type of online audio content, whether that's Internet Radio, Podcasts, or even Internet-based music from Music / Audio Streaming Services. All in all, this is an extremely versatile HiFi internet music streaming device that can cover any high-res streaming needs, all while working with almost any audio system, and that goes for both new and old sound systems. Not only is the Songbird easy to setup and straightforward to use, but it is also very, very affordable, ultimately making it one of the best music streaming devices that you can find available today.
Read more