When hosting a party outdoors, whether during a camping weekend or at your backyard, its important that you have the right piece of equipment to ensure that the party stays alive and “rocking”. Obviously, you’ll only be able to achieve a good party environment by using a powerful party speaker. This brings us to the Ultimate Ears HYPERBOOM.

The Ultimate Ears HYPERBOOM is the company’s biggest, loudest, and “BOOMiest” speaker released to date. Featuring an extreme bass and a versatile and adaptive EQ, the HYPERBOOM can easily make any party that your looking to host the best party that you’re friends have ever gone to.

Still, while this is just a single party speaker unit, don’t let its lack of accessories fool you, as this ingenious party speaker is powerful enough to easily deliver a truly epic sound experience within your entire backyard, no matter how large it is.

Now, let’s take a more detailed look at the Ultimate Ears HYPERBOOM and check everything that this wireless Bluetooth party speaker has to offer.

The Ultimate Ears HYPERBOOM Party Speaker also features a very compact design that makes the unit quite sturdy, giving it a bit of impact resistance against accidental bumps.

Not only that, but there’s also a weather door located at the back of the unit that, once it is fully closed, keeps the speaker protected against accidental water spills and splashes (the latter one is obviously related to pool parties). This weather door offers the speaker a IPX4 water resistance rating. 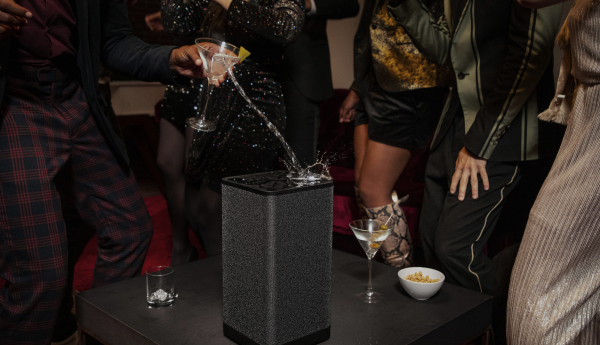 Lastly, the Ultimate Ears HYPERBOOM Party Speaker also comes equipped with a durable, reliable and easy-to-grip Pull Out Strap / Carrying Handle that can be used to easily transport the speaker from one place to another. This Carrying Handle can be easily pulled out or pushed back into the unit to have it stored standing vertically parallel to the speaker. 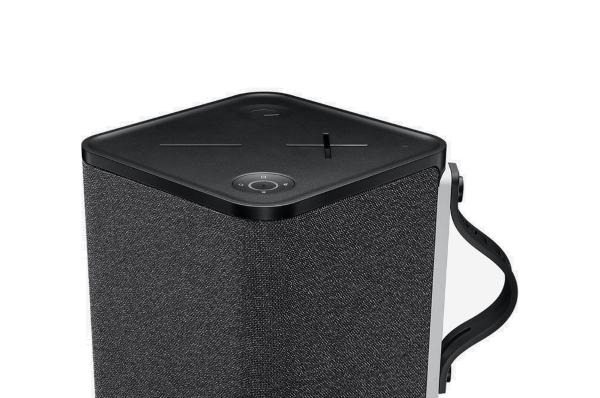 All these audio components allow the speaker to boast quite a powerful sound, which features no distortion whatsoever, even when playing songs with an higher sound pitch.

By combining all of these audio components together, the Ultimate Ears HYPERBOOM speaker can deliver a phenomenal dynamic range and a high-fidelity and vibrant listening experience, and that goes for any volume settings that you decide to set the speaker to.

The speaker’s audio quality is absolutely crystal clear. The highs are there, the mids are always present, and its powerful dual woofers ensure that the speaker always delivers a punchy and resonating bass (the lows).

As such, the Ultimate Ears HYPERBOOM is a no-brainer, as this should be your speaker of choice to take to any outdoors party. With it, you can bring your friends and family a bass-blasting, Earth-shattering party speaker that comes with absolutely no compromises to its sound balance or audio quality, ultimately allowing you to give them a party that they’ll never forget.

Additionally, the speaker also features a maximum SPL (sound pressure level) of 100 dBC and a Frequency Range that goes between 45 Hz – 20 KHz.

At the top of the Ultimate Ears HYPERBOOM, users can also find a very intuitive interface that’s super easy for anyone to use, as the speaker’s interface features a handful of quick-touch music control buttons that can provide a easy user experience when it comes to configuring the speaker’s sound settings. 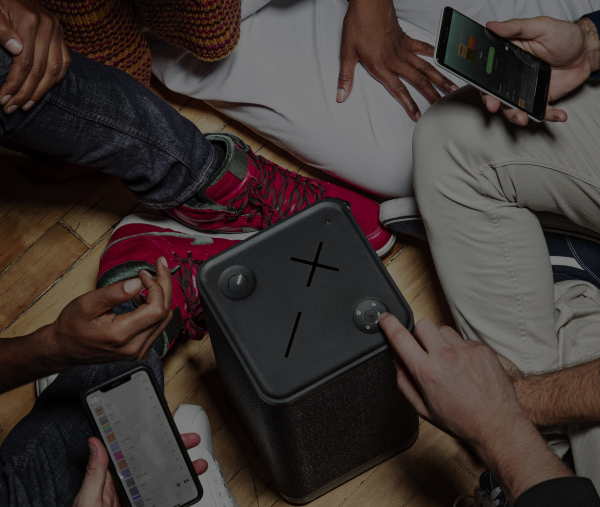 At the very top of the unit’s interface users will find a small opening that contains the speaker’s Adaptive EQ Microphone. 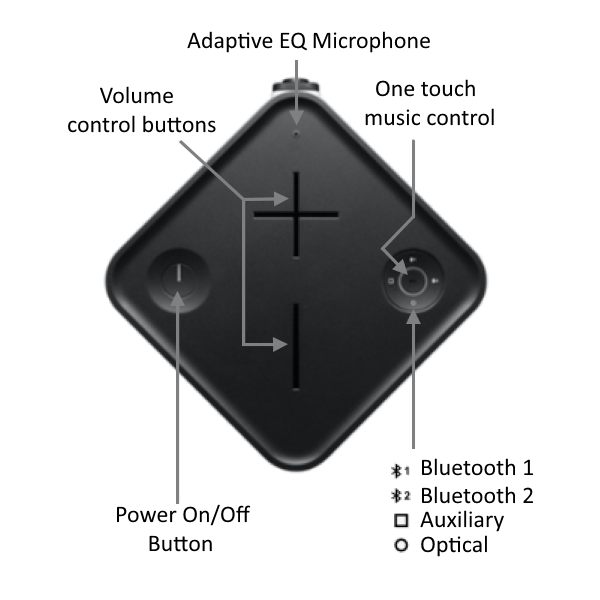 Additionally, you can find two large Volume Control Buttons located at the center of the speaker’s top side (represented by the “+” and “-” signs), a Power On/Off Button (located at the left side of the unit’s control panel), and a One Touch Music Control Dial that integrates a Bluetooth 1 and Bluetooth 2 Connectivity Buttons, as well as an Auxiliary Sound Button and an Optical Cable Button.

These last 4 buttons included in the speaker’s One Touch Music Control Dial allow you to easily and conveniently change between different audio sources with a simple touch of a button. 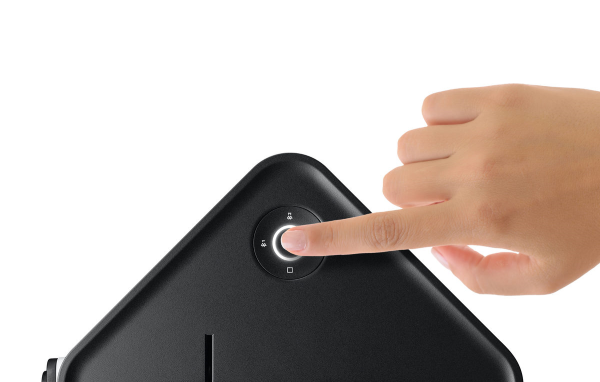 This panel is located right under the speaker’s Carrying Strap and Weather Door and includes a Service Port, a USB Charging Port (to recharge the unit’s internal rechargeable Li-Ion battery – discussed ahead), an Optical Input, an Auxiliary Input, and the unit’s Power Port. 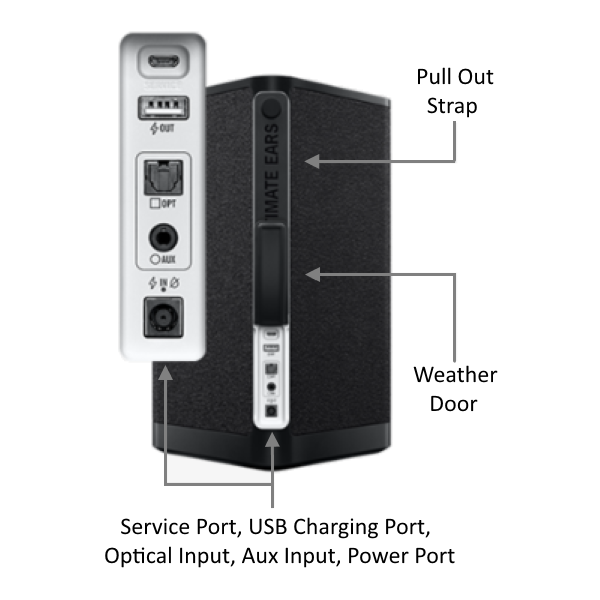 The speaker can very conveniently remembers up to 8 different Bluetooth paired devices, and those can be connected to it via Bluetooth 4.2 or Bluetooth 5.0, as the speaker supports both versions.

The speaker offers a maximum Bluetooth wireless range of 150 ft (45 m), and that ultimately allow you to have a far connectivity range between the speaker and your Bluetooth-enabled devices.

Speaking of Bluetooth-enabled devices, the Ultimate Ears HYPERBOOM Party Speaker is compatible with any iOS and/or Android Smartphones and/or tablets that are running on more recent versions (specifically OS 6 or above for iOS devices), as well as with any other devices that support Bluetooth and the A2DP (Advanced Audio Distribution Profile) Bluetooth Smart wireless audio profile. 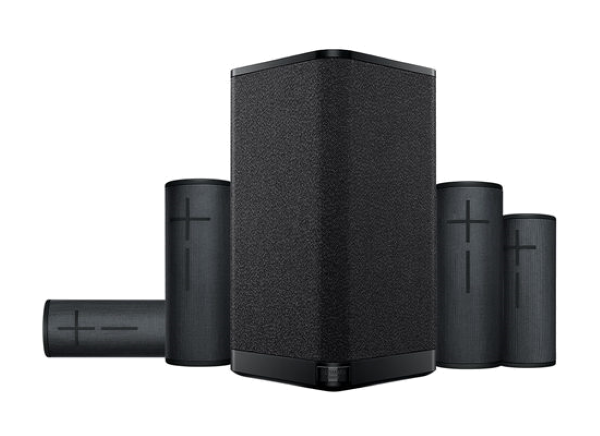 Not only can you have all of those different devices connected to this party speaker for audio playback, but the Ultimate Ears HYPERBOOM can also be connected / paired with the company’s BOOM and MEGABOOM speakers (as well as with a second HYPERBOOM speaker) to ultimately achieve more powerful sound levels (this can be quickly done via the speaker’s Smartphone Companion App, the BOOM & MEGABOOM App – discussed at the end of the article).

As mentioned before, the HYPERBOOM speaker also comes equipped with a built-in rechargeable lithium-ion battery that can offer up to 24 hours of battery life.

Still, it’s important that you keep in mind that these battery life values will most likely vary with what volume settings you use your HYPERBOOM speaker with.

Recharging the speaker’s internal battery is also quite easy, as all you have to do is connect the speaker to a power source via its included Ultimate Ears Power Charging Cable and Power Supply. The speaker’s charging time is around 2.6 hours.

Thanks to the speaker’s previously mentioned Adaptive EQ Microphone, the HYPERBOOM speaker can produce a supermassive powerful sound, no matter where you decide to take it next.

This high-quality built-in microphone is exactly what helps the speaker to understand when it’s being moved, and as such, it triggers the speaker’s Adaptive EQ technology to read the room, ultimately allowing the unit to recognize if it’s on an open area (like a patio, or rooftop) and automatically adapt itself to each location by adjusting / balancing the speaker’s sound settings to the perfect levels for each and every space. 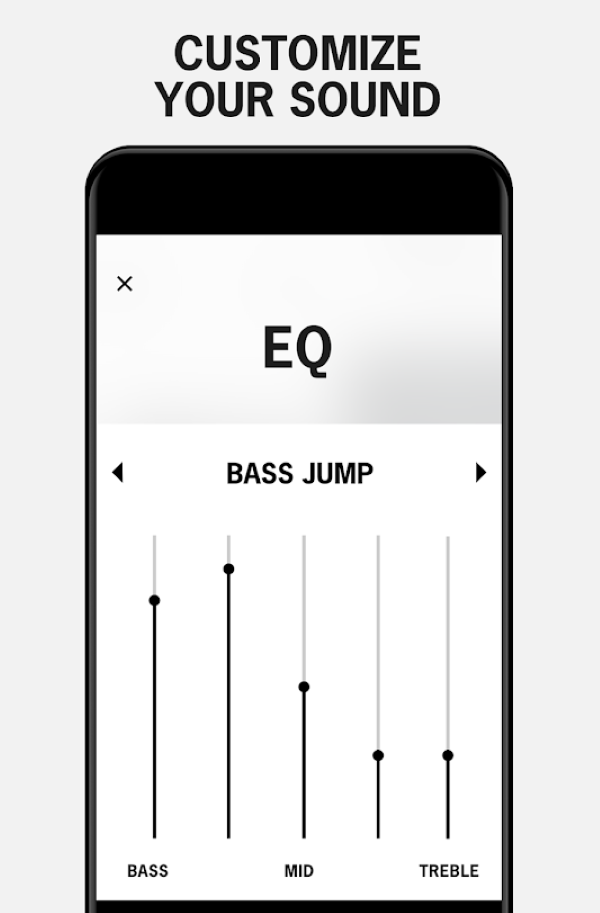 Not only that, but the speaker’s Adaptive EQ can be further adjusted via the Smartphone App (discussed further ahead).

As mentioned before, thanks to the HYPERBOOM speaker’s One Touch Music Control Dial and versatile Connectivity Panel, this party speaker ultimately lets groups of friends play their favorite tunes from up to four devices.

As such, multiple users can very easily switch between those same audio devices without having their party’s music getting paused.

After those connections are all done, just hit the source selector button to easily and instantly switch between your different audio sources.

The Ultimate Ears HYPERBOOM Party Speaker can also be further configured / adjusted via its Smartphone Companion App, which is simply called the BOOM & MEGABOOM App. Its mobile App is available to download for free for both iOS and Android devices.

Other than using the speaker’s One Touch Music Control Dial to control your different audio sources (which you’ll have connected to the speaker’s Connectivity Panel’s input ports) you can also use the speaker’s proprietary mobile App to do the same in a more convenient manner. 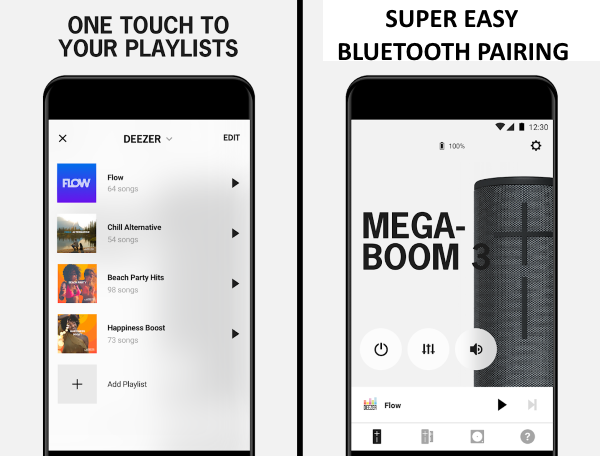 This is a great feature for whenever you’re a bit far from the speaker (let’s say across the room), and you have your Smartphone in your pocket, which ultimately excludes the need to cross over between your group of friends just to change the speaker’s audio source.

Just press a button within the App to have your HYPERBOOM connected to different audio sources that you can easily switch between, as well as to crank up the speaker’s sound settings for louder and more powerful party jams.

PAIRING WITH OTHER COMPATIBLE SPEAKERS

This way, you can easily kick-start a party of truly ultimate proportions.

The Ultimate Ears HYPERBOOM is a reliable and powerful portable wireless Bluetooth party speaker that features amazing sound quality with up to 24 hours of battery life, Bluetooth connectivity and multiple speaker-pairing via Bluetooth.

If you’re interested in buying it, each unit is currently going for $400 each, also coming with a 2-Year Limited Hardware Warranty. You can order yours online right now, directly from Ultimate Ears’ official shopping page, which you can access by clicking here.