Nowadays, more and more tech companies come up with brand-new ingenious “everyday-use” gadgets that come packed with several smart features, including super-convenient capabilities like wireless connectivity options and Voice-enabled controls. Thanks to that, we ultimately get highly capable devices that are smarter than ever. Not only does that include more complex things like Smart Home gadgets and Home Security Cameras Systems, but also simpler things like Smart Printers. As such, you might be looking to replace your potentially outdated and maybe even obsolete home printer and/or office printer. If that’s the case, consider taking a look at the brand-new Epson EcoTank ET-2760.

The Epson EcoTank ET-2760 is an All-in-One Supertank Printer that can be easily controlled either wirelessly (via the its proprietary Smarphone App – discussed at the end of the article) or via easy-to-use Voice Controls, while also offering Cartridge-Free Printing thanks to its easy-to-fill supersized ink tanks, which ultimately allow you to save up to 90 percent of your printing costs by using it with its proprietary low-cost replacement ink bottles.

Furthermore, this highly capable smart printer allows empowers its users with its automatic 2-sided printing and its high-quality 1.44″ color display.

Now, let’s have a more thorough look at this printer and check just about everything that it can offer its users.

Starting with the printer’s size and design, the entire unit measures exactly 14.8 inches long by 13.7 inches wide by 9.4 inches tall when having all of its parts completely closed.

Contrarily to that, the printer measures exactly 14.8 inches long by 22.0 inches long by 10.5 inches tall when having both its printing tray and scanner’s protection lid completely opened.

The printer also features a substantial, yet compact and sleek design and the entire unit weighs exactly 13.2 lbs.

The Epson EcoTank ET-2760 basically works as a 3-in-1 device, allowing its users to not only print, but also copy and/or scan just about anything that fits into the printer’s scanning area.

As mentioned at the beginning of the article, this all-in-one printer also offers its users Cartridge-Free Printing thanks to its easy-to-fill supersized ink tanks, which work together with Epson’s proprietary EcoTank Ink Bottles. 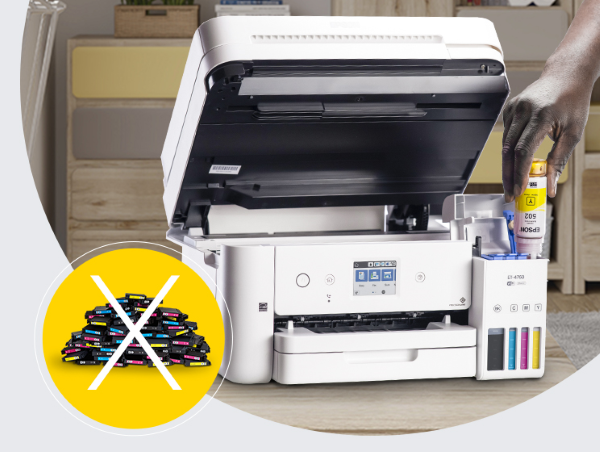 As mentioned earlier, these exclusive uniquely keyed and low-cost replaceable EcoTank EcoFit Ink Bottles not only make it easy for you to fill each of the printer’s different color tanks in a hassle free manner, but also ensure that you always have much less ink wastage when printing all of documents, which ultimately allows users to save up to 90 percent of their printing costs.

Basically, one set of replacement ink bottles is equivalent to about 80 individual cartridges, which can be translated to costing you about as little as 1 cent per color ISO page versus around 20 cents when using individual ink cartridges.

Furthermore, the Epson EcoTank ET-2760 Printer’s proprietary EcoTank EcoFit Ink Bottles also allow you to get up to 2 years of ink with each replacement ink set that you get.

Each replacement ink bottle set brings users an outstanding cutting-edge value and convenience usage, as each set includes enough ink to print up to 7,500 pages (when using black ink) or 6,000 pages (when using color ink), which, once again, is equivalent to more or less 80 individual cartridges. Not only does that mean that you have less waste when printing, but you’ll also have to do fewer trips to the store.

Within your package, the printer already comes with one replacement ink set included that consists of a total of four of its EcoTank EcoFit Ink Bottles. Each of these bottles features a Minimum Ink Droplet Size of exactly 3 droplet sizes, which means that it can be as small as just 3 picoliters.

Ultimately, the printer’s included four (x4) little bottles’ are more than enough for a family’s (or small business’s) printing needs, and will ultimately allow you to save up to $620 with just that single replacement set.

The printer’s simple, ultra-intuitive, and very easy-to-use interface consists of a single built-in high-quality 1.44″ color display that comes accompanied by its side-by-side Interactive Control Panel (located at the right side of the printer’s display screen).

The printer’s Control Panel is equipped with just a few buttons that allow users to easily control the printer’s operation. 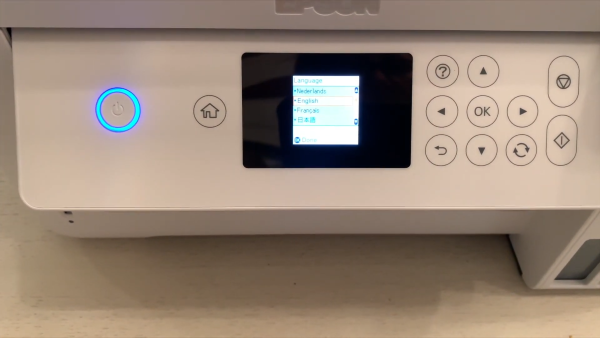 However, as mentioned earlier, thanks to the printer’s wireless connectivity option, users can also control the unit via its proprietary Smartphone Companion App (discussed right at the end of the article).

Sitting on the opposite side of the printer’s Control Panel (meaning on the left side of its built-in display screen), users can also find the printer’s dedicated Power Button as well as its Home Button (to return back to the Main Menu).

There’s also a memory card slot for PC-free printing, but the printer’s SD card is not included, as it is sold separately.

As mentioned above, the printer’s wireless connectivity settings – which includes Wi-Fi Direct 6 – allow users to ultimately fulfill all of their printing needs in an easy wireless fashion.

This includes controlling the printer either via a tablet and/or a Smartphone by using its Smartphone Companion App.

Inside each package, users will find: their Epson EcoTank ET-2760 All-in-One Printer and the printer’s included set of four (x4) EcoTank EcoFit Ink Bottles (which includes one (x1) bottle of 502 Black (127 mL), and three (x3) color bottles – one of each color – which are 502 Cyan, Magenta, and Yellow).

Users also get an included Power cord as well as the printer’s included User Manual.

This All-in-One Cartridge-Free Supertank Printer also offers its users several different Eco-Friendly Features. Not only is the printer rated as ENERGY STAR qualified, but it is also RoHS compliant.

Furthermore, the whole unit can have its entire hardware recycled via Epson’s very own Recycling Program, which ultimately makes this printer much more environmentally friendly than several other printer models from other brands available on the market.

Since the printer is also fully compatible with both Amazon Alexa and the Google Assistant, it also supports convenient and easy-to-use Voice Controls to deliver its users a more pleasant and completely hands-free experience. 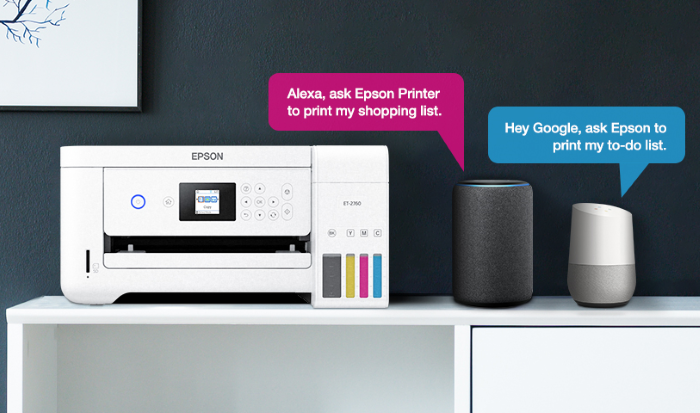 As such, you can easily rely on voice-activated printing to print a variety of projects and documents while you stay focused on other tasks.

As mentioned earlier, thanks to the printer’s wireless connectivity settings, users can also have the printer connected directly to their devices (Smartphones and/or tablets) by using its proprietary Smartphone Companion App, which is simply called the Epson iPrint App.

The Epson iPrint App is free to download for both iOS and Android devices, and with it, users can easily and very conveniently Print as well as Scan any documents without using the printer’s built-in Control Panel, meaning they can do it directly from their devices.

The App also allows users to share any documents with the printer directly from their Android phone or tablet, thus allowing them to print photos, emails, webpages and files like Microsoft Word documents, as well as Excel, PowerPoint and PDF documents.

Lastly, since the App also supports Box, Dropbox, Evernote 1, Google Drive and Microsoft OneDrive, the Epson iPrint App makes printing quite easy and convenient for all of its users, whether your printer is in the next room or across the entire office.

The Epson EcoTank ET-2760 is an All-In-One Cartridge-Free Supertank Printer that works as a 3-in-1 device for Printing, Copying and Scanning, while also supporting wireless connectivity and Voice Controls via Amazon Alexa or the Google Assistant.

Overall, this smart printer is a highly reliable model that empowers its users with several convenient, easy-to-use and quality-of-life life-changing features.

If you’re interested in buying it, each unit is currently going for $300, and also comes with a 2-year limited warranty (for the U.S. and Canada), but be aware that the unit’s second (2nd) warranty-year will require your printer to have its product registration already filled up.

You can order your Epson EcoTank ET-2760 Printer online right now, directly from Epson’s official shopping page, which you can access by clicking this link.

The EnviroKlenz Mobile UV Model is a mobile air purifier system that combines a high-end HEPA Filter with two germicidal UVC Lamps and an advanced chemistry technology to capture and destroy any fine airborne particles in the air. While its Medical-Grade HEPA Filter can accurately filter, capture and remove up to 99.97% of sub-micron particles from the air that are as small as up to 0.3 microns with a 99.99% efficiency, the system's built-in UVC lamps work in combination with its HEPA Filter by continuously shining a powerful ultraviolet germicidal radiation (UVC Light) on any of the airborne organisms that are collected by its HEPA Filter to effectively kill and destroy those same captured airborne particles. At the same time, the system's patented Earth Mineral Technology works to attack any surrounding VOC (Volatile Organic Compounds) that are present in the air, which then allows the system to break those down to a compound level. This is the main feature that sets this air purifier away from its competition, as it is a brand-new functionality that is not seen in any other air purifier models from other brands.
Read more
Home Gadgets

The Gantri Encore Table Light is a sleek, minimalist and ultra-modern smooth dimming lamp that's extremely energy efficient, and can also have both its light color and dimming easily adjusted to your preference.
Read more