Nowadays, most people find themselves under a lot of stress and pressure due to their busy daily routine and also due to their job(s). The worst part about this common issue is that all of that accumulated stress can ultimately end up preventing you from focusing at work. That also goes for those who regularly try to have a nice night of sleep just to prevent feeling tired at work, as  sleep deprivation is also something that can commonly lead to having your feeling lethargic and fatigued, as well as with lower alertness and concentration, especially when at work. Last but not least, even people that follow healthy lifestyles can also find themselves having problems with focusing at work every so often. Nevertheless, if you’re one of those busy and hard-working people and you’re looking for a better way to enhance your focus, then look no further. Meet the FOCI, a simple, super-effectice and easy to use Focus Wearable.

The FOCI is a cognitive biometrics wearable device that’s designed to capture your mind states through your breathing pattern, thus helping you to better understand yourself so that you can ultimately improve your focus.

Working based on its cutting-edge meditative biofeedback technology, this Focus Wearable device is designed to help you tune out any audio and visual distractions by providing you with real-time input of your current mind state, which can be visualized at any time via its Smartphone Companion App.

Via the App, users can measure every minute of focus, distraction, stress and fatigue. After measuring those biometric stats, the App itself also teaches you exactly how to self-regulate and control their own procrastination, as well as to fight fatigue and achieve sustained focus, all so that you can ultimately work your way into a deep, effortless and fully-focused work-flow. In addition to all of that, users can also review each minute of their cognitive states at the end of the day.

Now, let’s have a more detailed look at the FOCI and see exactly how this cognitive biometrics wearable device works and also see everything that it has to offer you.

The unit is in fact so small that it can actually fit very easily within the palm of your hand.

In addition to its compact size and ultra-portable design, the FOCI also features a very durable construction, as the unit’s whole body is made of a highly-durable ABS plastic.

Last but not least, since this Focus Wearable device is designed to be used while working seated for extra accuracy on capturing your breathing patterns, the unit also comes equipped with a highly-durable Stainless Steel clip that’s directly integrated onto the unit’s body. 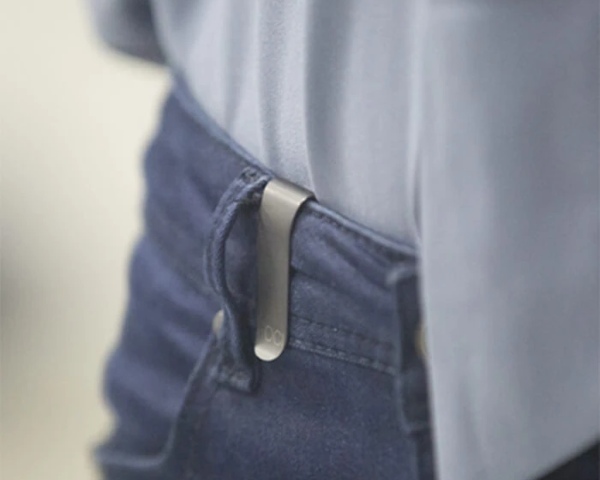 That not only allows you to easily and conveniently carry the device with you at all times by attaching it to your waist, but also allows you to accurately track your breathing patterns in a completely effortless manner.

Now, as mentioned earlier, the FOCI is a cognitive biometrics wearable device that’s designed to work together with its Smartphone Companion App, meaning that the device features Bluetooth 4.0 Connectivity to establish its wireless connection with its App.

On a side note, I’d also like to point out that this device only features compatibility with any iOS devices that are running on iOS 9 or above (for iPhones – iPhone 5 or above), as well as with any Android devices running on OS 8.1 or later, so keep that in mind.

Now, since this Focus Wearable is designed with portability in mind, the unit also comes equipped with a built-in rechargeable Lithium-Ion Battery that can offer you around 1 week of battery life (under normal usage with its App – meaning only if you’re not checking out its functionalities every 10~15 minutes).

Now, as mentioned before, the FOCI is a cognitive biometrics wearable device that’s designed to be used while working seated by having it clipped to your waist thanks to its Stainless Steel clip, which basically allows the unit to accurately capture your mind states / cognitive states through your breathing pattern, which can then be visualized in real-time to help you to better understand yourself so that you can ultimately improve your focus. 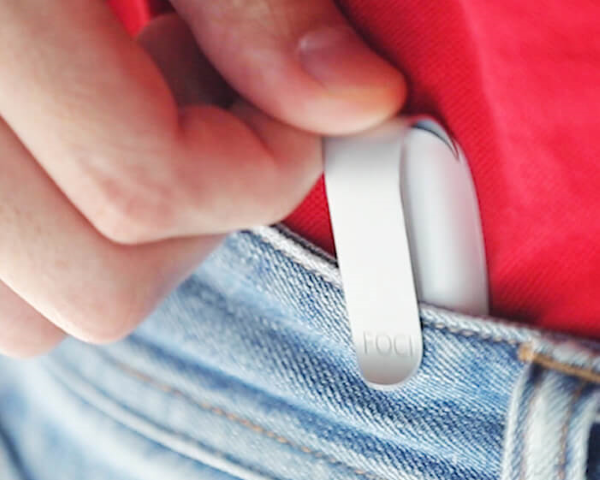 Those same real-time visualizations (which can be checked via the App) are specifically provided to help you tune out any potential audio and visual distractions, as well as to teach you how to self-regulate and control your own procrastination, fight fatigue and achieve sustained focus, all so that you can ultimately work your way into a deep, effortless flow.

Working based on its cutting-edge meditative biofeedback technology, this Focus Wearable device is designed to be used by a single user (meaning 1 device per each person), and the unit can provide accurate readings after at least 4 hours of learning about your metrics by simply measuring each and every minute of focus, distraction, stress and fatigue, and all of those metrics can be checked via its Smartphone Companion App, which we’ll discuss right ahead.

The device’s Smartphone Companion App, called the FOCI App, is available to download for free for both iOS and Android devices.

The FOCI App itself is where users are provided accurate input of their measured biometric stats, including focus, distraction, stress and fatigue, as well as their current mind state, which can all be visualized in real-time and at any time within the App.

The App’s main menu features a level of Focus Depth that’s displayed in a percentage (%) value, which can ultimately be followed regularly and trained via the App’s focus biofeedback and relaxation biofeedback, which will ultimately allow users to learn on how to better control their attention as well as to refresh their body and mind from fatigue and stress.

Basically, the App utilizes a stream of colored orbs to represent each different mind state, with a total of 6 Mind States currently available, thus helping you to better see your current mind state so that you can better understand what’s going on with yourself and your current focus levels. As such, whenever you lose focus, the App’s currently displayed “Mind Orb” will switch its color right away.

These different mind states that are displayed via a stream of colored “Mind Orbs” are all organized and listed in something called “Emotion Records”, which allows you to get to know every moment of focus, calm, distraction, stress, and fatigue while you work, and thanks to this organized timeline, you can ultimately find out when and why you lost your focus.

Not only that, but users can also check out their own “Gain Productivity Reports” to track their work sessions and to view detailed productivity stats on their work patterns, all so they can better understand how they focus.

Furthermore, users can also review each minute of their cognitive states at the end of the day.

In addition to that, the FOCI App also offers you access both to a revolutionary attention tuner functionality as well as to a breath pacer feature, which you can use to see and hear if you are doing well on increasing your focus level, and if not, users can quickly have the App’s immersive biofeedback music to subtly guide their breathing pattern so that they can ultimately stay in a deep focus for longer periods of time, which, as we all know, is something that’s highly necessary for most jobs.

Last but not least, you can also set the App to send you Distraction Alerts which can ultimately be used to cut-off and avoid any short distractions, with timely nudges. Users are also able to customize five types of distraction vibrations for these Distraction Alerts, which are all great in their own way to stay better focused and on track during work.

Inside each package, users will find: your FOCI Wearable device, an included USB Charging Cable (used to recharge the unit’s battery), and a Deep Focus Training Manual.

The FOCI is a cognitive biometrics wearable device that’s designed to capture your mind states through your breathing pattern, thus helping you to better understand yourself so that you can ultimately improve your focus.

Overall, this Focus Wearable can do a great job on keeping track of all of the main biometrics that are responsible for your focus, including tracking any distractions as well as measuring both stress and fatigue.

If you’re interested in buying it, each unit is currently discounted from its normal price of $120, now going for just $89.00 each. You can order yours online right now, directly from the company’s official shopping page, which you can access via this link.

The Second Hand: Why Is It Useful?

The second hand on your watch may be more important than you think. Check out this article to learn about watch hacking and how the second hand is used for this.
Read more
Sports Gadgets

The COROS VERTIX is an ultra-durable GPS Adventure Watch that features a revolutionary touchscreen, a 150-meter Waterproof Rating, an ultra-bright backlight, a long battery life, and many smart Tracking features, including a smart 24/7 Blood Oxygen Monitoring function, a Track Mode for running, and a Training Mode for accurately measuring any workout activity that you're looking to do. Overall, this is a very sturdy GPS Adventure Watch that comes packed with a tone of smart tracking features and a cool smart Training Mode that can be used via the Coros App, thus making the VERTIX  the perfect adventure-ready timepiece for those who prefer to train and workout while exploring the outdoors.
Read more
Wearables

The POLAR SEAL GEMM is a compact, portable and ultra-versatile wearable cooling and heating device that utilizes a unique thermoelectric technology to bring you instant cooling or heating feeling at the touch of a button. By wearing this innovative wearable gadget, you can easily stay at a constant temperature at all times, and that's all thanks to the GEMM's cooling and heating functionalities, which can cool you down or warm you up within mere seconds. To put it simply, wearing the POLAR SEAL GEMM ultimately allows you to stay at a comfortable body temperature and feel well throughout the whole day.
Read more
Media Gadgets