If you’re passionate about cooking and you’ve been looking to take your kitchen game to the next level, then you should definitely consider getting yourself a kitchen mixer (or potentially even consider upgrading from your old mixer). Basically, kitchen mixers are awesome and very versatile kitchen gadgets that allow you to create high-quality dishes of all types. To put it simply, a kitchen mixer allows for any passionate home-chef to chase new culinary creations by utilizing doughs, batters, and mixes, ultimately allowing you to easily make cookies, bread, cakes, and even your very own home-made pasta. So, if you’ve been looking for a reliable kitchen mixer to go with, then look no further. Meet the KitchenAid Artisan Series 5 Quart Tilt-Head Stand Mixer.

The KitchenAid Artisan Series 5 Quart Tilt-Head Stand Mixer can knead, mix and whip without breaking a sweat, all while featuring a 5-Qt. capacity and a 10-Speed Slide Control that lets you set it from a very fast whip to a very slow stir.

First and foremost, this high-end kitchen mixer is very durable, as well as powerful enough for nearly any task or recipe, and that goes for whether you’re stirring wet and dry ingredients together, kneading bread dough or even whipping cream. In addition to that, this sleek kitchen mixer also includes a few attachments (like a Coated Flat Beater, a Coated Dough Hook, a 6-Wire Whip, and a 1-Piece Pouring Shield) that make it extremely versatile for different culinary purposes.

Best of all, if you’re looking to use it for even more tasks, then you won’t be disappointed, as the kitchen mixer’s built-in power hub can ultimately turn the mixer into an all-round culinary center, as its power hub supports more than 10 optional attachments (which are sold separately) that allow you to make everything, from fresh pasta to burgers, veggie noodles, ice cream and more.

So, let’s have a more detailed look at the KitchenAid Artisan Series 5 Quart Tilt-Head Stand Mixer and check out everything that this ultra-versatile kitchen mixer has to offer you.

Starting with its size, the KitchenAid Artisan Series 5 Quart Tilt-Head Stand Mixer 14.3 inches long by 9.3 inches wide by 14 inches tall, and the kitchen mixer also has some weight to it, weighing exactly 26 lbs., which ultimately ensures that it can easily stay in place during use, even when using it to mix tougher doughs.

Regarding the mixer’s design, this kitchen mixer features a simple, attractive, and somewhat retro design that makes it aesthetically pleasing to look at, coming with a sleek rounded body and a very smooth surface. All and all, the mixer’s ultra-minimalist and retro design allows it to blend in very well with your kitchen counter as well as with the rest of your kitchen appliances.

In addition to that, this kitchen mixer is also built-to-last, as it features a highly-durable metal construction.

Now, as mentioned earlier, this kitchen mixer features a 5 Quart Capacity, as it comes together with a 5 Quart Stainless Steel Bowl that can be used to mix up to 9 dozen cookies or 4 loaves of bread in a single batch. 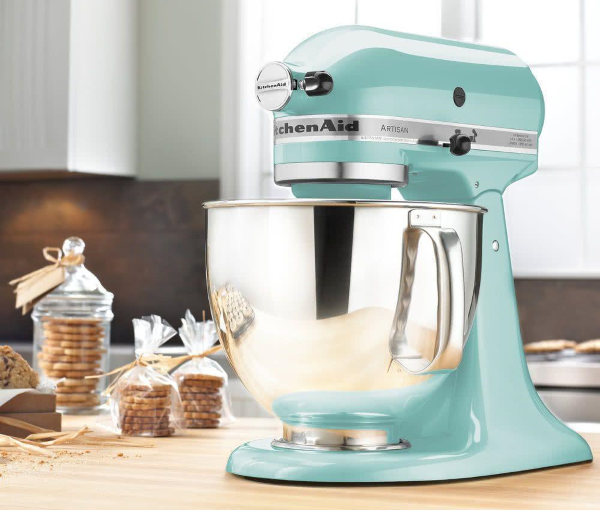 The kitchen mixer’s 5 Quart Stainless Steel Bowl also comes equipped with a large and durable handle that’s fairly comfortable to hold, and the bowl itself is also dishwasher-safe. 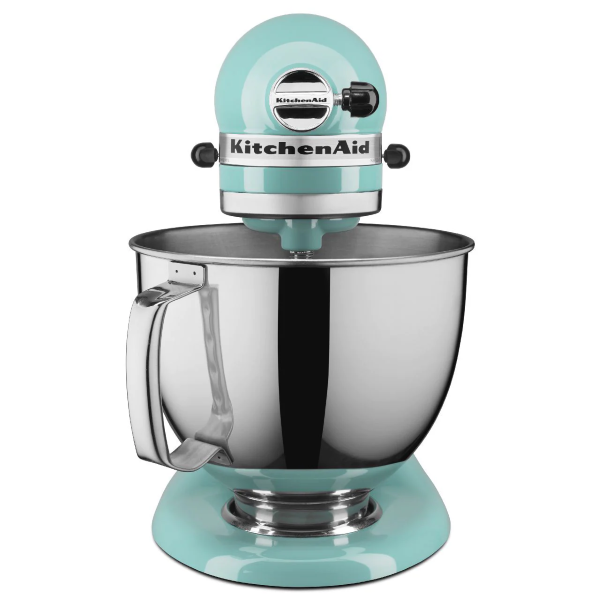 Additionally, the mixer’s bowl itself also features a total of 59 touchpoints per rotation, which basically help to ensure that you get a more thorough ingredient incorporation so that you are always able to get the best possible mixing results.

On top of that, this particular kitchen mixer also features a unique and very versatile Tilt-Head Design that allows you to tilt its head upwards (as well as downwards), and that ultimately gives you much better access to its mixing bowl when adding ingredients or attaching your preferred accessory. 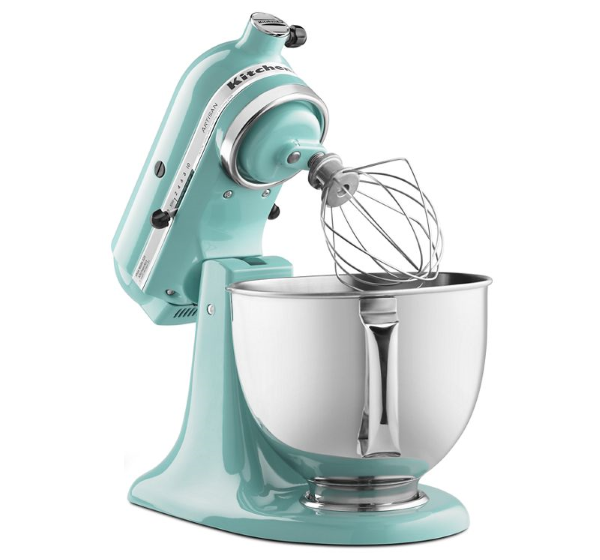 Moreover, the mixer’s Tilt-Head Design also integrates a Locking-Mechanism that also allows you to lock the mixer’s head in place while mixing, which is great if you want to make sure that no kitchen disasters happen. On that note, the mixer’s locking mechanism can be set between one of two positions – you can either have the mixer’s head locked down in place, or alternatively, have it unlocked / loose freely.

That said, for any time that you’re looking to have the kitchen mixer mixing up denser doughs, it’s probably best to lock-down its head in place just to keep it from bouncing. Contrarily to that, if you’re just looking to whip or mix cake batter (which tends to be looser and smoother), the mixer’s head probably doesn’t need to be locked down.

Now, as mentioned before, this kitchen mixer also comes equipped with a 10-Speed Slide Control that lets you set it from a very fast whip to a very slow stir. 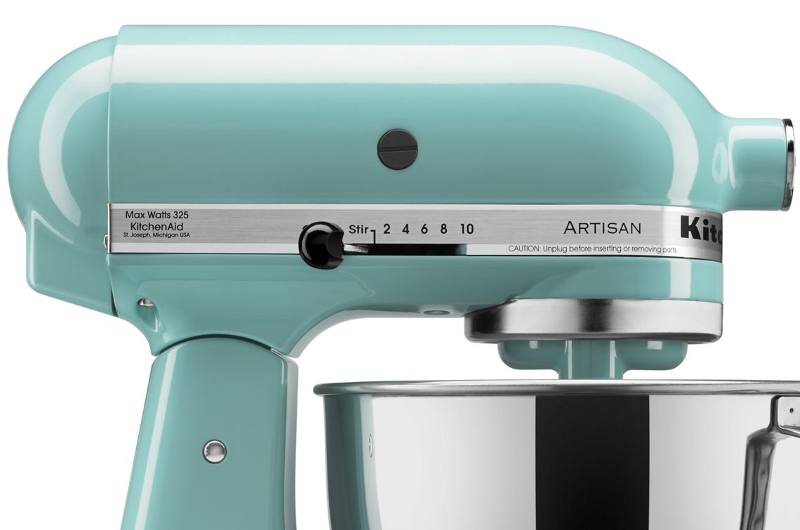 That said, by using its built-in 10-Speed Slide Control that’s found at the side of the mixer, you can easily and very conveniently change the mixer’s speed at any given moment to have it either  to gently knead, thoroughly mix and whip

As said before, this sleek kitchen mixer comes together with a few attachments that can be used as accessories, which include: a Coated Flat Beater, a Coated Dough Hook, a 6-Wire Whip and a 1-Piece Pouring Shield. 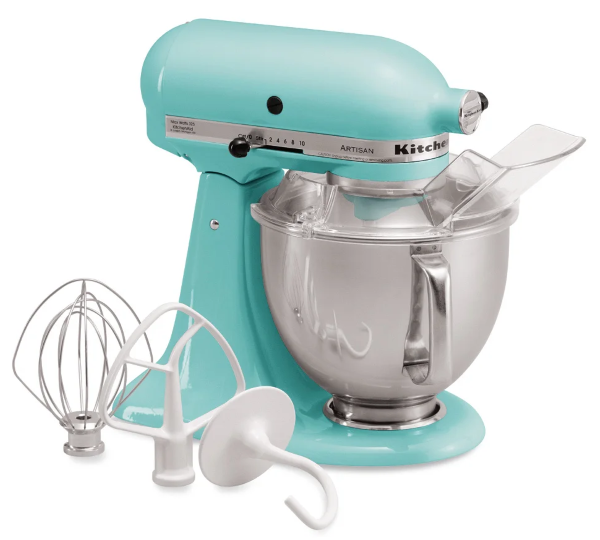 For mixing, the mixer’s Coated Flat Beater is perfect for mixing ingredients without adding too much air, while its included 6-Wire Whip is best for whenever you want to beat some extra air into your mixture of choice.

Last but not least, this sleek kitchen mixer also comes with its very own 1-Piece Pouring Shield, which makes it easy for you to add ingredients into the mixer while it’s still running, and its Pouring Shield also works great as a dedicated splatter guard that ultimately allows you to keep flour or loose liquids from flying out of the mixer while using it for different culinary purposes. 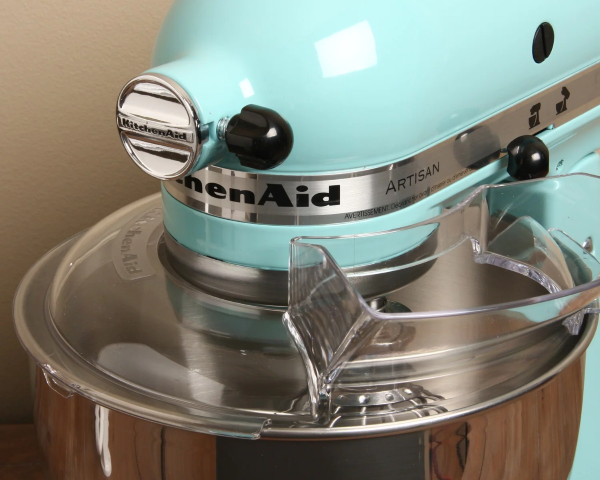 All of the mixer’s included accessories are dishwasher safe, excluding its 6-Wire Whip. Still, hand-washing its Wire Whip is still a quick, simple and fairly easy task.

What’s even better about the KitchenAid Artisan Series 5 Quart Tilt-Head Stand Mixer is that this kitchen mixer can also be upgraded with over 10 optional attachments (which are sold separately) that are all compatible with its built-in power hub, which can be easily swapped and used at different times to turn the mixer into an all-round culinary center. 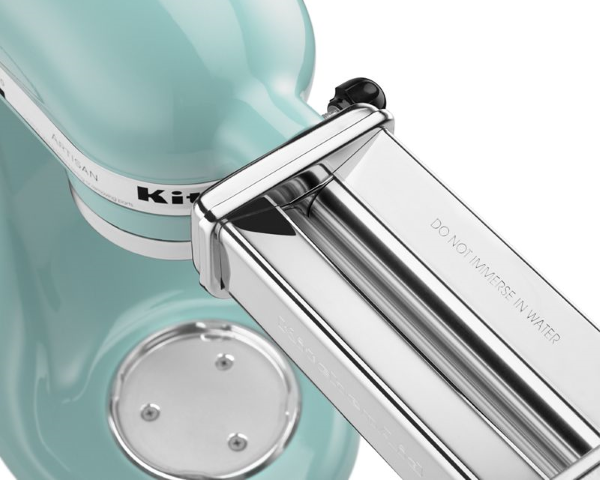 In other words, these extra accessories include attachments such as the company’s Pasta Roller for their KitchenAid Stand Mixers, as well as many other attachments, which can all be used with the kitchen mixer to make just about any culinary creation, from fresh pasta to burgers, veggie noodles, ice cream and more.

The KitchenAid Artisan Series 5 Quart Tilt-Head Stand Mixer can knead, mix and whip without breaking a sweat, all while featuring a 5-Qt. capacity and a 10-Speed Slide Control that lets you set it from a very fast whip to a very slow stir.

Coming with a few accessories already included like a Coated Flat Beater, a Coated Dough Hook, a 6-Wire Whip, and a 1-Piece Pouring Shield, and also giving you the option of upgrading it with even more accessories that are all compatible with the mixer’s built-in power hub (which are sold separately), this kitchen mixer can do it all, and it’s also safe to say that it simply does not disappoint.

What’s even cooler is that this is mixer comes in a huge array of color models (which so far account for nearly 50, to be precise) and special color editions are sometimes released too, which just gives you even more color-options to choose from. 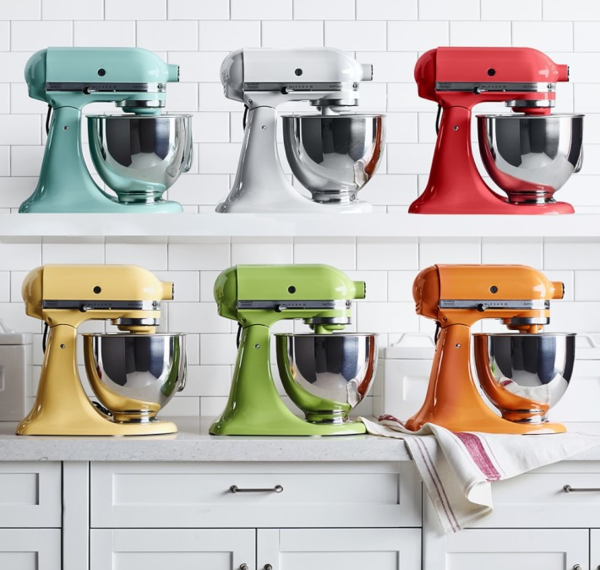 If you’re interested in buying it, each unit is currently going for $429.99. You can order yours online right now, directly from KitchenAid’s official shopping page, which you can access by clicking here.