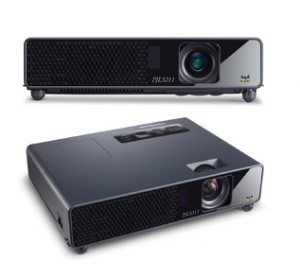 With the U.S dollar falling below acceptable levels and consumer spending doing the same on consumer electronics, the educational segment is becoming hot for a lot of IT-related manufacturers. And that’s exactly the case with ViewSonic, which has expanded their lineup of short-throw projectors with three new models, the PJD5351, PJD5111 and PJL3211 models.  All three provide extensive multimedia capabilities, as well as a fairly large level of portability.

The most advanced model of these is the ViewSonic PJL3211, a digital multimedia short-throw projector designed for portability and performance in home, classroom, and small office settings.  The projector features a brightness output of 2500 lumens and a 500:1 contrast ratio for bright projection in a variety of lighting types.

It has 1024 x 768 XGA native resolution, 1.2x optical zoom, and is capable of displaying both 4:3 and 16:9 aspect ratios.  It also features a short throw lens which allows it to project large images from less than 5 feet away.

The Viewsonic PJL3211 is designed with a built-in, self-contained 1-watt speaker for accompanying sound and at only 4.1 pounds it is portable enough for travelling.  It has a lamp life of up to 3000 hours and supports a variety of input signals including 720p and 1080i for high definition projection.  The projector offers compatibility with a variety of interfaces including composite, S-Video, component, and RGB connectivity and has a USB port for projection without the need for a PC.  The PJL3211 comes with a remote control and a 3 year limited warranty.

Plus, the Viewsonic PJL3211 adds a six-picture mode for the display of high-quality images in the dark, daylight or onto a white or blackboard. Additionally, the PJL3211 has a very short-throw ratio, of just 1.3, which helps in reducing shadowing effects and bright light that could reduce picture quality.

The Viewsonic PJL3211 is a lot of projector for the money. Even though it is marketed as an educational projector, it could easily pass for a high-end home theater device. It’s contrast and resolution really blast out the image quality, and there are basic audio outputs for setting up your hi-fi components.

The PupPod Rocker with Feeder is a 2-piece App-enabled enrichment puzzle toy system for dogs that provides dog owners with a powerful tool to encourage their dogs to stay active and healthy.
Read more

The Koble Zain Smart Side Table is a minimalist and ultra-modern smart table that features Wireless Charging while also coming equipped with built-in Bluetooth speakers and a 40W subwoofer.
Read more

The Hottest Mobile Trends in The Mobile Gambling World

The Galaxy S Duos looks to be Samsung's latest flagship handset.  As the name suggests, it has space for two SIM cards.  The phone will be...
Read more
Media Gadgets

Jawbone has been in the Bluetooth headset business for sometime.  Now the company has unveiled their first speaker, the Jambox.  It connects to any...
Read more
Smartphones