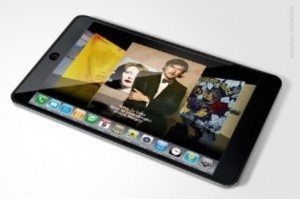 Apple has confirmed that their upcoming tablet display will size at 7″.  That ‘s about the size of the device itself, considering the screen takes up nearly the entire real estate of the device.  What we don’t know is its debut date. However, the Financial Times reported that Apple has reserved Yerba Buena Center for the Arts in San Francisco for several days in late January, the 26th to be exact.

The New York Times reported additional rumors, whose sources were current and former Apple employees, that since Apple has been working on the tablet for some time now, technology derived from the product was used in other devices and the development of tablet continued to progress, no doubt helped along by the re-hiring of Michael Tchao who worked on the ill-fated Apple Newton.

According to a senior Apple employee, the current tablet has hit the sweet spot and Steve Jobs “is extremely happy with the new tablet”. Adding mystery and intrigue to the rumor, another Apple employee, recently departed from the company, says “you will be very surprised how you interact with the new tablet”. This is causing quite a media stir, with many theories as to what type of navigation the Tablet will institute. I’m guessing that it will blend multi-touch and gesture-based control technology into the mix, and come January 26th, the unveiling will be sure to introduce some marvel of design and ingenuity.