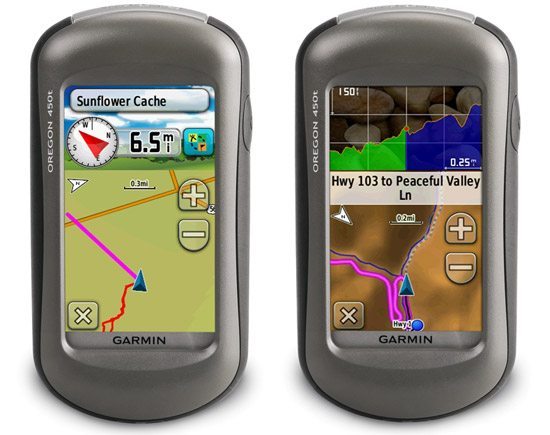 You’ve still got the photo navigation and the 3-axis tilt-compensated electronic compass, which is a must if you’re lost in the wilderness. Of course Garmin Oregon 450 and 450t does feature a barometric altimeter, the necessary software for easier geocaching, and wireless exchange of tracks, waypoints, routes and geocaches.

Both Garmin Oregon 450 and 450t come with a worldwide shaded relief basemap, but the Garmin 450t adds a preloaded 100K topographic maps for the U.S., including 3D elevation perspective.

Garmins 450 & 450T weigh 6.8 ounces, and can last up to 16 hours on two AA batteries. They feature a GPS receiver with HotFix which kinda mimics A-GPS technology. They come with 850 MB of internal memory and a microSD card slot for photos and other optional map data.