Andrea Electronics recently came out with their SuperBeam earphone line, comprised of a couple of “Boom Free” microphone noise cancellation new gadgets, one an earbud and one a computer headset, both which showcase Andrea’s Array Microphone, HD audio reproduction and 3D audio recording.

The portable headphone market is blistering with popularity due to various media services and devices (YouTube, iTunes, Skype, chat) that require headphones.  This is true for both personal media and business applications. The Andrea SuperBeam line are earphones that works like headsets. Providing easy convenience, these new gadgets eliminate the need to constantly manually position the boom microphone for proper close talking operation.  The mic is built-in, and it works well. 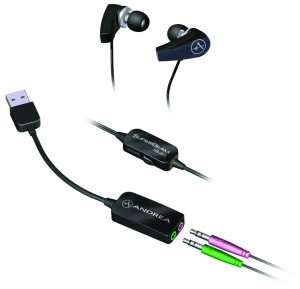 Because the SuperBeams have no mic boom, you can actually multi-task….like have a little snack while you’re talking.  The mics on these babies have exceptional sound quality, making communications and multimedia applications easy to use. 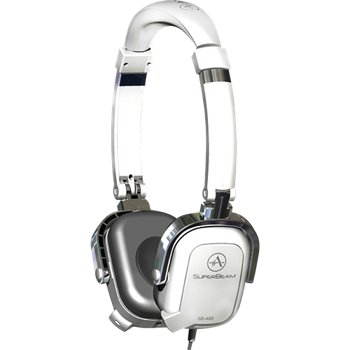 The headset cable is terminated with standard 3.5mm audio plugs for connection to the SuperBeam systems’ PureAudio USB audio adapter.  It’s designed for use with computers or any portable media device, such as an iPod, for basic audio listening.

The dual microphone array works with Andrea’s patented Adaptive Beam Forming technology to focus on the user’s voice while cancelling background noise for unprecedented intelligibility when making VoIP calls, video chatting, multiplayer gaming or using speech recognition software. SuperBeam(TM) headsets can also be used to make stereo 3D surround recordings and are available in two models, SuperBeam(TM) Buds (earbuds) and SuperBeam(TM) Phones (on-ear headphones), which come in black or white and retail for $129.95 and $149.95, respectively. To use your SuperBeam headset on your smart phone, Andrea offers a Mobile Adapter cable ($9.95). SuperBeam headsets are now available online at shop.andreaelectronics.com and coming soon to Adorama, DataVision, J&R, BestBuy.com and TigerDirect.com.

With full frequency response (20Hz-20kHz) miniature microphones integrated into each earpiece, SuperBeam(TM) Headsets provide a better user experience and performance than traditional single element boom mics, which can produce inconsistent sound when improperly placed. This boom-free design looks more natural during video conferencing use and performs especially well in noisy environments like an office, coffee shops or when travelling.

Technically called binaural recording, SuperBeam(TM) headsets capture sound in the same phase and time as your own two ears, creating lifelike recordings and playback that is truly three dimensional. 3D surround recordings make YouTube videos that much more engaging, and recording GarageBand tracks give listeners the feeling that they are in the same room as the musician. Home movie soundtracks will never be the same!

“Earbuds and headphones have become an essential part of our everyday life, and the role they play in computing is shifting with the introduction of our SuperBeam(TM) family,” said Douglas Andrea, president of Andrea Electronics Corporation. “With the growth of VoIP calling, video creation, multiplayer gaming and voice recognition software, listening is only half the equation. With a growing need to communicate over the various applications of our lives, we feel the ability to capture your voice without background noise distractions will soon become a computing essential.”

SuperBeam(TM) headsets are the latest innovation from Andrea Electronics, an American-owned business since 1934. In the early 50’s, Andrea was among the very first elite U.S. television manufacturers. In the 60’s the company designed the capsule’s intercom communication system used in the first manned Mercury space flight and military intercoms for F16 fighter jets and helicopters. In 1998 Andrea pioneered microphone array technology, which has become a standard for hands free VoIP communication embedding its advanced noise cancellation technology into millions of computers being produced by global manufacturers such as Dell and HP.

The HYDAWAY Collapsible Drink Tumbler is a portable insulated drink tumbler that can be used to store both hot or cold beverages so that you can enjoy your favorite drink, at any time and anywhere. Featuring a fully-collapsible body that can be squeezed all the way to just 1-inch thick whenever you're not using it, a rigid and completely plastic-free construction, and a generous maximum capacity of 16 fluid ounces, this portable insulated drink tumbler is perfect for any Eco-concious person that not only spends a lot of time on-the-go, but also regularly wants to have a sip of their favorite beverage throughout their daily routine.
Read more
Miscellaneous Gadgets

The Ampere 65W USB-C GaN PD Adapter is a compact and versatile USB-C PD Travel Adapter that's powered by GaN Technology, which makes it cooler, more efficient and more powerful than traditional universal chargers. With it, you can have an ultra-portable Universal USB PD Adapter with you while you're on-the-go that ultimately allows you to quickly recharge the battery on just about any USB-C-enabled device that you can think of.
Read more
Media Gadgets

The JLab Talk USB Microphone is a plug-and-play high-performance desktop microphone designed for audio flawless recordings and podcasts, even while you're on-the-go, featuring 3 studio-quality Condensers and a studio-quality resolution of 96kHz/24BIT with 4 different Directional Pattern Modes. Overall, this high-performance desktop microphone can deliver you a great dynamic sound range for everyday use, making it perfect for use at home, in the office, or even outdoors. With it, you can ensure that all of your audio recordings come out with all the sound details accurately captured to ultimately have them sounding crystal-clear as an end result. All and all, this is a fairly capable USB microphone, and no matter what type of activity you need it for, you can be sure that this mic does not disappoint!
Read more