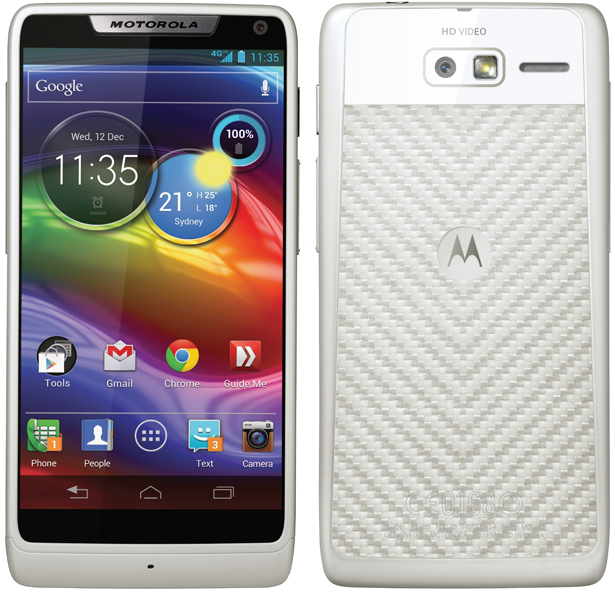 Not too long ago Motorola made a big deal about a ‘new Motorola’; a refocusing of the company after its being acquired by Google. Aside from primarily serving as a showcase for the most recent smartphone offerings, ‘new’ information about Motorola was scarce. In this context the Droid RAZR M for Verizon Wireless served as the highlight. This device takes its place as both a mid-range device as well as the veritable heir to the high-line Droid RAZR. The M edition has hardware and processor improvements and a contract price of $99.99.

Out of the Box

It likely says something that Motorola introduced the M at it’s relaunch, and at the same time there’s not much to see of the new vision of Motorola in the M model which is essentially a fine-tuning of the manufacturer flag-bearer. That said, the first edition RAZR is a strong phone and given that Motorola would doubtless address some of the original’s failings (display and battery) the potential for a useful and powerful device is apparent. The price isn’t bad at all either.

The M edition did not undergo a design overhaul as the company has applied a design template since the release of the original RAZR. The edges are rounder which serves to soften the face of the device and leaves the device wanting in the style department. The new device is smaller than most devices in it’s class at 2.39 inches width, 4.82 inches height and 0.33 inches thickness making it only slightly larger than the iPhone 4S. The phone deviates from the trend of ever larger Android devices and is very comfortable in the palm of your hand and is therefore easier to use; which cannot be said for recent offerings by the leading Android manufacturers. That said, the device still features an ample 4.3 inch display. As there are practically no side bezels Motorola has characterized the display as an “edge-to-edge” display. It straddles the wolds of gaming and web browsing and to boot it can be easily operated in one hand without getting a hand cramp when using it’s features. 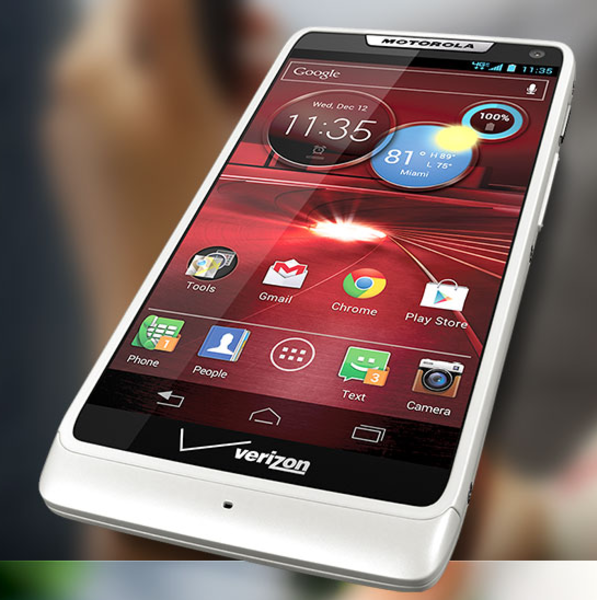 In regards to the hardware on the phone it is significantly more advanced than is characteristic for this price classification. The seals and construction have a solid feel without the flimsy plastic aesthetic of most offerings and the industrial look to the device give it a welcome robustness. The internal components share the nano-coating as previous models giving it a certain degree of water resistance. The rear has the same take-it-or-leave-it kevlar finish, the 8 megapixel camera is housed in a section at the top along with LE flash and an internal speaker. On the right side of the phone you find the volume and power/display key which is easily reached by your thumb as you hold the phone in your right hand. The left side of the phone has the Micro USB charging port and a door for the SIM and SD card slots underneath a flap.

The display itself features a Super AMOLED element with a resolution of 960 x 540 pixels. The M screen is exactly the same screen used on the RAZR though it features a more vivid color palette and viewing from sharper angle. A closer look reveals that isn’t quite as competitive when compared with 720p displays found on the market, however if you need state-of-the-art than there is the Droid RAZR HD which comes with a 4.7 inch high-definition screen.

The M comes with an 8 megapixel camera and LED flash with 1080 HD video. There are a number of features available however such as HDR and panorama function. These functions are fairly effective as far as smartphone function is concerned and exceed the capability of the average smartphone. The HDR is well suited to capturing images in high contrast and and the panorama function allows you to capture wide scenes via shot sequences that are then blended together. 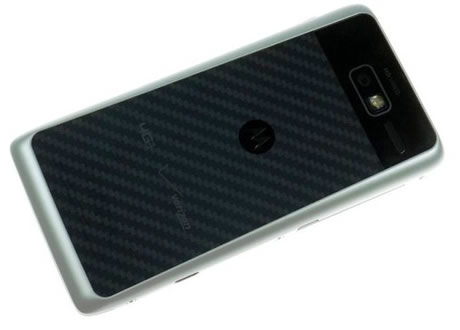 The application is powerful and sensitive and features tap-focus that is useful for taking a number of in-focus pictures successively. The shutter sound can be a bit annoying along with some other sounds that approximate a recharging flash. Of course, you can disable the sound by entering the app and shutting it off from there.

The image quality is decent enough for a middle-class device and as such indoor images are lacking while outdoor images are fairly impressive. The noise level of the images when viewed on a computer screen have a little too much noise for my taste, and the camera is just barely adequate when trying to compensate. The key when capturing 1080p video is to have enough ambient light, however if this is lacking frame rate suffers when this isn’t optimal. Video chat using the front facing camera is good enough featuring a vivid image and your face fits nicely within it’s bounds.

The device comes with Android 4.0 Ice Cream Sandwich and Motorola’s interface and has the feel of standard Android. There is only one screen set up and swiping enables you to add a blank page or preset options. There are no pop-up widgets and instead replaces these with quick access settings accessible to the left of the main home screen. Here you can select between Wi-Fi, ringtone, GPS, data and airplane modes, lock, Bluetooth, GPS and return to the main settings. The main disadvantage here is that these settings are not accessible while working within an application.

Motorola has included a fairly large amount of bloatware even if that is the status quo for Android devices. That said, Smart Actions is essentially a means to automate just about any function or feature set that you use often. Basic items like music, alarm and ringer settings are easily configured and settings can also bet set to react to location and movement of the device. You can use a preset or configure an app to suit your specific needs.

Of course, bloatware on Android typically means a number of shopping apps and redundant software that for some can be a nuisance. While you cannot remove these applications, you can however disable them using native tools on the operating system.

The M uses the 1.5GHz dual-core Qualcomm Snapdragon processor and 1GB of RAM; that is, the same processor you will find in a number of top-of-the-line phones like the Galaxy S III from samsung. This processor affords an efficient and fast performance profile, yet it comes up just short when compared with Android 4.1 Jelly Bean. With that in mind, it stacks up quite nicely when you consider the price tag of under 100 dollars.

The phone features excellent call quality on Verizon’s network and clear volume for both the speaker and ear. Data transfer on the network is also strong with speeds averaging around 15mps downstream and 10mps upstream. The battery is nothing to write home about as it gets about a solid day’s usage out of a charge when texting, browsing, taking photo’s, a call or two and other apps. For standard daily use the battery is adequate, however if you are looking for more demanding power, it’s not quite up to snuff.

A nice device that does what it should.

The Motorola Droid RAZR M is a good smartphone that features solid construction, efficient performance, satisfying data transfer, fits in one hand comfortably, clear display and priced for the middle class. Of it’s faults a better display resolution and camera wouldn’t hurt, but there is still tons about this phone that warrant at least a second look.

While the phone has the specs one is looking for, it doesn’t excite the soul the way other devices do. In fact it might even be considered lesser from a design standpoint that it predecessors from Motorola. It could use some refinement in it’s construction. Motorola makes better smart-phones, only not for Verizon.