Cats are amazing companions, bringing comfort in stressful times. But the litter box is a different story.  It smells, it’s always messy, and it’s a chore to clean. The Smart iKuddle Automatic Cat Litter Box solves all of your problems. The product was announced on Kickstarter just over a week ago, earning a staggering $851,000, blowing away their $30k goal.

So what makes the iKuddle “smart?”  Among many things, probably the most notable would be the self-cleaning system. To assure your four-legged friend’s safety, within 3 to 10 minutes of your cat exiting the litter box, a series of IR sensors will trigger the system, scooping the waste into a special, bag-lined compartment, and deploying a deodorant. No more smelly rooms in your house, ever again. 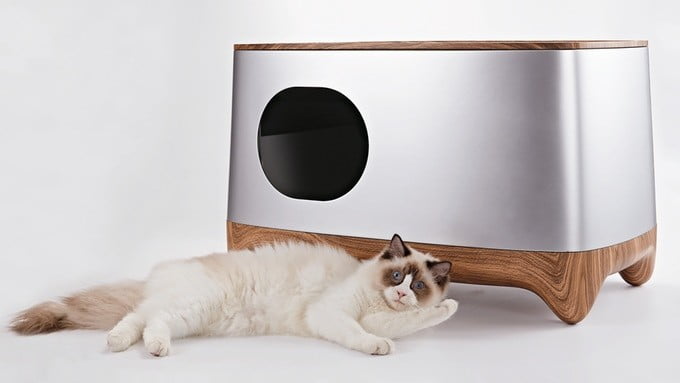 By opening the associated app and tapping a button, your iKuddle Automatic Cat Litter Box will pack the waste into the bag and lift it from the container. Then, you just need to toss it in the trash and replace the bag. For a single cat, you only need to pack its litter once a week.

The iKuddle also tracks how often your cat uses the litter box. This may seem strange, but in case your kitty is sick, this information can be essential for helping the vet understand any problems, since cats are also known for showing very little signs of illness.

The built-in Lithium Ion battery lasts an average of 15 days, but you can also plug in the iKuddle and not worry about recharging it. The estimated retail price is $399, but if you back the device before it’s launch date, you can save up to 25%.