Formula E racing series, the world’s first class of motorsport that only uses electric-powered cars, has finally revealed the electric racecar that will run in its new upcoming off-road sport, “Extreme E.” The new electric race car is named Odyssey 21. The all-electric SUV was introduced at the Goodwood Festival of Speed in the UK this past weekend, on Saturday, July 6. It also made some runs up the famous Goodwood hill, and while this is still just a prototype, this is already an extremely powerful vehicle. 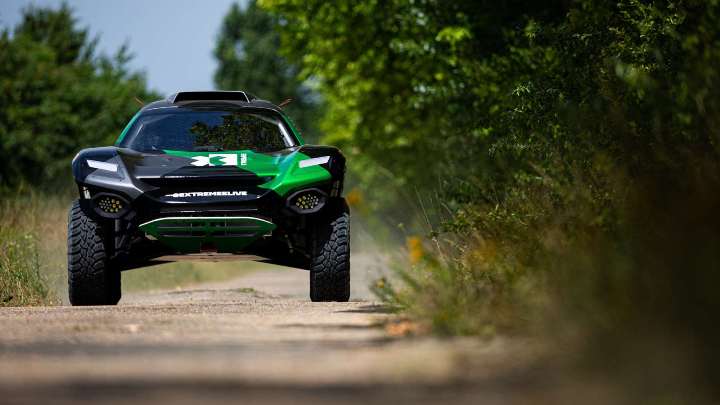 The Extreme E series will start testing the Odyssey 21 prototype’s racing skills this September, and French manufacturer Spark Racing Technology is planning to deliver 12 final versions of the electric-racing SUV by March 2020.

Extreme E’s first season will kick off in early 2021. Extreme E was created by Formula E founder Alejandro Agag, and the main goal of the series is to race in remote places with “fragile ecosystems” to “highlight the impact of climate change,” while also promoting electric vehicle technology. The Extreme E series is still figuring out how all that will happen, but they’ve already signed a multi-year broadcast deal with Fox Sports.

One thing is certain: if the final vehicles look anything like the Odyssey 21 prototype, Extreme E will be a racing series full of giant, bulky Electric Racing Vehicles that are also lightning fast.

The Slime Garage Inflation Station is an electric-powered 120V inflator that can be mounted onto your garage wall which is powerful enough to provide between 0 to 60 PSI of air pressure, all while also featuring an extra-long 20 ft. coil hose, a built-in Dial Display that's easy to read and conveniently shows the device's current PSI output, as well as an integrated Tire Sensor that safely detects when a tire is reaching its maximum air capacity, plus an included set of multi-purpose air adapter heads that can be attached to its air nozzle for inflating any other inflatables such as a ball or an inflatable item. All in all, this electric-powered 120V inflator provides you with a quick, easy, and convenient way to inflate your car's tires or any other inflatable item right from the comfort of your with just the push of a button. The device is easy to install and also very simple and straightforward to operate.
Read more
Car Gadget

The Logistimatics Car Charger GPS Tracker is a reliable 4G GPS car tracker and Dual-USB car charger powered by any standard vehicle power outlet that works based on the 4G cellular network, allowing vehicle owners to track their vehicles in real-time via its cloud-based Logistimatics App, which offers a Real-Time Tracking function via geofencing that provides regular locations updates on their vehicle's position every 400 meters when moving, a Historic Record Log function that accurately details the device's entire route from the moment their vehicle gets stolen, and also a Live Audio Monitoring function that can be enabled by simply calling the tracker's unique phone number, which ultimately allows vehicle owners to hear what’s happening inside their vehicle. All in all, this 4G-enabled GPS car tracker and Dual-USB car charger is ideal for tracking your family vehicle(s) at any time you require to do so (including both potential theft or even keeping an eye on whenever a family member uses your personal vehicle, especially when unrequested), as well as for keeping proper track of company vehicles and the employees that use them.
Read more
Car Gadget

The PAJ GPS POWER Finder 4G is a new-generation GPS Tracker which comes pre-installed with a M2M SIM card that features 4G LET-M Connectivity for 4G network access, between 40 to an incredible 90 days of battery life, along with multiple vehicle-tracking functionalities such Live Tracking, Geozone Monitoring, and even a 365 Days' Route Information with details about your vehicle's Date and Time, Speed, and Location, as well as Real-Time Speed Tracking Alerts, Low-Battery Alerts, and also Motion Alerts and Drop Alerts. By using this new-generation 4G GPS tracker, vehicle owners are provided with all advantages of online tracking, including accurate live-tracking of their vehicle's location with worldwide coverage, along with 365 days of route information about their vehicle's past travels. All in all, the PAJ GPS POWER Finder 4G is an amazing GPS tracker for vehicles. Not only is it super-easy to install, but also very convenient and extremely versatile to use on a regular basis.
Read more
Car Gadget

The Snow Joe illum-n-Broom is an ultra-portable 4-in-1 tool for safe winter traveling equipped with an auto-locking telescoping pole that can be used as a snow broom, ice scraper, flashlight, and as an emergency blinker. With the illum-n-Broom, you can easily clear snow and ice from any car or truck, while its flashlight makes it possible for you to do that at any time of the day, no matter if it's daytime or nighttime. Best of all, its built-in Emergency Blinker functionality gives you a reliable emergency flasher that can help you signal yourself and your vehicle to other drivers during emergency situations where you need to be noticed. All in all, this revolutionary 4-in-1 winter tool is extremely convenient to have stored in your vehicle on any snow days, both before, during, and even shortly after the Winter season. With it, you can more easily keep your vehicle free from snow and ice at any time that's necessary.
Read more