“The one thing that unites all of us is the need for clean water.” But there’s one problem. While the water that we drink is tested at the source, that doesn’t necessarily mean that it will remain as clean water until it reaches us.

Until that water that began its way as clean, and safe to drink water reaches us, it has to travel through miles and miles of old pipes. So how can we know for sure that the water we drink, and that we also give to our kids is safe to drink? By using the Lishtot TestDrop Pro Water Tester, the successor of the first personal portable water tester equipped with water testing technology.

The Lishtot TestDrop Pro Water Tester helps you to test your water before you drink it, offering you peace of mind with every drop. The TestDrop Pro tests water for more than 20 contaminants in two seconds without even touching the water.

Users can do thousands of tests for Heavy Metals (including lead, copper, arsenic, cadmium, and more), test for Pathogenic Bacteria (such as E.coli (coliform Escherichia bacterium) by detecting the proteins they release in the water), and test for Organic Chemicals (like PFAS (polyfluoroalkyl substances) such as PFOS (Perfluorooctanesulfonic acid), PFOA (Perfluorooctanoic acid), and pesticides). Users can do all these tests with no additional cost, and the Lishtot TestDrop Pro runs on a single watch battery, which has a long life span. The device uses a standard 2032 Energizer battery which lasts for 5000 tests.

The Lishtot TestDrop Pro Water Tester features Innovative Technology with 3 granted US patents. The device has already been tested by independent third-party labs, making it validated by those labs, as well as by many other people and companies.

Basically, the way TestDrop Pro works is you aim it at a plastic disposable cup filled with some water that you want to test, press a button, and the built-in LED light will light up. If you get a Blue light it means that the TestDrop Pro didn’t detect contamination – the embedded algorithm is programmed to show Blue when the sensor detects uncontaminated water. 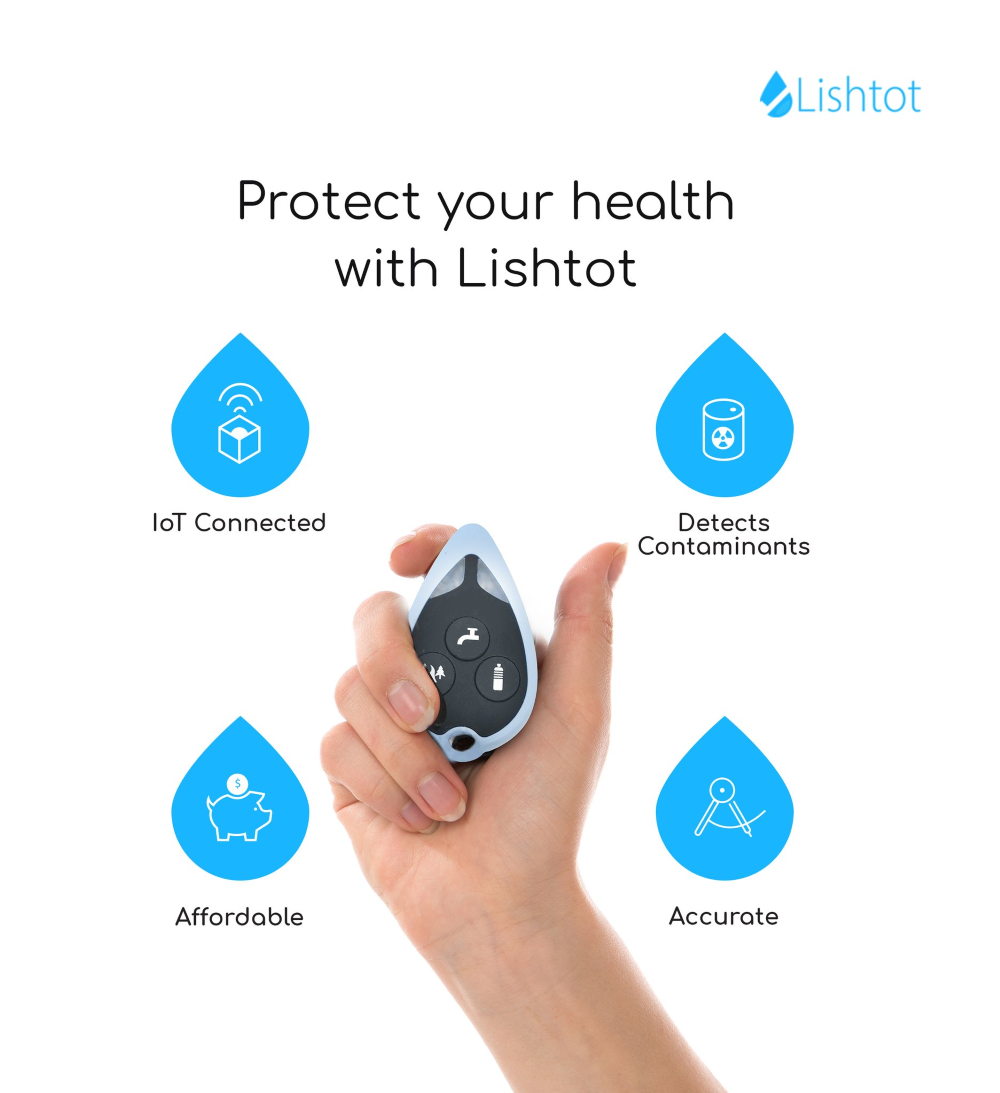 However, if you get a Red light, than it means that the TestDrop Pro found contamination in the tested water – it is not recommended to drink water that generated a Red light on the TestDrop Pro. Its three featured buttons offer three different testing levels. Each button is programmed to show Blue at a different level of water purity.

The TestDrop Pro does not transmit any signal, allowing for Passive Water Testing. This basically means that the device senses the electric field created by the interaction between the water and the cup.

With the Lishtot TestDrop Pro Water Tester, users can test water in any plastic disposable cup, even in non-transparent cups – your disposable plastic cup does not have to be transparent. This means that you can use PP, PET or PS clean, new, disposable cups for testing your water, and as said before, you’ll get immediate results – usually within two seconds. Thanks to its Passive Water Testing capability, you’re even able to test bottled water without opening it. Keep in mind that you should not use the Lishtot TestDrop Pro Water Tester with glass containers, because glass cups are thicker than plastic. Also, when you wash your dishes, the soap leaves residue which is detected as contamination. 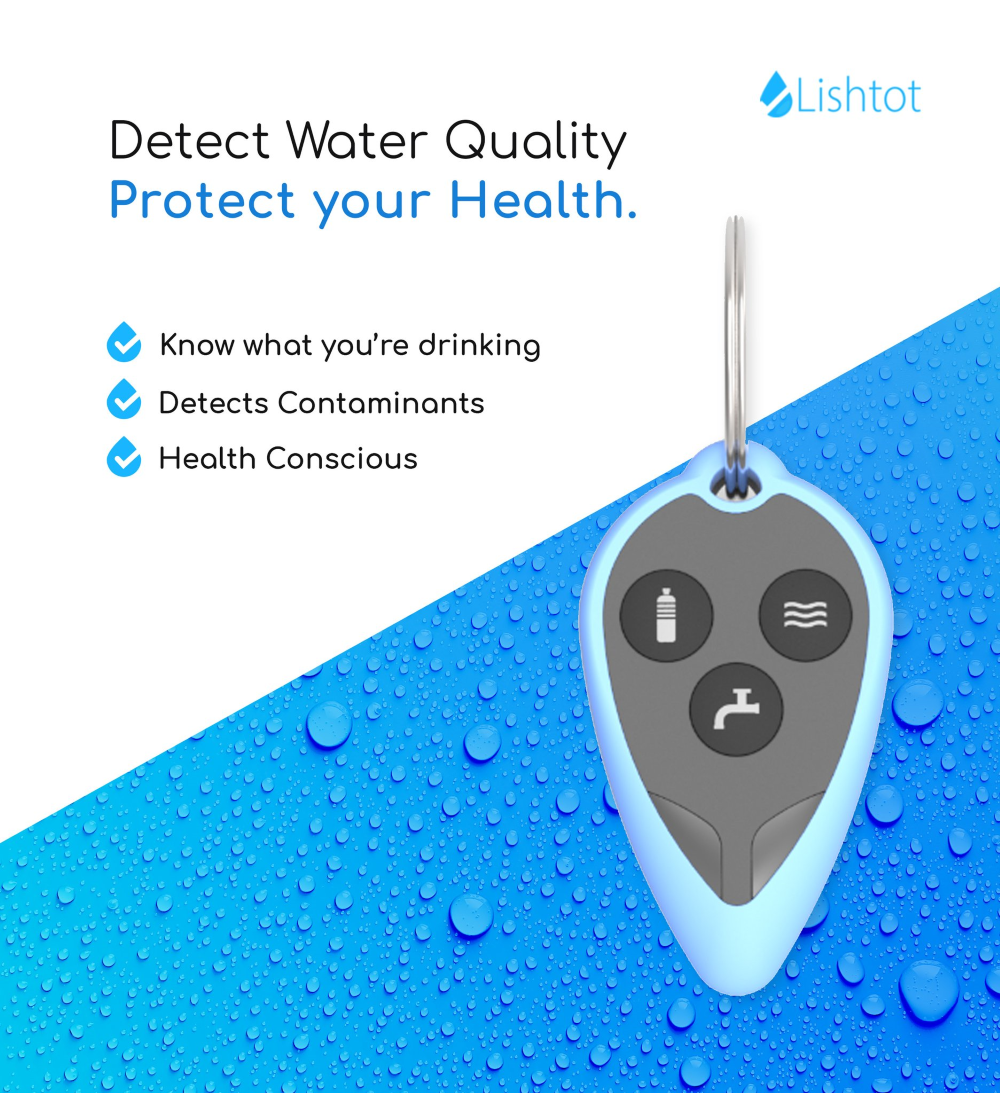 Lastly, by using the Lishtot App (which is still in its Beta stage), users can get their water score and historical data about the water they tested.

The TestDrop Pro is an essential tool for testing water. While many people buy filters and bottled water because they don’t know the quality of their water you can use the TestDrop Pro. With the TestDrop Pro, you can routinely test all the faucets in your home so you can make informed decisions based on real-time water quality data.

Its key-chain size makes it portable, meaning you can take it with you, wherever you go. Since the device is extremely easy to use, anyone can become an expert water tester, getting immediate results for their tested water in just two seconds.

The Lishtot TestDrop Pro is currently going for $50.  If you’re looking to get one, you can find it at Lishtot’s official website, by clicking here.

Mason Man Skincare is a high-quality and trustworthy brand of premium facial skincare products for men that are mainly focused on bringing dudes an effortless and efficient daily skincare routine to keep their facial skin looking fresh, clean and ready to go out and about.
Read more
Health Gadgets

The FoodMarble Aire is a compact and ultra-portable breath-testing device that works together with its Smartphone Companion App, and you can use it as your personal digestive tracker to find exactly what types of food are most compatible with your unique digestive system. With it, you can better understand all of your body's digestive issues in a very simple and convenient manner, all by simply using the FoodMarble Aire Digestive Breath Tester to analyze your breath after eating a meal. Overall, this is a really handy gadget to have around for anyone that commonly experiences /suffers from regular digestive disruption.
Read more
Health Gadgets

What Is the Best Percussion Massage Gun in 2021?

Having a Massage Gun for recovery purposes is great, as these wonderful tools allow anyone to do some at-home physical therapy for muscle recovery.
Read more

Verizon announced its Launching 5G in More Than 30 Cities