Qi (which is simply pronounced “chee”, mind you) is a recently developed wireless charging standard that has been increasingly getting adopted by most major Smartphone manufacturers (Samsung, Apple, Huawei, Xiaomi, etc.), thus making it available for almost every recently released Smartphone from most major phone maker. As such, most Smartphones now offer its users the option to have their phones recharged via Qi Wireless Charging, which is obviously a very convenient feature to have, as you never have to deal with tangled cables, plugging and unplugging the device, etc. Literally all you have to do is grab your Smartphone, place it on top of your charging pad of choice, and that’s it. Just relax, or do a couple of chores while you wait a few hours, and you’re phone is back to full power. This brings us to one of the most luxurious wireless charging pad for Smartphones that you’ll ever see, and that’s none other than the Eggtronic Wireless Charging Stones.

The Eggtronic Wireless Charging Stones is a gorgeous Qi wireless charging pad for Smartphones that’s partially made out of Stone. With it, you can very conveniently charge your phone without the use of any cables, all while its jaw-dropping and elegant “stony” look highlights and reinforces your choice of home décor.

However, don’t let its stylish “stony” look fool you. While stone might trick you to think that this is a very basic Smartphone charging pad model, then think again. The Eggtronic Wireless Charging Stones can offer up to 10W of wireless charging power transfer for many compatible devices (discussed ahead).

While Qi Wireless Charging is obviously not the only wireless charging method available, it’s the first wireless charging option that was supported by two of the largest, most renowned, and most-influential Smartphone manufacturers, and those are Samsung and Apple.

Qi wireless charging technology is basically an open interface standard that was developed by the Wireless Power Consortium, and this wireless charging standard defines that wireless power transfer can be easily achieved by using inductive charging over distances of up to 1.57 inches (4 cm).

To put it in a more simple manner, this wireless charging standard (Qi) is based on using a charging pad and a compatible device (a Qi-enabled Smartphone) that’s then placed on top of that same charging pad. After that, the charging pad will then charge the Smartphone via resonant inductive coupling.

Now, back to the Eggtronic Wireless Charging Stones. Let’s have a more detailed look at this wireless charging pad for Smartphones that very cleverly combines both elegance and power into a single everyday gadget.

As mentioned before, the Eggtronic Wireless Charging Stones is an elegant charging pad for Smartphones that features a gorgeous smooth Stone body (just partly made of Stone, as it obviously needs to pack some tech. components inside to work).

The entire unit features a very compact and durable design and its stone body obviously makes it quite sturdy. Just be sure not to accidentally drop it to not get its “stony” surface chipped out or broken. Still, in general, the entire unit comes perfectly built, as it seems that no internal components are loose at any point (meaning that those don’t dance around inside the unit like you sometimes see in poorly made tech. devices – cables shaking inside with loose space, etc.).

Additionally, the Wireless Charging Stones charging pad was also designed with durability in mind, as it also comes with an integrated cable that’s built into the unit itself so that users are also offered maximum resistance during use. This way, the cable is ensured to never get disconnected (in a contrary fashion of having to connect both sides of the unit’s power cable – one side to a power plug and the other side to the unit itself).

The Eggtronic Wireless Charging Stones is a wireless phone charger that features a maximum wireless power transfer of 10W, working at standard speed with all Qi-enabled devices.

The Eggtronic Wireless Charging Stones can perfectly provide any of these Smartphone models with fast wireless charging up to 10W.

Lastly, this charging pad is also fully compatible with the Nokia Lumia 735, 830, Icon, 930,1020, and 1520 models, the Sony Xperia XZ2, XZ2 Premium, and the Sony XZ3, the HTC Droid DNA and HTC 8X, with Motorola’s Droid Maxx, Droid Mini, and Droid Turbo Smartphones, and even with the ZTE Axon 9 Smartphone model.

Obviously, as this is a Qi Wireless Charging charging pad for Smartphones, all you have to do to have your Smartphone recharged with this charging pad is simply place your phone laying flat right on top of the charging pad’s Stone surface, and your phone will start charging straight up. 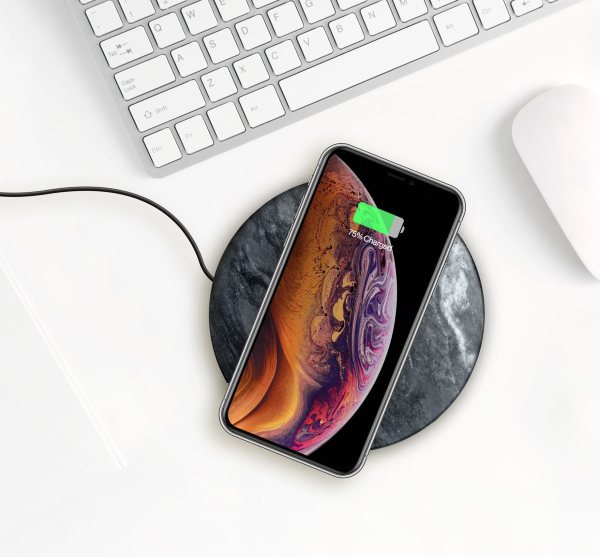 If you’re interested in buying this luxurious Smartphone wireless charging pad, each unit is currently going for $70. You can order yours online, directly from the company’s official shopping page, which you can access by clicking here.