When it comes to staying hydrated, having your own water bottle around is important, as getting your daily water intake is just one of many things that help your body to stay healthy. However, specifically for water bottles, those aren’t as good as they sound, mostly because of the environmental impact associated with all the plastic that’s used to manufacture those bottles, and that’s also becoming a growing political issue. As such, instead of purchasing disposable plastic water bottles, consider going for a more environmentally-friendly choice like the Philips GoZero Hydration Bottle.

The Philips GoZero Hydration Bottle is a reusable and dishwasher-safe bottle that comes equipped with a GoZero Fitness filter, which can easily remove up to 99% of chlorine, which also improves the taste of tap water.

Let’s start with a quote from National Geographic’s written documentary on the story of plastic bottles:

(This highly informative piece was written by Laura Parker, who specializes in covering climate change and marine environments)

“The moment the modern plastic beverage bottle changed the world’s drinking habits is difficult to pinpoint. The day New York supermodels began carrying tall bottles of Evian water as an accessory on fashion show catwalks in the late 1980s surely signaled the future ahead. Billions of bottles were sold on the promise that bottled water is good for hair and skin, healthier than soft drinks and safer than tap water. And it didn’t take consumers long to buy into the notion that they needed water within reach virtually everywhere they went. 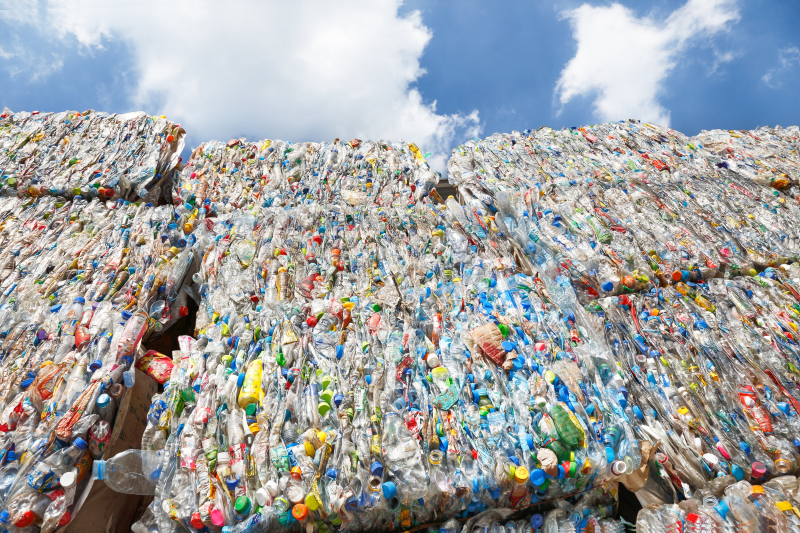 Then, if one analyzes just the daily wastage of plastic bottles, collected data from Euromonitor International shows that more than 480 billion disposable plastic water bottles were sold last year alone. That’s almost 1 million plastic bottles sold each and every minute. Not only that, but a very sad truth is that a horrifying high-volume of those same disposable plastic water bottles tend to end up in landfills and incinerators every day, and that’s simply terrible for the environment.

Furthermore, another thing that doesn’t help the environment is that the market of disposable plastic bottles keeps growing at an alarming rate, as well as their consumption.

So, let’s go back a few years. Just in the US alone, around six times as many plastic water bottles were thrown away during 2004 when compared to the plastic bottle wastage from 1997. During that time, US citizens alone consumed around 50 billion water bottles per year, which averages about 13 bottles per month for every person in the U.S. Nowadays, that number has increased exponentially, and several studies show that the daily consumption of disposable plastic water bottles will most likely just keep increasing.

Now, let’s take a more detailed look at the Philips GoZero Hydration Bottle and check everything that this bottle has to offer.

Starting with the bottle’s size, the Philips GoZero Hydration Bottle features a maximum capacity of 20 oz. (or 590ml).

While the bottle’s design is quite minimalist, its leak-proof design ensures that the water doesn’t spill inside your bag.

The bottle comes equipped with a dust-proof cap, and that basically ensures that its mouthpiece stays clean at all times. Not only that, but the bottle is completely made of BPA-free LDPE materials, which also make most of the bottle’s parts dishwasher-safe (max. 122 °F / 50 °C).

The only thing that’s not dishwasher-safe is the bottle’s activated carbon filter. As mentioned earlier, this filter is the company’s GoZero Fitness filter, which is made of an innovative activated carbon fiber, allowing it to easily remove up to 99% of chlorine, and other taste impairing substances without compromising the water flow. 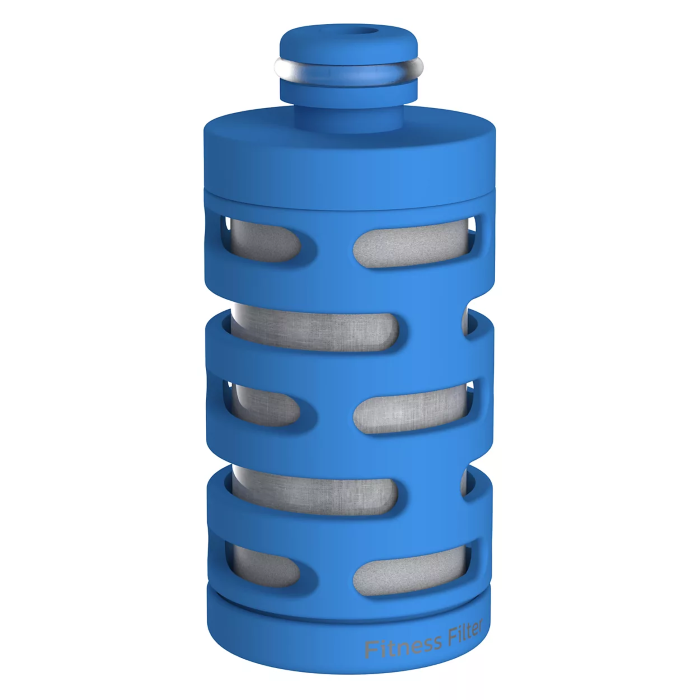 Thanks to that, the water from your choice of water-source will taste even better, all while the bottle’s simple and minimalist design ensures that all you have to do is fill in the bottle, give it a squeeze, and drink refreshing and ultra-clean water. 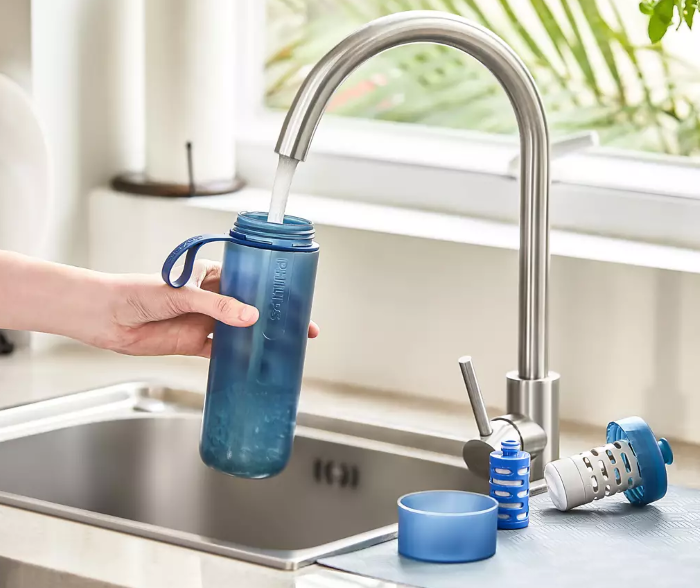 This GoZero Fitness filter (model number #AWP286/AWP287) lasts you around 1 month of use. Additionally, each filter cartridge also comes with a very convenient built-in indicator that lets you know when it’s time to replace the bottle’s filter.

While the GoZero Hydration Bottle only comes with one filter cartridge, you can easily purchase super-affordable packs of three (x3) replacement filter cartridges straight from Amazon (which is where the company sells the bottle aswell) for just $15 per each 3-pack of filter cartridges. 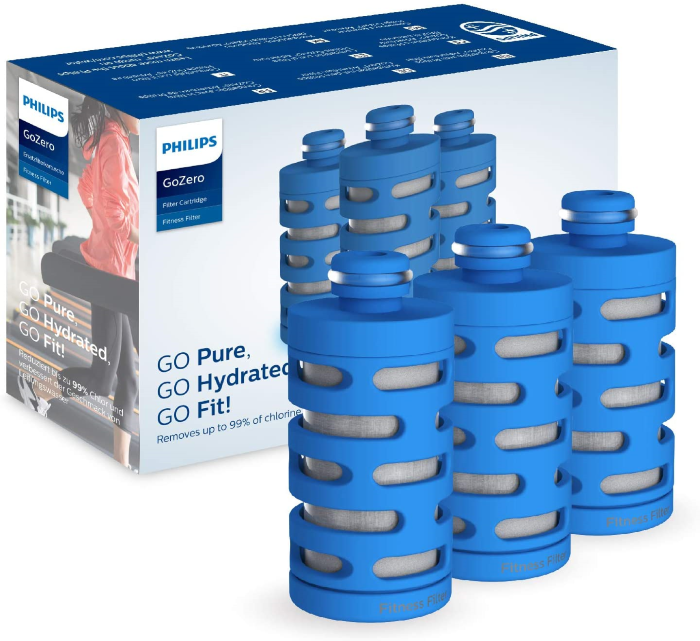 The filter that comes with the bottle is also quite easy to install. Take a look at the company’s official Unboxing Video (embedded below) to see how:

Thanks to all of the features offered by the GoZero Hydration Bottle, you can get delicious and ultra-clean water at a fraction of the cost of disposable plastic water bottles, while also reducing the wastage of disposable water bottles.

The Philips GoZero Hydration Bottle is a reusable and dishwasher-safe bottle equipped with a GoZero Fitness filter that can remove up to 99% of chlorine, which also improves the taste of tap water.

With it, you can greatly help you to reduce the environmental impact caused by disposable plastic water bottles.

If you’re interested in buying the GoZero Hydration Bottle, each unit going for just $12.74. You can purchase it online right now, directly from Philips’s official shopping page, or directly from Amazon’s shopping page, which can both be accessed by simply clicking the provided links.

The Larktale chit chat plus Stroller is a high-end lightweight recyclable baby stroller that features very intuitive functionalities while also helping you to reduce your eco-footprint. Overall, this high-end recyclable baby stroller is perfectly suitable for any newborn babies, and also comes equipped with literally everything that parents of newborns would need to properly take care of their babies while enjoying a nice stroll outside.
Read more
Health Gadgets

The UVCare Portable Germinator 2.0 is a portable sterilization system that can be used to sterilize enclosed spaces by combining a UV-C Light with Ozone Technology. Overall, this is a very handy sterilization system to have with you at all times, as its built-in UV-C Light and its integrated Ozone Technology can make sure that you're everyday carry items, your car's glove compartment's stored items and even your purchased groceries items are always perfectly sterilized before use.
Read more
Health Gadgets

The Luster Premium White Pearl is a professional light dental-whitening system that can be used as a flexible teeth-whitening treatment solution to remove teeth discoloration by simply following quick 2-minute treatments. Overall, trying out this entire professional light dental-whitening system kit was a very fun experience. The kit is safe-to-follow and comes with guided user instructions that are very easy-to-follow. Additionally, after using it for just one week, you'll most likely start to see visible results and be proud to rock a pearly-white smile like all the celebrities you commonly see on TV and Social Media. With the Luster Premium White Pearl you'll have an affordable and clinically-proven safe-to-follow teeth-whitening method that you can start right from the comfort of your home.
Read more
Health Gadgets

The Acuva SOLARIX is a UV-LED Portable Disinfection Device that can be quickly used on any surface for a 99.9% disinfection method against the SARS-CoV-2 virus. By having an ultra-portable, easy-to-use and effective UV-light-based disinfection device like the Acuva SOLARIX with you in your daily routine, you can have peace-of-mind knowing that you're regularly used items and surfaces are perfectly clean and guaranteed to be germ-free and virus-free.
Read more