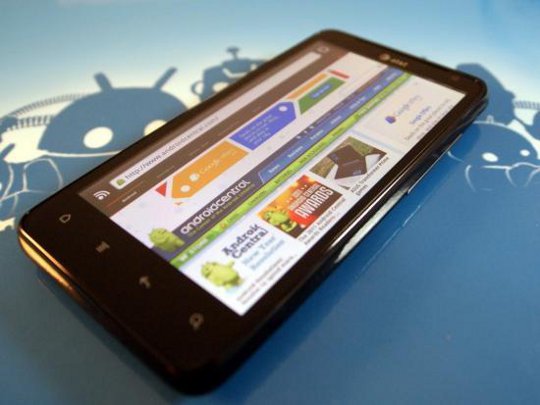 AT&T just announced that their HTC Vivid will start receiving the Android 4.0 Ice Cream Sandwich (ICS) update now.  This update also includes Sense 3.6, and it brings the company’s Beats Audio technology to the 4G LTE handset as well.   The ICS update will deliver advanced voice and text input to the device, along with Face Unlock, UI improvements and improved email.  The HTC Vivid is equipped with a 1.2GHz dual-core Qualcomm Snapdragon chipset, 1GB of RAM, 16GB of internal storage, microSDHC support to add an additional 32GB of storage and a 1,620 mAh battery.

Check out the video by Slashgear and Full Press Release….

DALLAS, March 22, 2012 – AT&T* today announced the availability of Android 4.0 (Ice Cream Sandwich) for HTC Vivid™ customers.  After installing the software update, customers can now enjoy the optimized audio experience of Beats by Dr. Dre Audio™ and new and improved HTC Sense™ experience.  Information about these features and more can be found at http://www.att.com/vividupdate.  HTC Vivid™ will be the first U.S. smartphone to receive Ice Cream Sandwich as an update and the first to be issued by a wireless carrier.  It will be followed by several other AT&T devices in the coming months:

Focused on bringing the power of Android to the surface, Android 4.0 makes common actions more visible and lets you navigate with simple, intuitive gestures. Refined animations and feedback throughout the system make interactions engaging and interesting. An entirely new typeface optimized for high-resolution screens improves readability and brings a polished, modern feel to the user interface.

Face Unlock – Android 4.0 introduces a completely new approach to securing a device, making each person’s device even more personal — Face Unlock is a new screen-lock option that lets you unlock your device using facial recognition. It takes advantage of the device’s front-facing camera and state-of-the-art facial recognition technology to register a face during setup and then to recognize it again when unlocking the device. Just hold your device in front of your face to unlock, or use a backup PIN or pattern.

Beginning today, customers can download the update via Wi-Fi by visiting http://www.att.com/vividupdate. If Wi-Fi is not available, you can download the software upgrade to a PC and install it via sideload. On March 23, HTC Vivid customers who have not downloaded the upgrade will begin receiving an SMS notification of upgrade availability.

Say Hello to Barista Bot. A bean-to-cup coffee machine that’ll make you ask “where ya bean all my life?”